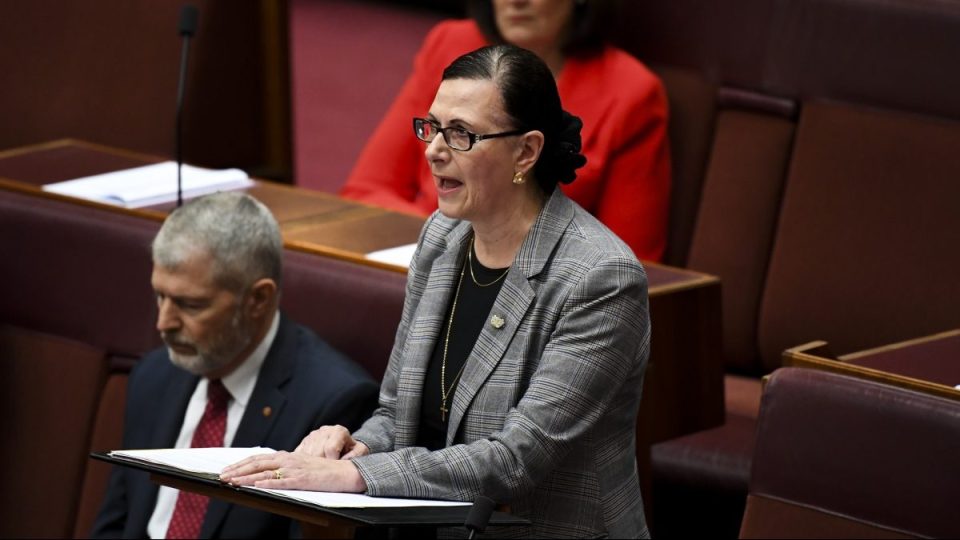 An outgoing Liberal senator has unleashed on Prime Minister Scott Morrison, branding him a manipulator who uses his faith as a “marketing advantage”.

Concetta Fierravanti-Wells, who has lost her NSW Senate preselection, used a speech to Parliament on Tuesday night to provide “clarity and context” on her leader.

“He is adept at running with the foxes and hunting with the hounds, lacking a moral compass and having no conscience,” she told the Senate.

On a media blitz to sell the federal budget on Wednesday, Mr Morrison brushed off the criticism, describing it as simply part of the territory in the top job.

“It comes with the job. You’ve got to have a thick skin and you’ve got to be able to focus on the things that matter most to Australians.”

Senator Fierravanti-Wells also branded Mr Morrison an “autocrat” and told Parliament he allegedly made racist comments during his preselection for the seat of Cook in 2007.

“I’m advised that there are several statutory declarations to attest to racial comments made by Morrison at the time that we can’t have a Lebanese person in court.”

She also accused him of going to Labor senator Sam Dastyari to get dirt on Michael Towke after he won the first round of the ballot 84 votes to Morrison’s eight.

“This dossier of anecdotes was weaponised and leaked to the media to the point where Towke’s reputation was destroyed,” Senator Fierravanti-Wells said.

“After the selection, Towke joined my staff, he subsequently also sued the newspapers for defamation. He won his cases, but this was cold comfort. Morrison, his cronies and the Liberal establishment in NSW had destroyed a good young man.”

Senator Fierravanti-Wells said Mr Morrison and Mr Hawke had deliberately contrived a crisis in the NSW branch of the Liberal Party for a year so they could have their own candidates installed.

“There is a putrid stench of corruption emanating from the NSW division of the Liberal Party,” she said.

“I am appalled [party president Philip Ruddock] has allowed Morrison to bully his way to a situation where the next election has been put at risk all to save Hawke’s career.”

Mr Hawke was facing a preselection challenge for his seat of Mitchell but was re-endorsed.

Senator Fierravanti-Wells said the actions of Mr Morrison and Mr Hawke had led NSW Liberal members to lose faith in the Prime Minister’s leadership and the party.

“They want to leave. They don’t like Morrison and they don’t trust him,” she said.

“They continue to despair at our prospects at the next federal election and they blame Morrison for this.”

Senator Fierravanti-Wells’ comments came after she was relegated to an unwinnable spot on the Liberals’ NSW Senate ticket.

“I know Connie’s disappointed that on the weekend 500 members of the Liberal Party went to a preselection and they didn’t select Connie,” Mr Morrison said.

“When you are Prime Minister, people hold you responsible for many, many things and there are decisions taken over your life as prime minister that can lead to disagreements.”