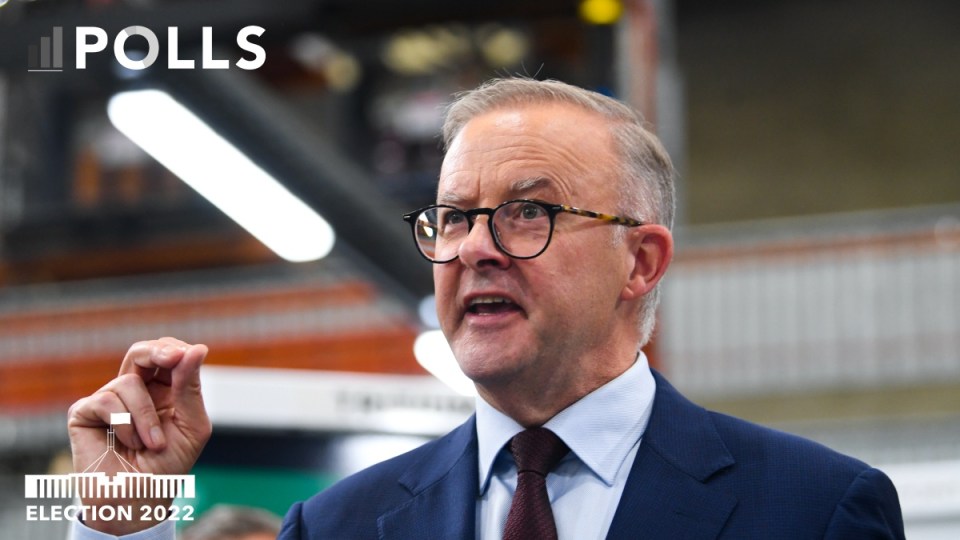 Anthony Albanese is still paying for a mistake on day one of the campaign, according to a Roy Morgan poll.
exclusive

Anthony Albanese is still paying for a momentary mistake on day one of the election campaign, with a Roy Morgan poll showing the government stealing a lead on primary votes before Labor can even change course.

But on the main measure of support the ALP has maintained the bulk of its commanding two-party preferred lead, the poll, covering  the opening phase of the campaign between April 11 to April 17, finds.

The Coalition’s projected vote share after preferences is up 2 points after the first week but still remains on the wrong side of a commanding 55 to 45 per cent lead.

After this early campaign tightening, the two-party preferred gap between the two major parties is closer than it has been for six months.

On primary votes a shift in voters’ support is more pronounced. . 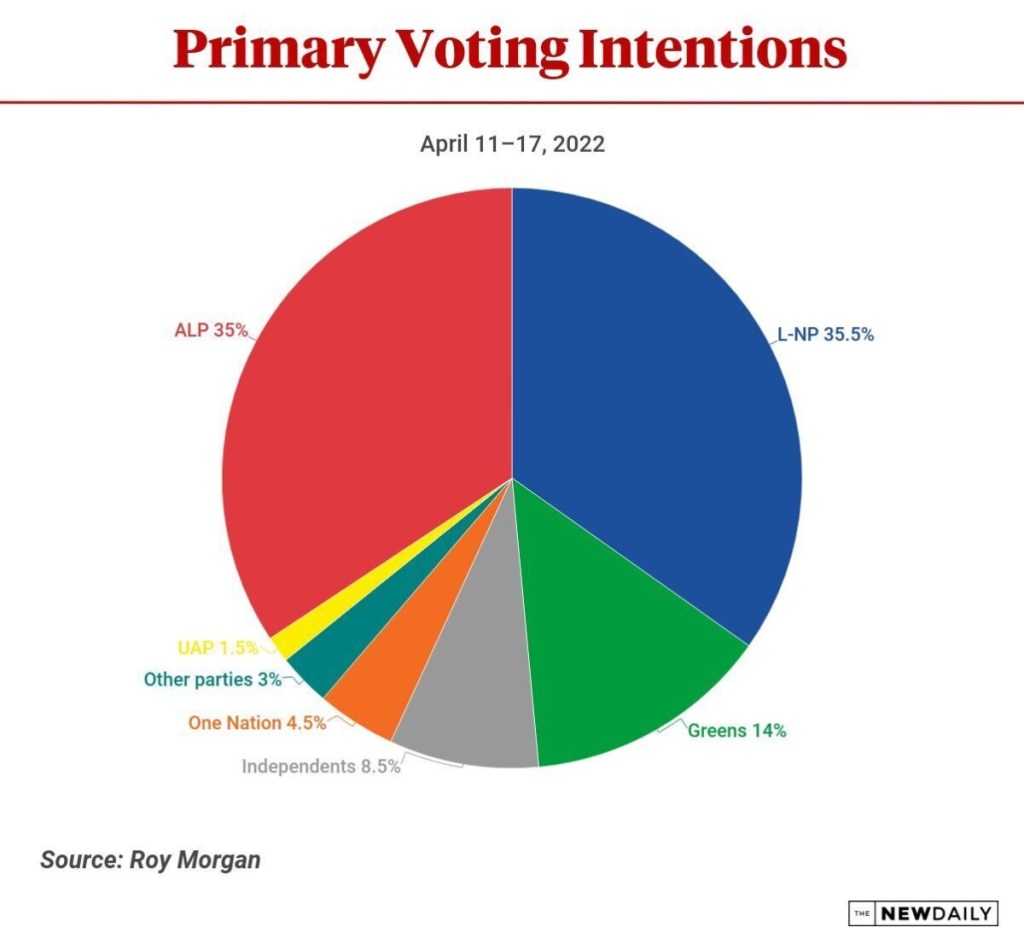 That makes for a slight but sudden crossover many months since late last year’s strong poll lead was first established by Labor over the Coalition.

This is the first poll to have the Coalition in front on primary votes for essentially half a year.

The shift shows how decisive moments on the campaign trail can be for changing voters’ minds.

Roy Morgan chief executive Michele Levin said a flubbed question on the cash rate took only to a few seconds to play out but more than enough time for a voter’s hesitation about Labor’s approach to economic management to crystallise.

“The media commentary around Mr Albanese’s ‘gaffe’ highlighted the fears many Australians have about the ALP’s ability to manage the economy,” Ms Levine said.

“Australians have consistently regarded the LNP as better economic managers than the ALP.”

The Greens, by contrast, benefitted from some time on centre stage.

The party is riding high after it absorbed the fall in Labor’s primary support and change to add 1.5 points to its vote share of 14 per cent, putting them in their best position since the last election.

Perhaps part of that improvement can be put down to an assured and substantial leader’s address by Adam Bandt at the National Press Club bursting with new and costed policies. But his biggest moment of mass appeal came as he skilfully dismissed another gotcha question from the gallery.

“Mr Bandt told the journalist to ‘Google it, mate’ – and this strategy appears to have paid off,” Ms Levine said.

“It appears some ALP voters frustrated with Albanese’s lack of knowledge concerning interest rates and unemployment decided instead to switch their vote to the Greens.”

The Greens estimated primary vote share is an advance of what the party netted at the last election. Labor’s is marginally better than at its last showing but below a healthy level; and for the coalition, almost six points off the surprise show of support that returned it to power last time.

The weak primary figures are likely to heighten speculation that voters could deliver a hung parliament at the May poll.

Support for independent candidates is a potential wild card in inner-city seats such as Wentworth and Goldstein where MPs face challenges. But national measures in support for independents are not designed to capture the relatively smaller shifts that will determined seat-by-seat contests.

Campaign momentum switched to the Coalition after Mr Albanese could not answer questions about key economic indicators, including the unemployment rate, at the outset of campaigning last Monday.

The lapse was the basis for further and persistent questioning of Labor’s economic management which greatly influenced media coverage, something critics sought to use to frame the entire election.

Electors who did not declare support for any candidate were at 6.5 per cent, a figure unchanged from last week.

Prime Minister Scott Morrison made a beeline for the Western Australian border early in the second week of campaigning.

Following a rapprochement with the state’s Premier, Mark McGowan, the Coalition is seeking to rebuild its support in the west that had been badly damaged during a row over COVID borders. 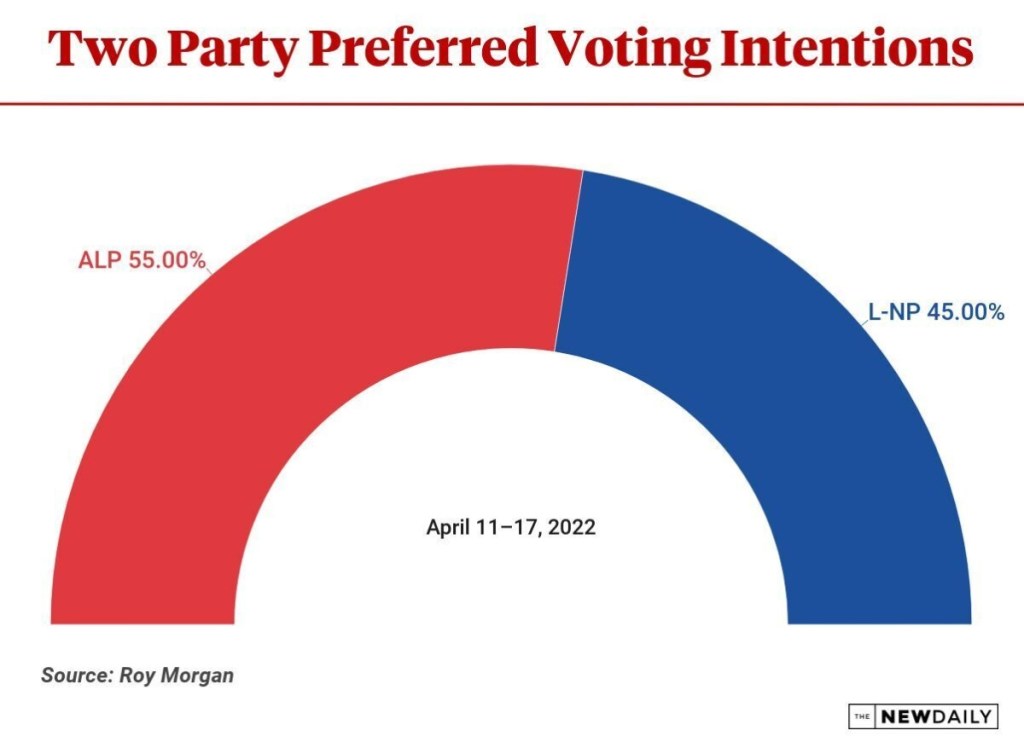 Mr Albanese, meanwhile, has made some hay over the government’s broken election promise to legislate a national anti-corruption commission.

Mr Albanese’s pledge to do what Mr Morrison did not and establish one by Christmas brought some much-needed contrast to voters’ perceptions.

But Labor is still facing persistent questioning over the particulars of a pledge to build new super clinics, which drew a mixed reaction.

And while the gotcha question may not be at the front of journalists’ minds, the cost of stumbling again has risen greatly this election.

Mr Morrison’s time on the hustings has not yet delivered him any triumphs, but the data suggests his strategic look west is just about right.

Labor is ahead in five states and in this poll recorded a substantial five-point gain in its lead in South Australia, which has blown out to a thumping 58 to 42 per cent.

Only WA does not show the opposition the same favour.

In that state the Coalition is now ahead for the first time since last September and ahead slightly 51 to 49 per cent.

The overall tenor of the campaign and the leaders’ relationship with the media seems much less combative after the week ended with some colourful assessments of Mr Albanese’s performance, sourced to Labor insiders.

The gotcha or the gaffe made a brief appearance on Monday, but press conferences no longer seemed like a journalistic answer to the schoolyard game “stacks on”.

It is not, however, clear what might take the place of gotchas and griping.

Nothing would raise the tenor of the campaign more than a sense of competing visions for Australia’s future.

The leaders will tonight get the best chance they have had to make a substantial pitch to voters since Parliament was dissolved.

The leaders debate will take place in Brisbane and will air on Sky News at 7pm.

This Roy Morgan poll is based on a sample of 1384 Australian electors, who are interviewed online and via telephone.