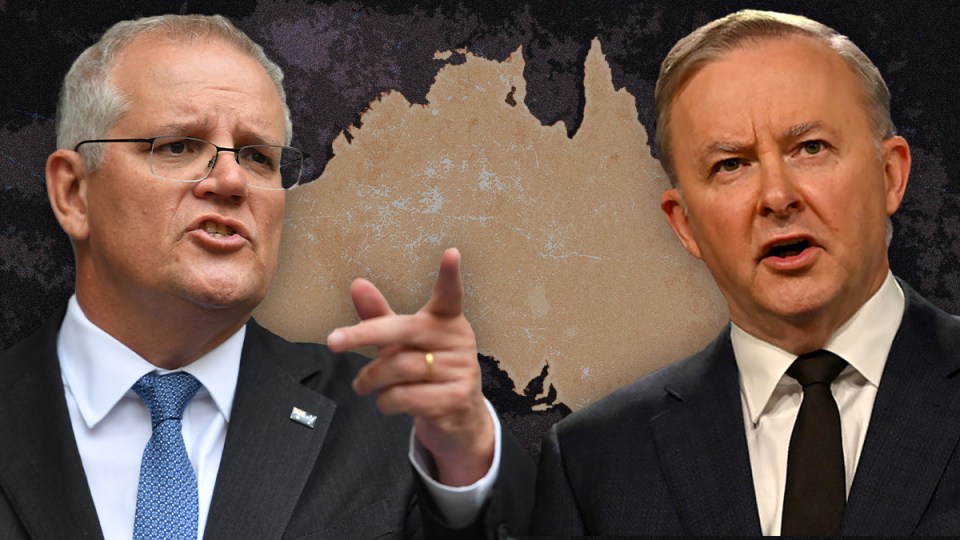 Scott Morrison and Anthony Albanese both shot from the lip, prompting some quick spin therapy by their parties' insiders. Photo: TND

Liberal MPs spent Friday morning trying to walk back Mr Morrison’s lack of enthusiasm for establishing a federal corruption watchdog despite the fact that he made it a key election pledge in 2019.

As their underlings attempted to walk the leaders’ respectives gaffes, Mr Morrison and Mr Albanese attended Good Friday church services after promising to suspend the political warfare on the public holiday.

“One of the great things about Australia is that people are allowed to practise their faith with respect,” Mr Albanese said.

Mr Albanese was joined by the Prime Minister’s wife and former Liberal prime minister Tony Abbott at the Good Friday Mass in Sydney.

Mr Morrison’s wife, Jenny, and their daughters, Abbey and Lily, were greeted by Mr Albanese, as was Mr Abbott. Mr Albanese and Mrs Morrison both gave readings.

Security detail on the mend

Elsewhere, three of the four police officers from the Prime Minister’s security detail injured in a car crash in Tasmania on Thursday are out of hospital.

Two Tasmanian Police officers and one federal police officer have been discharged. A second federal officer is still being treated in hospital for his injuries.

Mr Morrison, who spoke to the two federal officers on Friday, said the incident was a reminder to stay safe on the roads this Easter.

“If you are travelling around of course, please be safe, be careful,” he said.

Mr Morrison wasn’t involved in the two-car crash – he was in a car moving ahead of the accident – and the driver of the other vehicle involved was unhurt. Tasmania Police are still investigating.

Mr Albanese said he spoke to the Prime Minister on Thursday night about the collision and passed on his well wishes to the injured officers.

“This has been fully costed by the Parliamentary Budget Office,” Mr Albanese said on Wednesday.

But Senator Gallagher tweeted late on Thursday that the policy “has not been formally costed by the PBO” and that the $135 million cost over four years was “based on work done by the PBO”.

Mr Albanese echoed Senator Gallagher on Friday, saying the policy had been fully costed based off work by the PBO.

“They were informed by the PBO work and all of our policies will be fully costed,” Mr Albanese said.

Meanwhile, government frontbenchers Stuart Robert and Simon Birmingham spent Friday saying the coalition would try again to establish a federal anti-corruption watchdog after Mr Morrison backflipped on a promise to set it up after the 2019 poll.

“We will come back again and we will seek, through a bipartisan level, to get that going,” Mr Robert told Nine Network.

Mr Morrison and Mr Albanese will go head-to-head in their first debate of the election campaign on Wednesday in Brisbane ahead of the poll on May 21.