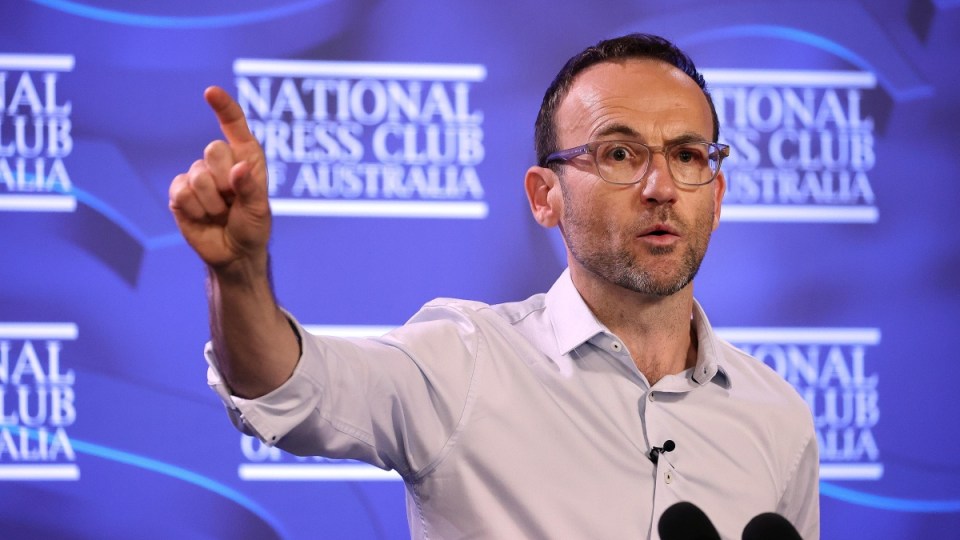 Greens leader Adam Bandt has blown up at a journalist who aimed a “gotcha” question at him on Wednesday.

Mr Bandt was addressing the National Press Club in Canberra when he was asked by a Financial Review journalist if he knew the current wage price index data.

“If you to know why people are turning off politics, it’s about what happens when you have an election that increasingly becomes this basic fact-checking exercise between a government that deserves to be turfed out and an opposition that’s got no vision. This is what happens.”

The WPI is a major measure of inflationary pressure on wages and salaries.

Wednesday’s clash came days after Opposition Leader Anthony Albanese was caught short when he was asked for the official cash rate and unemployment figures while campaigning in Tasmania on Monday.

That stumble has sparked a wave of similar questions on employment and interest rate data to government MPs and state and territory leaders.

“Those questions are designed to show that politicians are somehow out of touch and not representative of everyday people. News flash! Most of the people in Canberra are on six-figure salaries, just passing time until they go out and work for the coal and gas corporations and get a six or seven-figure lobbying job.”

When the journalist persisted with a question about the Greens’ policy to tax business “super profits”, Mr Bandt again fired up.

“Again, it’s in our policy. Just go and Google it and have a look at it,” he said.

The Greens want a 6 per cent tax on the wealth of Australia’s more than 130 billionaires and a corporate “super profits tax”. That would compel businesses to hand over profits after they make $100 million.

“The Greens will make Clive Palmer pay more tax so you can fix your teeth,” Mr Bandt said.

Earlier, he spoke of a framed picture of a coal-fired power station in Victoria’s Latrobe Valley that hangs in his office. It was given to him by the power station, which Mr Bandt said signified the Greens’ support for coal and gas workers.

“I have assured these communities that coal and gas workers are not the enemy. We are all in this together,” he said.

“Our enemy is the climate crisis. The enemy is fuelled by coal and gas. Mining and burning coal and gas are killing people.”

Using his first official address since the campaign started, Mr Bandt outlined the minor party’s pro-climate, pro-social welfare policies, confident the Greens would hold the balance of power after the federal election.

“No more coal, no more gas. When we are in the balance of power after the election in the Senate and the House and have kicked the Liberals out, this will be our key demand,” he said.

Mr Bandt is confident about the party’s prospects at the May 21 poll, claiming the Greens could pick up three new Senate seats, including one in Queensland.

The Greens are polling at 14 per cent of the vote in the Sunshine State, but Mr Bandt said there was potential to win a Senate seat off One Nation.

One Nation leader Pauline Hanson announced on Wednesday that maverick former Coalition member George Christensen would be her party’s No.3 on the Senate ticket.

At the 2019 election, the Greens scored 10.4 per cent of the national primary vote and Mr Bandt retained the party’s only lower house seat of Melbourne.

‘Google it’: Greens leader blows up at journalist