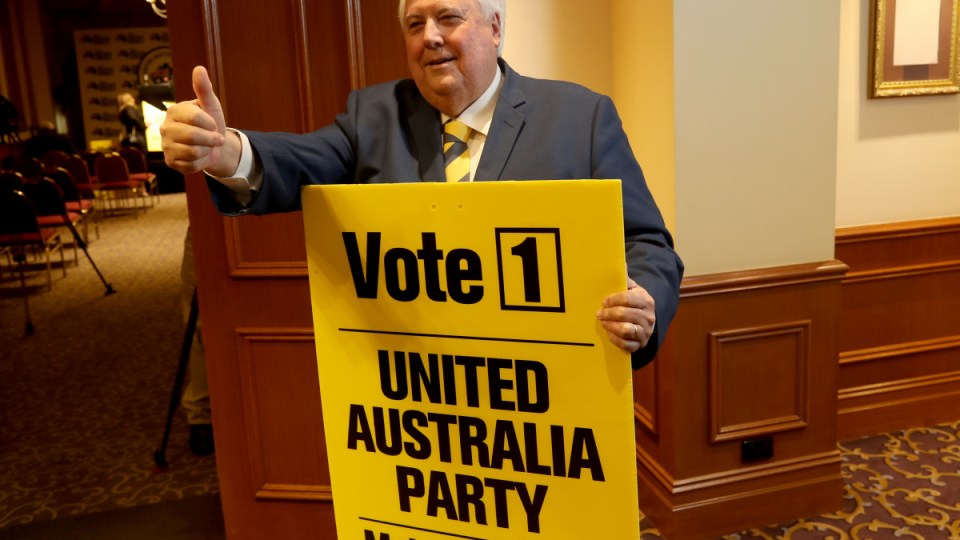 Clive Palmer spent more than $80 million on the 2019 federal election – despite not winning a single seat. Photo: AAP

Clive Palmer dropped a whopping $83 million on his failed bid to re-enter politics, according to new data from the Australian Electoral Commission.

The billionaire’s Mineralogy company donated $83.6 million to the United Australia Party for the campaign – and did not win a single seat in either house of Parliament at the May 2019 election.

But the businessman has previously told The New Daily he credits his spending and the negative campaign against ‘Shifty’ Bill Shorten with delivering Scott Morrison a surprise victory.

Predictions of his cash splash had previously estimated his expenditure at about $60 million.

Former Greens leader Richard Di Natale, who quit the leadership and announced his exit from politics on Monday said the spendathon represented all that was wrong with Australia’s political system.

“That’s not a democracy, that’s actually somebody buying influence,” he said in Canberra.

“That’s one of the biggest problems we face in our politics, we’ve got to clean it up.

“If you want to have people’s voices represented in this place, we’ve got to get donations reform – we haven’t made enough progress on that.”

Labor’s own filing to the AEC reveals that a $50 million war chest was not enough to secure victory against the combined might of the Liberal Party and Mr Palmer.

According to the AEC documents, Labor is $1.6 million in the red after it underestimated its primary vote and, by extension, the public funding it could expect. Nearly $600,000 of that is owed to Facebook and Google.

By comparison, the Liberal Party amassed a $48 million war chest and notified the AEC of $4.6 million in debts.

The debts include a $2 million loan from a fund-raising vehicle the Greenfields Foundation and $575,698 to the Crosby Textor polling and campaign outfit. The Liberal Party also owes $297,000 to Google.

The AEC disclosures also reveal that Victorian MP Gladys Liu donated $90,000 to her own campaign in the dying days of the closely fought May 18 poll.

Billionaire Anthony Pratt, who was at Mr Shorten’s election-night function, donated $3 million to both major parties.

Unions, including the CFMEU, remained big donors to the Labor Party.

The full list of donations can be seen here.