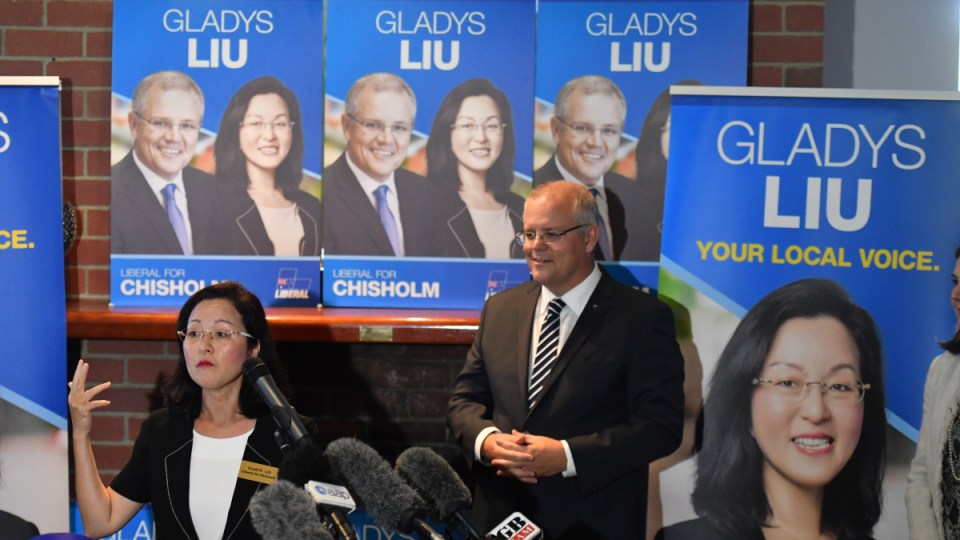 Gladys Liu launched her election campaign with Scott Morrison at her side. Photo: AAP

Federal government frontbencher Stuart Robert is satisfied with the declarations his Liberal colleague Gladys Liu has made as a member of parliament.

But he says the embattled MP is double-checking both the donations she has helped to raise for the party and her previous associations prior to getting elected to the Victorian seat of Chisholm in May.

Ms Liu is under fire over donations for the Liberal Party which have been put at $1 million, and possible previous links to the Chinese Communist Party.

“The issue isn’t the quantum, the issue is the declaration. Transparency is important in our democracy,” Mr Stuart told Sky News on Sunday in reference to the $1 million of donations.

He said Ms Liu is double checking her donations declarations.

“I’m satisfied that she is going through her associations, she’s double checking that to ensure that they are declared or that she removed herself from them,” he said.

“So I’m highly satisfied with what she has done.”

However, federal Labor and other opposition parties are unlikely to let Ms Liu off the hook when parliament sits this week.

Senior Labor frontbencher Mark Butler says Prime Minister Scott Morrison should be encouraging Ms Liu to answer all the questions that have been raised in the past week.

“This matter should be dealt with promptly,” Mr Butler told the ABC’s Insiders program.

Mr Morrison has described such scrutiny as having “grubby undertones” which has been interpreted as meaning racist.

“The idea that these questions that have been raised by every media organisation in the country and have been pursued in the parliament by (Labor’s) Penny Wong and Mark Dreyfus are motivated by race is utterly absurd,” Mr Butler said.