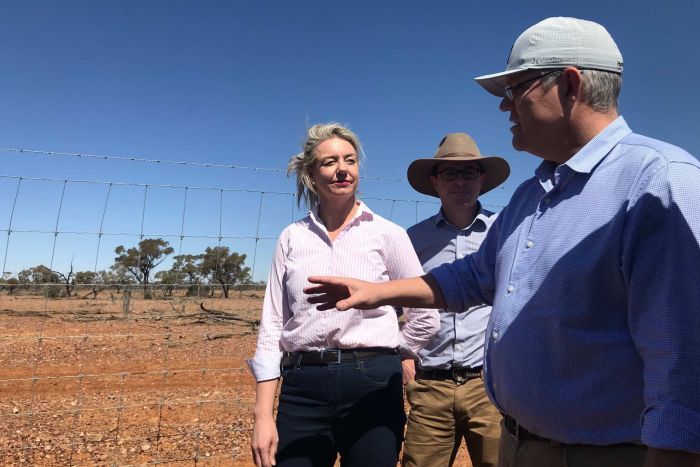 Almost half of the councils the federal government announced would be eligible for a $1 million drought grant during the election did not meet the funding criteria.

The Prime Minister, Deputy Prime Minister, and Drought Minister announced last year if the Coalition was elected it would add 14 local government areas to the list of councils eligible for grants of up to $1 million.

But a response provided as part of Senate estimates shows that six of the councils did not meet the requirement that at least 17 per cent of workers in the local government authority be employed in agriculture.

The criteria for the fund became the subject of contention late last year, when Victorian shire Moyne, experiencing one of its best springs in years, rejected the opportunity to apply, despite being considered eligible.

The program was also questioned when drought-stricken Moira Shire, also in Victoria, was deemed ineligible for the grant because 16.9 per cent of its workforce was employed in primary industry, despite it being in drought.

This week, Moira Shire was made eligible, when the government added 52 councils to the list of those invited to apply for the Drought Communities Program.

Of the 14 councils announced eligible as an election commitment in April 2019, 13 were in Coalition-held electorates and just one – Alexandrina in South Australia’s Mayo – was independent.

Michael McCormack and David Littleproud’s offices referred the ABC to Agriculture Minister Bridget McKenzie, who was the Minister for Regional Services when the 14 councils were added to the Drought Communities Program.

A spokeswoman for Senator McKenzie said “the Minister rejects the characterisation of the program, which delivered much-needed funding to drought-affected areas”.

“The aim of the program was to get support to where it was needed.”

Senator McKenzie is under pressure to resign over her role in the $100 million community sports grants program, which has been criticised for political bias.

Responding to the revelation that six of the 14 councils did not meet eligibility criteria for the drought programs, opposition spokeswoman Catherine King said the government must “come clean” on why it had invited those councils to apply for the funding.

“Australians are fed up with the secrecy and political games from the Morrison government on the drought,” Ms King said.

Speaking in Blayney on Tuesday, Mr Littleproud announced the eligibility criteria for the Drought Communities Program had changed following advice from consultants EY.

“In light of the harshness of those recommendations, we’ve allowed for the agricultural employment to also include the downstream employment.

“Those in the processing sector, in abattoirs, to be included in our total agricultural employment data number, but also reduced that from 17 per cent to 12 per cent and allow and prescribe a defined allowance for the Minister to make a decision, down to 7 per cent.”

There are 163 councils across Australia eligible for the Drought Communities Program.

Government ignored its own criteria in awarding drought grants