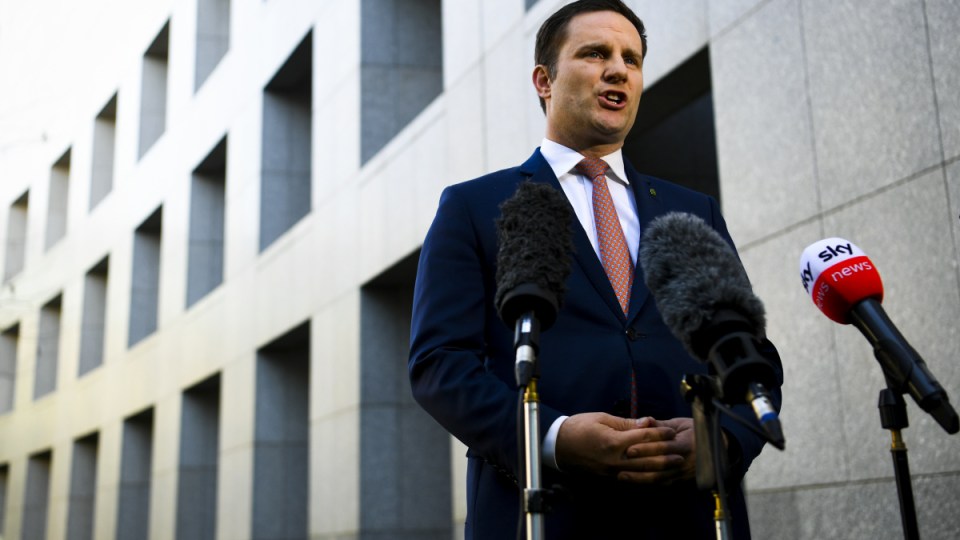 Alex Hawke has succeeded despite his many enemies and condemnation from Alan Jones, Miranda Devine and Peta Credlin. Photo: AAP

Alex Hawke made a career out of exploiting divisions in the Liberal Party and has been at the centre of some of the most infamous political manoeuvring in its history.

Now the shoe appears to be on the other foot.

The Liberal numbers man has been named as masterminding a plot to have the party’s New South Wales branch dissolved so candidates in a dozen seats could be installed without a vote of grassroots members.

Calls for Mr Hawke’s resignation have been made, but Liberal sources say there are growing calls for the party to go even further.

“What’s the difference between losing 16 and losing 17 seats?” one Liberal said when asked the impact on the party room. “A silver lining.”

When Tony Abbott this week said that “heads have got to roll” in the NSW Liberals for “those who’d played the factional game”, there was no doubting who he meant.

Leaders in an otherwise divided party back a plan by Senator Andrew Bragg to cut operators like Mr Hawke out of preselections by making it harder for member ballots to be cancelled .

Open preselections are already official Liberal policy after party members voted overwhelmingly for reform five years ago, only to ignore it this year.

Mr Hawke has succeeded despite his many enemies and condemnation from the likes of commentators Alan Jones, Miranda Devine and Peta Credlin.

Prime Minister Anthony Albanese, in a 2006 media release, said Mr Hawke was “well known for his extremist views and tactics within the Liberal Party”.

This reputation was cemented by what critics allege was Mr Hawke’s first documented disloyalty, a story that has become Liberal legend.

Mr Hawke was a long-time ally and staffer for David Clarke, leader of the dominant faction in NSW called “the Taliban” for its members’ uncompromising views.

But after Mr Clarke supported his protege’s preselection for the seat of Mitchell, Mr Hawke battled him for control of political territory, which he won.

Mr Hawke spun off his own political faction, the centre-right, known to detractors as the “ambition faction” for bringing all of the tactics employed by moderates and conservatives without the burden of their convictions.

One of the first to sign up was Scott Morrison.

Mr Hawke was named as a leader of a plot to vote for Peter Dutton in a leadership spill to make him overconfident and PM Malcolm Turnbull wounded all to help undeclared candidate Scott Morrison.

“There’s a lot of cleaning up to do in the NSW division of the Liberal Party,” Mr Dutton said this week.

“There was an un­acceptable arrangement in relation to preselections at the last election.”

Mr Dutton’s deputy, Sussan Ley, has denied involvement in Liberal factions, but party sources have long said she aligns with the centre-right.

Leading up to the election, Mr Hawke did not show up to 10 months’ worth of meetings on a Liberal panel reviewing preselections, on which he represented Mr Morrison.

So nominations stalled; the factions tried to broker a deal in secret.

Mr Hawke declined to comment in response to a text message from The New Daily but has said he was motivated by a desire to protect women candidates for Parliament and that Mr Morrison always protected the party.

But one Liberal MP says views in the Canberra party room are changing: ‘‘Everyone … is starting to twig that Hawke led and Morrison followed him on this.’’

A factional peace plan pitched by Mr Hawke failed and the federal Liberal Party had little choice but to back Mr Morrison’s proposal to take over.

“The state and federal party must not allow such manipulation of the constitution to ever happen again,” he said.

Mr Hawke and Ms Ley kept their seats, as did Jenny Ware in Hughes, held by Craig Kelly, who quit the party in the last parliament, but otherwise all other hand-picked candidates lost.

Critics say Mr Hawke is irredeemable and point to an article by Paul Sheehan about the party’s 2010 election campaign: “For tactical reasons Hawke and his allies delayed several preselections in federal NSW seats – crucially Greenway and Lindsay – for six months. The seats were lost and with them the election.”

Now an effort to pull together support to have Mr Hawke investigated has the backing of some state Liberals senior in the party’s conservative wing but also its moderate faction.

The allegations are old but they also have not been dealt with, and the body responsible for disciplining and expelling party members has recently moved on them.

The complaint relates to a Liberal branch meeting that took place in a funeral home in suburban Sydney and accuses Mr Hawke and one branch official of falsifying meeting minutes.

The written allegation says 10 members were admitted with no objections but that this decision was reversed over fears they might be factional enemies, a reversal not contained in new minutes.

One source who had reviewed the evidence held by Liberal headquarters said Mr Hawke would have a strong case to answer but there was no political will to continue inquiries.

Sworn statements place Mr Hawke at the meeting, the source said, and contradict the official record given to the Liberals, and match contemporaneous texts sent during the meeting.

Mr Hawke was then the new Special Minister of State, a portfolio with responsibility for rules on entitlements and finances.

When the allegations emerged Alan Jones called for the case of the Baulkham Hills Branch to “come before the courts” and said Mr Hawke was a “professional branch stacker”.

The New Daily makes no suggestion of wrongdoing on Mr Hawke’s part or any knowledge of any affairs such as those outlined in the complaint.

But the political climate has changed – and rapidly.

The Liberals were seemingly not interested in the complaint for three years. One witness had also sought to withdraw their allegations in circumstances officials privately described as unusual.

But last June, as Liberal antipathy toward Mr Hawke and the former PM grew, legal advice was obtained by the party and one of its members and the state executive voted to have the branch suspended.

That would have cut Mr Hawke’s votes if a preselection had been held; critics believe a fear of “getting rolled” explains delaying tactics.

The matter had been destined to remain on the back burner. Since the election, it’s being reviewed with new interest.