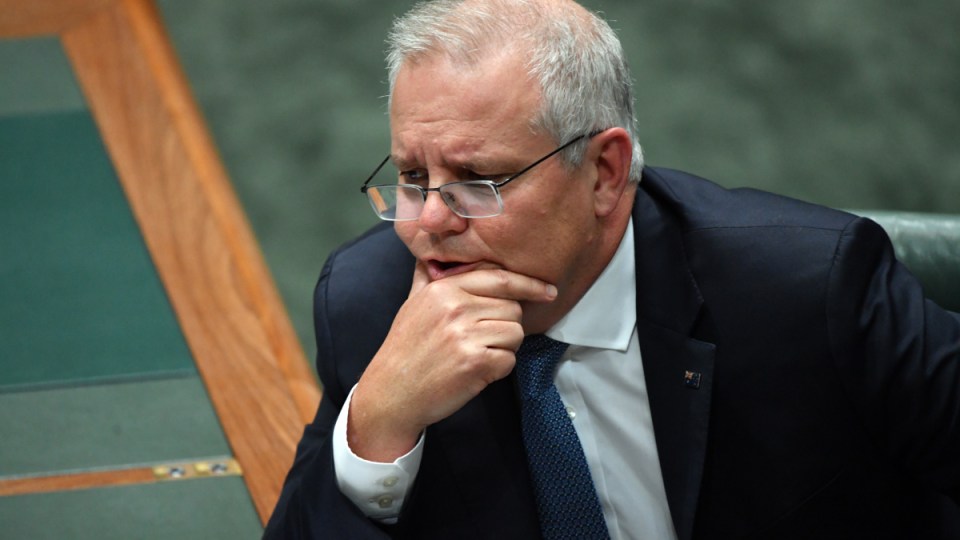 In trouble: the Prime Minister's political woes are now a problem for his allies.

As Scott Morrison’s authority over the Liberal party room wavers, the Prime Minister and his political allies appear to have become ensnared in factional battles.

All now seem likely to face competitive preselections and the possibility of losing their seats as a political brawl ensnaring the Prime Minister, his faction and the party’s New South Wales branch rolls on.

Last week, the state executive of the NSW Liberal Party refused to endorse a power-sharing arrangement that would have guaranteed the party’s endorsement of Mr Hawke, Ms Ley and Mr Zimmerman.

The deal was sunk after the party’s top NSW power brokers declined to endorse the deal.

Some 16 were against, one abstained and only seven were in favour of its passage.

The MPs could now face the scrutiny of a party plebiscite in which their return would be far from guaranteed.

Political gridlock has now left a cloud over preselections for several Liberal seats in NSW, which accounts for close to one-third of the national vote.

Many of the preselections were meant to have been resolved as early as last May.

Increasingly, members of the NSW Liberal’s conservative and moderate wings are united in a push to oust members of Scott Morrison’s centre-right faction, which includes MPs such as Mr Hawke – perhaps the faction’s most active federal member – and long-standing member Ms Ley.

The level of anger towards Mr Hawke, Mr Morrison’s main lieutenant and designated negotiator, is difficult to overstate.

“This is about making sure that … Hawke doesn’t get [into Parliament again],” according to one senior federal MP, who said party members were now acting on pent-up anger over past factional manoeuvres and a failure to reach a compromise on the current gridlock.

“[Scott] Morrison has brought all of this on himself. Why would you put Hawke in charge of NSW?” the MP told The New Daily.

“The PM has to bear the blame for all of this.”

Mr Hawke, who did not respond to a request for comment, was one of the main negotiators of the deal that would have guaranteed his own, Ms Ley’s and Mr Zimmerman’s preselections, but which has now been vetoed.

Mr Zimmerman and Ms Ley also did not respond to a request for comment.

Another sitting minister potentially forced to face a competitive vote rather than a guaranteed preselection would be Foreign Minister Marise Payne, a member of the moderate wing currently guaranteed top spot on the party’s Senate ticket.

Also in frame for challengers are a handful of other presumptive party candidates for seats such as Greenway and also the high-profile moderate factional player Alex Dore, who was meant to be installed in former Liberal Craig Kelly’s Sydney seat of Hughes.

Members of the party’s other factions did little to distance themselves from claims of widespread anger with the Prime Minister’s centre-right faction.

“There is hope of a grand factional bargain unfolding …” said one federal MP, while declining to say anything more declarative about the chances of its prevailing.

Although Mr Zimmerman and Senator Payne could be exposed to competitive preselections, both would have strong chances of retaining their seats due to their prominence and that of their moderate faction.

Whether the same can be said about the party’s centre-right division and Mr Morrison’s political allies is unclear.

One NSW powerbroker said that the party’s centre-right faction had actively worked to stifle not only competitive preselections in seats such as Mr Hawke’s NSW division of Mitchell, but also outstanding investigations into claims key branches such as Sydney’s Baulkham Hills had refused to admit new members as part of a factional scheme to ward off rivals.

“It’s hopeless,” the NSW Liberal said of the centre-right faction’s attempts to stave off preselection challenges.

“Morrison is being torn apart on his right and laughed at on his left.

One possible option for Mr Morrison – a former factional heavyweight and state director of the party – is to seek to delay any possible challenges and appeal to the party’s federal division to intervene in the NSW branch by either imposing control over party preselections or in a wholesale takeover.

There are only limited circumstances in which such a deal could be achieved legally; it would require broad federal support among the party’s power brokers.

And members of the party’s NSW branch say that any such moves would be met with court challenges and that legal teams have already been briefed and stand ready to oppose them.

The factional trouble comes as the Liberals on Tuesday attempt to convene the federal party room for the first time this year in the name of shifting the national conversation towards boosting the economy and away from reports of internal disloyalty.

Parliament will sit for the first time this year on Tuesday.

The decline of Scott Morrison spells trouble for allies