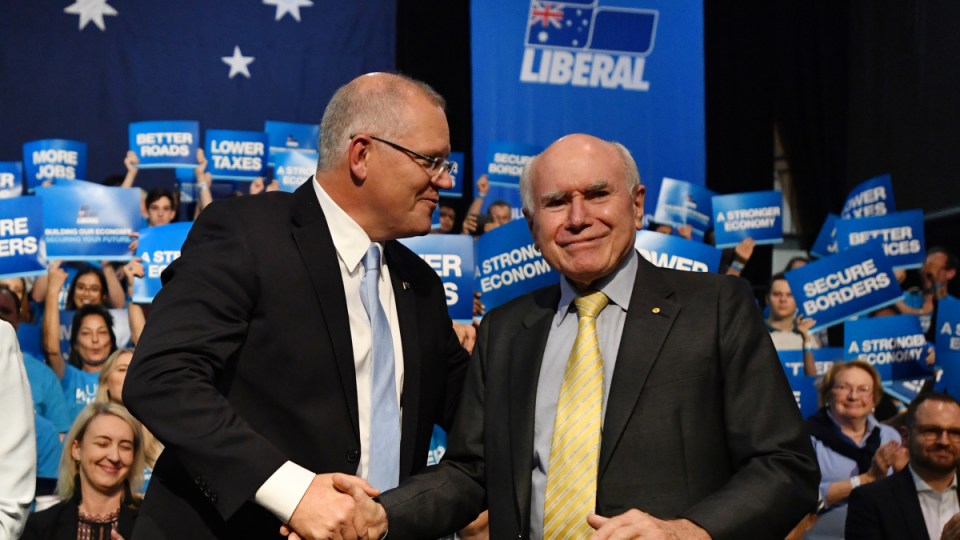 The Prime Minister will need to do more than just copy John Howard's strategy. Photo: AAP

The evidence is mounting that Scott Morrison was very tricky in last year’s coup in which he took the prime ministership, and there is a big lesson for him from one of the Liberal Party’s iconic leaders.

Like John Howard, Mr Morrison is an election winner and also like his predecessor he achieved his victory by a combination of cunning, astuteness, luck and ruthless ambition.

Indeed, so impressive was his May 18 win, an erstwhile rival for the leadership, Peter Dutton says Mr Morrison has put the Liberals in their strongest position in a decade.

In fact, it’s slightly more than a decade since the Howard era spectacularly crashed, but before then he had become Australia’s second-longest-serving PM.

That title looked like eluding Mr Howard in the term between the GST election of 1998 and the 2001 poll. So parlous was his government’s position he commissioned a special report from the party’s federal president Shane Stone.

Mr Stone’s report famously leaked – some believe Mr Howard was the source, directly or indirectly. It gave the desperate prime minister the ammunition he needed to convince his reluctant treasurer Peter Costello to let go his firm grip on the fiscal levers.

The most memorable finding of the Stone memo was that the Howard government was seen as “mean and tricky” and Mr Costello was to blame. Mr Howard won the overwhelming backing of cabinet to start splashing the cash and placating the loudest critics.

The rescue mission began working even before the cargo ship Tampa hove into view with its 400 unwelcome asylum seekers on board. That was Mr Howard’s political lucky break. He exploited it mercilessly.

Voters probably don’t mind a politician being tricky providing he or she is not doing it at their expense, although it does unmask a streak that could convince many the politician is untrustworthy.

So there is a real danger in being tricky.

Veteran journalist Nikki Savva in her inside story of the coup, Plots And Prayers, released on Tuesday, paints a picture of a cunningly duplicitous Mr Morrison: He “appears to be supporting Turnbull’s leadership”. Embracing the embattled prime minister in front of the TV cameras and advising him not to precipitate a party room vote.

But while this was happening Mr Morrison’s loyal lieutenants were busily advising Liberal colleagues “Turnbull was terminal. He was finished”. This was before the first spill vote where 10 of Mr Morrison’s supporters inflated Mr Dutton’s numbers by voting for him against the beleaguered prime minister.

Mr Morrison dismisses it as “ancient history”, but what is not ancient history is the slowing economy, stagnant wages and a struggling middle Australia.

So parlous is the situation, there is a 70 per cent probability – according to the market – that the Reserve Bank will move historically low interest rates even lower on Tuesday.

Labor is supporting the government rushing the tax cuts package into the Parliament. It is calling for it to bring forward Stage 2 of the package, giving relief for workers up to incomes of $120,000 and to shelve Stage 3.

Shadow treasurer Jim Chalmers says “if the government votes against our amendments, they will be saying that tax cuts in five years’ time are more important than tax cuts which could start this week”.

The mean part already on view is the refusal to lift the unemployed out of dire poverty by raising Newstart, robocalls victimising innocent recipients of government payments, an inquiry into retirement incomes and, arguably, the refusal to reverse weekend penalty rates cuts.