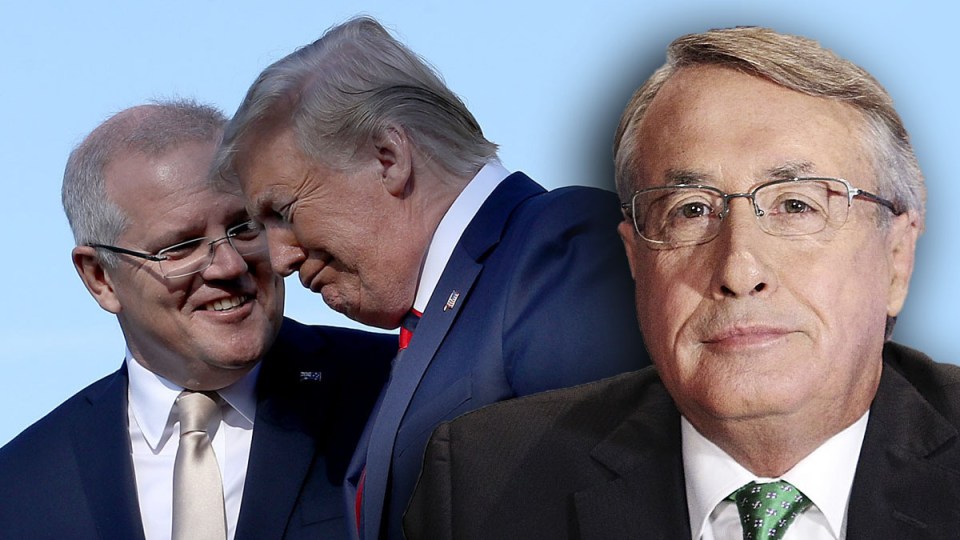 The day after Trump supporters stormed the Capitol in Washington, the Financial Times – the world’s pre-eminent financial journal – observed: “America has a national security problem in the form of the far right”.

“This closed world of misinformation, paranoia and grievance receives succour from mainstream conservatives, public office holders and cable news anchors,” it added, before concluding that the costs, “are increasingly unmistakable”.

We all watched those events at the US Capitol with a sense of horror, and yet for me at least, without a great deal of surprise.

For ever since Donald Trump descended his golden escalator, his has been a slow-motion insurrection against all the institutions of a great democracy.

Of course it was going to end like this. This is always how insurrections end. The real question is how do they start?

History tells us democracy is fragile. That it is strongest when there is respect for the rule of law, political stability and economic and social opportunity.

From the end of the second World War until the elections of Margaret Thatcher in the United Kingdom and Ronald Reagan in the United States, the gap between rich and poor narrowed in Western countries as prosperity grew.

It was the pay-off for the defeat of fascism, the 30 glorious years as the French called them.

So the biggest economic losers of the past 30 years have been Western low- and middle-income earners, and the biggest winners in advanced economies have been the Western elite – the top one per cent.

Tumbling support for democratic regimes and processes over the past 20 or 30 years has accompanied widening inequality, placing democracy under strain and – in the case of the US – leaving it vulnerable.

Twelve years ago, the collapse of the US financial system and housing market brought the Global Financial Crisis and the great recession that accompanied it.

Just as Obama struggled to right the ship, the right-wing Tea Party faction burst on the scene and eventually took control of the Republican Party.

It threw sand in the gears of American governance and set out to cripple Obama’s presidency. But their aim was deeper and broader.

Following in the footsteps of Reagan and Thatcher, they sought to destroy faith in government and the social contract.

As Obama puts it in his memoir, A Promised Land: “GOP candidates adopted a central theme: That someone else was getting something we weren’t and government couldn’t be trusted to be fair. Government was taking money, jobs, college slots and status away from hard-working, deserving people like us and handing it all to people like them. Those who didn’t share our values, who didn’t work as hard.”

This, according to Obama, led to a deep and suffocating cynicism.

Their aims were cynical – as Obama said – but their ultimate achievement was something else: Assisting Trump’s takeover of the party and delivering him the presidency.

We can think that this was unintentional on the part of the Republican leaders like Mitch McConnell. But if it was, it turned out to benefit them and their donor class hugely.

And they enabled Trump every step of the way – right up until the moment their front door was quite literally knocked off its hinges by a violent mob.

Incidentally this is what makes home-grown Trumpers like Deputy Prime Minister Michael McCormack, and LNP backbenchers George Christensen and Craig Kelly so dangerous – the only rats ever seen running on to a sinking ship.

We shouldn’t need to see the ransacking of the Capitol to remind us that inequality breeds disdain, resentment, bullying and callousness.

We know from history that when trust is lost, people can turn to authoritarian leaders.

While Trump has gone for now, Trumpism (with or without him) has not.

We are living with a political volatility of the type the world hasn’t experienced since the 1930s. A ring of fire of nativist and extremist political forces, aided and abetted by state actors like China and Russia, is destabilising our world.

We ought to be encouraged that the US democracy held and incoming US President Joe Biden was bolstered by a large popular vote.

Yet 74 million Americans voted for Trump, almost 40 per cent of those believed the election outcome was rigged, and 8 per cent believe it should be overturned.

Their loss of faith in democracy won’t dissipate quickly.

There was a sombre aspect to the Democrat result.

This is where it all started – growing inequality. And sadly COVID-19 has the potential to accelerate the process.

Just as the 2008 crash exposed growing inequalities, COVID-19 highlights the precariousness of those who don’t have a safety net in the workforce or in the health system.

But it arrived several years after US politics went “through the looking glass” of the Trump political insurrection.

The unimaginable human tragedy of hundreds of thousands of American dead is rivalled only by the horror of watching public health measures become only the latest arena for a full-blown Trump culture war.

Trump’s success has been to convince a large portion of working- and middle-class people to vote against their economic interests by pitting American against American using culture, race and identity to breed resentment.

Defeating the authoritarian politics of Trump requires the centre and centre-left to win back their traditional constituencies.

To be serious about rescuing democracy requires social democratic parties to convince working people they can restore a measure of fairness to the operation of the market economy.

Biden did a good job of this but there is a long way to go to convince working Americans that government has the competence and the compassion to restore dignity to the American workforce and credibility to its safety nets.

There are many lessons from this experience for Australia.

The Trumpification of the Liberal Party of Australia since 2013 is well documented.

Moderate “small L” Liberals have been driven from the party and there has been a contest among the contenders and pretenders over who is the more Trumpian.

As former prime minister Malcolm Turnbull has said, up until last week Scott Morrison was content to be seen as a “Trump-lite refuge” in the southern hemisphere.

While it’s arguable whether Robodebt or the handling of the China relationship is Morrison’s biggest self-inflicted disaster, the handling of both issues owes much to his tough, right-wing swagger.

It doesn’t matter whether its climate change, industrial relations, removal of the Australia Post chief or a war with the ABC, the government is always out to prove its right-wing credentials to the cable TV anchors, climate change deniers, high-profile plutocrats and conservative cultural warriors.

The Prime Minister’s refusal last week to condemn Trump for inciting violence is significant. As President-elect Biden said, a leader’s “words matter”. Our Prime Minister needs to say them.

He needs to set an example and pull his far-right backbenchers into line and distance himself and our country from extremist Sky News and right-wing commentators.

As historian Timothy Snyder observed: Post-truth is pre-fascism. “When we give up on truth, we concede power to those with the wealth and charisma to create spectacle in its place.”

For Labor it has never been more important for us to put forward a platform serious about jobs and economic recovery, the quality of our democracy and real action on climate change.

The pandemic and its fallout not only makes it easier but also more urgent for us to politically dismantle the essence of the government’s trickle-down agenda – tax cuts for the wealthy, wage suppression for the rest, and continuous undermining of social security and the wider safety net.

We could be just nine months away from an election.

It’s vital that we use our March conference to frame the choice available to Australians. It’s a choice between the Labor Party led by Anthony Albanese that understands what’s important to ordinary families and has a clear plan to get Australia back to work, and a failed Coalition government that didn’t do enough to save jobs or get Australians back to work after COVID, and wasted the recovery with too many rorts and too much time playing politics.

In light of the recent events in the US it has never been more urgent for measures that enhance and protect accountability in our democracy.

The pandemic delivered to our nation a master class in why a strong social democratic state underpins our quality of life, the strength of our economy and, indeed, the durability of our democracy.

It demonstrated clearly that the very people – the nurses, carers, supermarket workers, couriers – that Trumpism hurts the most are the people our society needs the most in a crisis.

They feel acutely the pain of rising inequality and workforce deregulation. They are our people and our fight for them is our fight for our democracy.

Yes, soon enough and not a moment too soon, Trump will be gone. But the politics and the people who abetted his rise and enabled his crimes will still be there.

As far as the US is concerned, holding them to account will be the task of a hopefully newly vigorous US democratic system.

But we need to understand the Trumpers in our midst as well.

Democracy is fragile, and the Liberal Party’s embrace of Trumpism puts Australia in danger