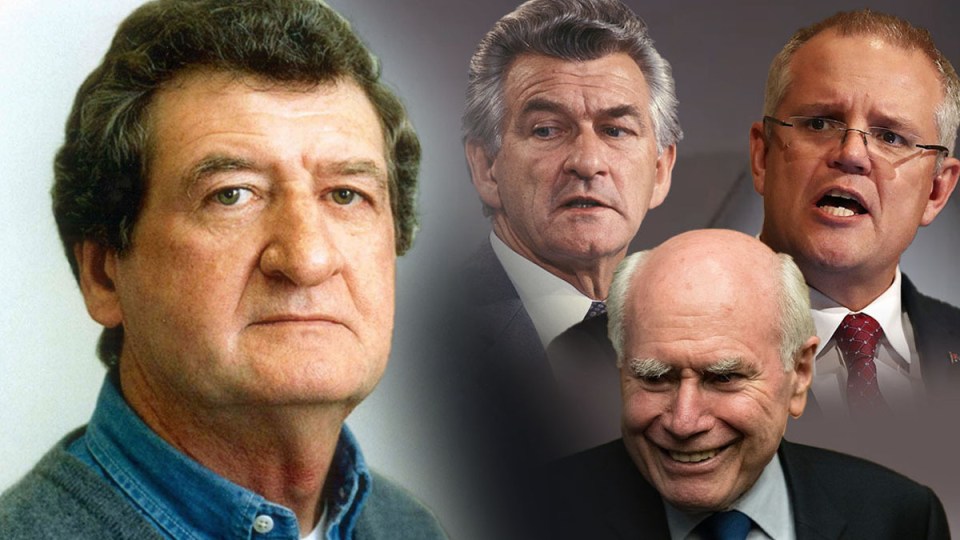 Legendary journalist Alan Ramsey loathed Bob Hawke and John Howard, and he would have put Scott Morrison in the same league.
opinion

A self-described reporter with a point of view, Alan Ramsey passed away at the beginning of this week, dying in a nursing home on the New South Wales south coast after a losing encounter with dementia that consumed him and made a miserable old age even worse.

Ramsey was one of a kind, a mould broken when after he was made and a unique exponent of the journalist’s craft for half a century, mostly in the national capital where he spent years poking the bear of political leadership.

Ramsey could spot a dud politician – especially one aiming for the top – as soon as they strutted through the arrival halls at Canberra airport.

He detested many of them, few more so than those titans of the modern era Bob Hawke and John Howard.

He hated Hawke, and not just because the former trade union supremo cut down his own favourite politician, Bill Hayden, with whom Ramsey worked as senior press secretary between 1978 and 1983.

Ramsey disliked Hawke because he saw him as a phoney with giant pretensions and what he termed a “heightened love affair with his own place in history”. Hawke was a fixer while Ramsey’s eye was always caught by maddies like Paul Keating and Mark Latham.

The loathing for Howard was deployed for every reason possible. Ramsey didn’t like the man’s works, his personality and especially his politics. For all of Howard’s 11 years as prime minister, the columnist stalked him relentlessly and savagely.

When Howard’s end loomed large in 2007 – with his use-by date hurried along by a nicely timed and confected assault by Labor’s Kevin Rudd – there were reports the great survivor might prevail one more time.

“Remember that heading in the Herald a few weeks back, after one of the opinion polls bumped up the government’s lousy standing a point or two?” asked Ramsey. “Lazarus stirs, it said optimistically of John Howard. Wrong. It was just the flies moving.”

He would quote Hansard, speeches and media interviews at length. Other journalists mocked his strategy, usually too lazy to put in the hours the columnist clocked during his meticulous research.

As news of his death bounced around media ranks, a question sprang to mind.

What would Ramsey have made of the curious government and prime minister with which we are saddled?

He would most certainly have put Scott Morrison in the Hawke and Howard league – seeing him as a charlatan in love with his own political persona, pretending to be a pragmatic problem solver while masking a “capital L” Liberal tribalism with a constantly photographed and Tweeted daggy dad costume.

Here’s five current and enduring scandals and outrages that would have filled Ramsey’s pen with poison and spiteful prose:

Top of the list would be former Senate leader and Finance Minister, the ideologically conservative Mathias Cormann, and his publicly funded pursuit of a 232,626 euro-a-year job as top dog at the Organisation for Economic Cooperation and Development’s plush Paris offices while resting in the Eiffel Tower-adjacent official residence.

Cormann is flying around the world – touching down in Turkey, Denmark, Germany, Switzerland, Slovenia, Luxembourg, Belgium, Spain, Portugal, Austria, the Slovak Republic, Hungary, France, Chile, and Colombia. Cormann didn’t need to book with his favourite Liberal-donor run travel agent HelloWorld because he’s flying on a government VIP jet and has eight and a half full time staff courtesy of the Foreign Affairs Department, including a communications specialist.

Next is robodebt, the most expensive public policy failure in Australia’s history, a debt-recovery scheme plugged into an uncaring algorithm that hoovered up millions from people who were unaware of the money involved, had zero ability to pay or were in no way liable to pony up any cash.

The scandal ended in the government’s mind with a $1.2 billion settlement announced moments before Australia’s biggest-ever class action was due to start in the Federal Court. The scheme kicked off in the Social Services Department in 2015 – when Scott Morrison was minister.

Third would be the still unfolding horror story in which 25 current or former Australian Defence Force personnel have been fingered for alleged involvement in serious crimes, including the unlawful killing of 39 Afghan civilians.

The alleged crimes and brutal behaviour were horrific, but the crab-walk away from any ministerial responsibility for, or accounting of,  what’s been Australia’s longest war at the side of US-led forces in the landlocked Central/Southern Asia nation would have drawn Ramsey’s pen. His old foe Howard would have not been spared.

The travails and misdeeds of ambitious and pompous minister Angus Taylor, who attracts controversy as easily as Chinese wet markets gather superbugs, would have enthralled and enraged Ramsey.

Taylor’s Inspector Clouseau class fit-up of Sydney Lord Mayor Clover Moore for a carbon emissions spewing travel bill that was too big to be true – because it wasn’t – would have had Ramsey in a rage and the mass of public record detail would have turned 1000 words into a stylistic crescendo worthy of James Boswell.

Finally, Ramsey would have enthusiastically chronicled the times of Morrison – the shape shifting, the firehose of announcements which often fail on the follow-through front, the black-is-white ability to deny reality, the stubborn refusal to publicly admit failure or wrongdoing, and the marketer’s obsession with image and filling the media void.

Morrison is, in every way, the kind of politician made for the caustic journalist’s eye and ear possessed by Ramsey.

The saddest part is that the lack of someone in Canberra like Ramsey just helps Morrison get away with so much of what he merrily ventures, day in and day out.

With Morrison in The Lodge, Ramsey was missed before he was gone.

Dennis Atkins: The death of a Canberra press legend who would have torn strips off Morrison