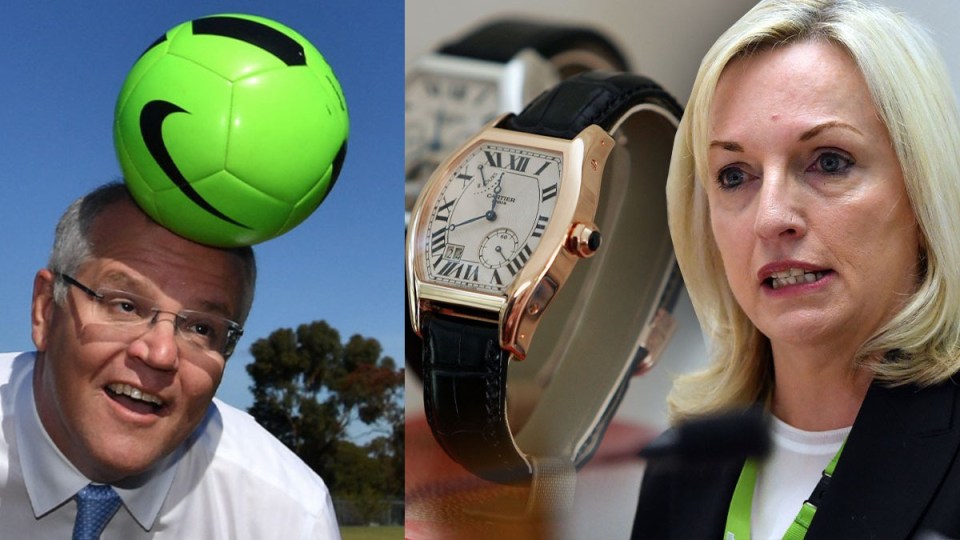 Scott Morrison has taken Christine Holgate to task over Cartier watches. But what about #sportsrorts?
analysis

Australia Post boss Christine Holgate drew the ire of Prime Minister Scott Morrison this week over revelations that the publicly-owned firm had splurged thousands on lavish gifts for senior executives in the form of luxury watches.

But Mr Morrison’s display of outrage over the Cartier cash splash appears to be at odds with his stance on other instances of questionable spending that have occured on his watch.

“I was appalled, and it is disgraceful and not on,” Mr Morrison said of the Cartier timepieces, which Ms Holgate claimed were given as an “award” to four senior executives who had secured a lucrative deal with the nation’s big banks.

“She can go”, the PM said bluntly on Thursday, when asked what would happen if Ms Holgate refused to stand down while an inquiry into the watches affair takes place.

The inquiry was ordered “within an hour” of the revelations “so appalled and shocked was I by that behaviour, because as any shareholder would in a company raise their outrage if they had seen that conduct, by a chief executive, the management or the board, they would insist rightly on the same thing,” Mr Morrison said.

But the Cartier watches controversy is far from the first spending scandal the government has faced.

The latest, revealed on Friday, involves more than $118,000 doled out to the government-appointed chair of Australia’s corporate watchdog to cover his tax costs, and a $70,000 fee paid to the deputy chair for relocating from Melbourne to Sydney.

Mr Morrison’s public reaction to the news, which saw ASIC boss James Shipton stand down while an inquiry occurs, was notably more subdued than his response to the Australia Post revelations, despite the affair costing taxpayers around 10 times as much.

When asked at a press conference whether the ASIC expenses scandal showed it was time for “a full investigation” on the remuneration and bonus arrangements for government appointees Mr Morrison said he would “wait and see” what the inquiry recommended.

Then there’s the $30 million paid to a Liberal party donor for the piece of farmland known as the Leppington Triangle, which was valued at just $3.065 million a year later.

Far from reacting with disgust, the Morrison government initially attempted to sell the deal, which occured under the watch of then-urban infrastructure minister and current Communications Minister Paul Fletcher, as “a bargain” for taxpayers.

“When there is needing to be more runways and more infrastructure built at Western Sydney Airport, they’ll look back and they’ll say, probably, what a bargain that was,” Deputy Prime Minister Michael McCormack said.

“The $30 million, yes it’s a lot of money but in time it will be a very good investment.”

On top of that, there’s still the matter of ‘sports rorts’, the pork barrelling scandal that saw $100 million worth of taxpayers’ money go to sports clubs in Coalition and ‘marginal’ electorates in the lead-up to last year’s election, with the grants decided according to politically colour-coded spreadsheets exchanged between then-sports minister Bridget McKenzie’s and Scott Morrison’s offices.

Out of touch, out of time? True cost of watches revealed

Ms Holgate initially pegged the value of the four Cartier watches around $12,000 when quizzed during Senate estimates on Thursday, but a frantic late-Friday media release by Australia Post revised that figure upwards by nearly two-thirds.

“Australia Post will continue to participate transparently in Budget Estimates 2020-21 processes, including to review the proof Hansard transcript of evidence when it is made available and to respond to questions on notice, and will – as reflected in my public statement yesterday – also fully co-operate with the recently announced investigation to be conducted by shareholder departments.”

Ms Holgate defended the decision to buy the timepieces, claiming the watches were not paid for by taxpayers as “we [Australia Post] do not receive government funding”.

“I have not used taxpayers’ money, we are a commercial organisation,” she said.

The British expat resigned as the chief executive of Blackmores in 2017 to take the reins of Australia Post from controversial boss Ahmed Fahour, who walked away with a parting pay packet of more than $10 million.

The Cartier watches saga has shed light on broader issues within the 211-year-old national institution.

The watches are “a canary in the coal mine … a warning sign that there’s worse things going on”, Deakin university marketing expert Michael Callaghan told The New Daily.

“I have been less than impressed with Christine Holgate’s performance throughout the pandemic and beforehand,” Dr Callaghan said.

“Her comments [to the Senate] display the fact that she has a massive blind spot as to what the purpose of her role in her organisation is.

A survey by the Victorian branch of the posties’ union this week revealed that posties are stressed out and struggling under the weight of pandemic demand.

Delivery delays have been exacerbated by Australia Post’s controversial Alternating Delivery Model (ADM), which the Morrison government signed off on in April, the union has claimed.

More than 93 per cent of the nearly 400 Victorian posties surveyed by the union said the ADM had “degraded” the quality of service Australia Post offers.

Not on my watch? Morrison’s tough talk on Australia Post at odds with government’s record