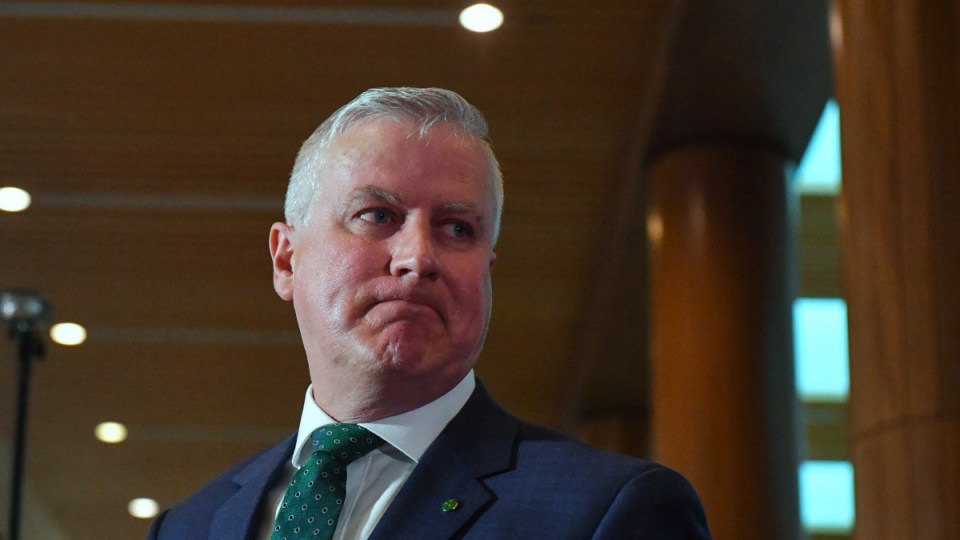 Deputy Prime Minister Michael McCormack has declined to say whether he has confidence in his own infrastructure department, after the “disappointing” Leppington Triangle deal where bureaucrats paid a vastly inflated amount for land which won’t be needed for decades.

A scathing auditor-general report claimed infrastructure officials’ conduct “fell short of ethical standards” and was “not appropriate” in relation to the land for the under-construction Western Sydney airport, with taxpayers shelling out almost $30 million for land valued at $3.065 million less than a year later.

The Leppington Triangle land was purchased in 2018, in anticipation of a second runway at the airport, but it won’t be needed until 2050.

Mr McCormack, who is also Infrastructure Minister, said on Monday the deal was a “bargain”. On Tuesday, Prime Minister Scott Morrison delivered a diplomatic rebuke to the Nationals’ leader, saying he was “disappointed” with the chain of events.

On Wednesday, Mr McCormack said he felt the same as the PM about the purchase.

“I too was disappointed that the Leppington Triangle was well over the odds of what it should have been,” he said in Canberra.

“There’s an inquiry and a review going into that at the moment, by an independent arbiter to make sure that that sort of thing does not happen again.”

But asked by The New Daily on Wednesday if he backed his own infrastructure department – considering the auditor-general’s scathing assessment that officials had given “inadequate and unreliable” advice – the deputy PM did not directly answer.

When asked again by TND whether he was satisfied that the issues identified by the auditor-general had been addressed, Mr McCormack ended the press conference.

TND has put questions to the infrastructure department about the independent report being undertaken, including whether the final report would be made public.

A department spokesperson did not respond to those questions, instead saying “The Department does not wish to pre-empt these processes and will make further detail available at an appropriate time.”

“The Department is also undertaking an independent review of the transaction, by an independent auditor, to ensure any further problems in departmental processes are identified and addressed.”

Labor’s shadow infrastructure minister, Catherine King, said the ministers linked to the Leppington purchase “must stop running away from questions.”

“It is not good enough to say that the department is holding another inquiry into itself. There needs to be a transparent and fully independent inquiry into what happened and why,” she told TND.

“The Morrison Government likes to talk up their infrastructure investment, but after this it is hard to take anything they say seriously.”

Earlier, Mr McCormack was asked about another report from the Australian National Audit Office, where the auditor-general had warned that “budget constraints” could mean the office conducted fewer audits.

The ANAO, in addition to uncovering the Leppington Triangle purchase, also sounded the alarm on the ‘sports rorts’ saga.

“Without supplementary appropriations, the number of performance audits tabled in the Parliament will continue to reduce,” auditor-general Grant Hehir said in the ANAO’s annual report, saying he had written to Mr Morrison to ask for “more sustainable” funding.

Mr McCormack was asked about funding for the office.

“I don’t believe there will be fewer audits, and those sorts of audits should be held,” he said.

“We don’t want lesser audits, we just want everybody to do the right thing, and certainly I know that will be what happens.”

The deputy PM had called his press conference to speak about the government’s budget plans to encourage people to take up agriculture jobs in regional Australia. Due to border closures and a downturn in foreign backpackers taking gap years, Australian fruit and vegetable producers say they have fewer staff to help pick at harvest time.

In a speech to the Regional Australia Institute on Wednesday, Mr McCormack extolled the benefits of moving regional, including the opportunity for social media photos.

Michael McCormack is apparently dead serious about getting people out into regional Australia to pick fruit for the 'gram…here's our exchange from earlier. @canberratimes pic.twitter.com/jDsrjD7UvK

“If you know somebody who might be on the coast who might be lounging around with a surfboard, tell them to come to the regions,” he he said.

“Bring their mobile with them because it would be a great Instagram moment for them to get up the tree to pick some fruit.”

The government has already announced allowing job seekers to earn $300 a fortnight without affecting their welfare payments.

Backpackers working on farms can stay with one employer for more than six months and stay in Australia an extra year.

Programs aimed at bringing in Pacific and Timorese workers to fill rural and regional job shortages have reopened.

But there are warnings more need to be done, including from a bipartisan parliamentary committee that wants student loan discounts.

The committee has also called for dole recipients to be able to keep more of their payments while doing low-paid farm work.

Even before coronavirus, labour shortages have been a key issue in agriculture, with the coalition yet to heed calls for a dedicated farm worker visa.

Tough working conditions and low pay have historically been seen as a barrier to Australians filling the jobs.

There have been shocking cases of exploitation across horticulture.

He believes millennials who may have intended to holiday in Europe or Bali will spend money in the regions.

“They’re going to the big whatever – and there are lots and lots of big things out in regional Australia for them to go and get photographed in front of.”