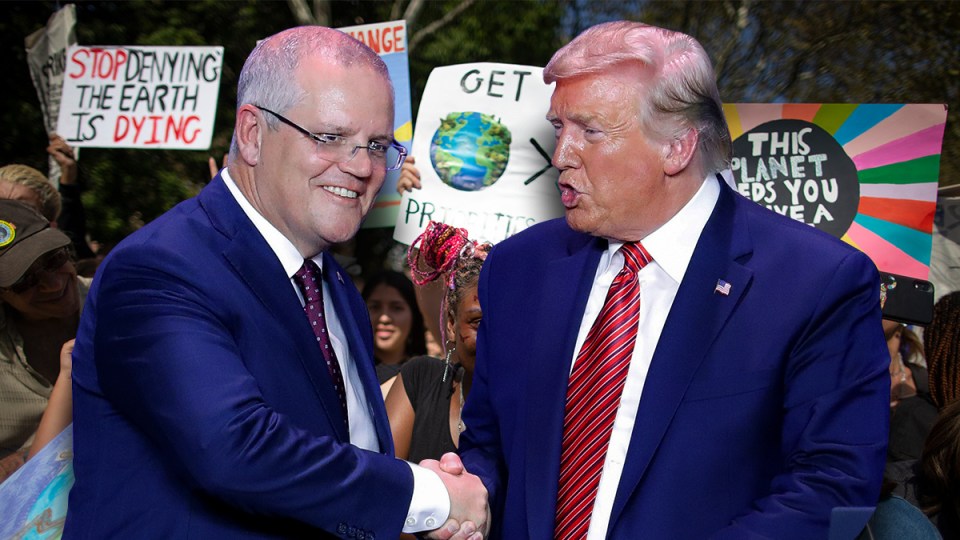 Prime Minister Scott Morrison insists that all is cool with Australia’s response to global warming – an attitude that has seen him roasted on the world stage.

This was the week that his ever-ready smile all but evaporated amidst climate strikes, Greta Thunberg’s red-hot takedown at the United Nations, and the natural world’s godfather, Sir David Attenborough, putting Mr Morrison in the naughty corner for making with the lump-o-coal jokes.

Hundreds of thousands of students, parents and workers across Australia attended a mass climate strike on September 20 to demand urgent action on global warming.

In more than 100 cities and regional locations around the country, crowds of protestors could be seen waving signs and chanting for the Australian government and businesses to commit to 100 per cent renewable energy generation and exports by 2030.

Organisers estimate about 300,000 Australians attended the worldwide #Climate Strike, but more conservative estimates had the number closer to 180,000.

Unlike previous student-led climate protests, this strike had the support of more than 2000 companies that gave their employees permission to take the day off to join in.

The strike moved across 120 countries and was the latest day of global action led by Swedish teen climate activist Greta Thunberg.

It was deliberately scheduled to start three days before Greta appeared at the United Nations climate summit in New York.

Greta slammed global leaders for their inaction on climate change in her speech at the UN climate summit.

She warned attendees that younger generations “will be watching” them and called out governments for their sluggish adoption of climate policies and focus on economic, rather than environmental, concerns.

“People are suffering, people are dying, entire ecosystems are collapsing,” she said.

“We are in the beginning of a mass extinction and all you can talk about is money and fairytales of eternal economic growth. How dare you?”

US President Donald Trump appeared to have mocked Greta after her impassioned speech.

In a tweet late on Monday (local time), the US President said of Ms Thunberg, “She seems like a very happy young girl looking forward to a bright and wonderful future. So nice to see!”

The president was not scheduled to appear at the summit – invites were extended only to global leaders who had promised ambitious carbon emissions reduction targets.

Mr Trump dropped in for a few minutes before leaving to host a side event on religious freedom.

“I think there’s a lot of disinformation out there about, frankly, what Australia is doing,” Mr Morrison said.

“I want children growing up in Australia to feel positive about their future.

“I think it’s important that we give them that confidence that they will not only have a wonderful country and pristine environment to live in but they’ll also have an economy they can live in as well.”

Where was Scott Morrison?

While global leaders flew from all over the world to attend the summit, Mr Morrison was at a Trump rally in the US swing state of Ohio.

Mr Morrison was not invited to speak in New York, nor did he want to attend anyway.

The rally Mr Morrison attended instead was scheduled around the opening of Australian cardboard box billionaire Anthony Pratt’s new recycling factory in the regional town of Wapakoneta.

He also gave a speech about foreign policy and visited an innovation hub in Chicago, where he learnt about McDonald’s new “smart Drive-Thru technology”.

After the climate action summit was over, Mr Morrison went to New York where he boasted about Australia’s climate policies in a speech to the UN General Assembly.

“Australia is doing our bit on climate change and we reject any suggestion to the contrary,” he told the assembly.

Sir David Attenborough singled out Mr Morrison for his lack of action on climate change in an interview with Triple J’s Hack program.

The popular British broadcaster said while previous Australian governments had been “saying all the right things” about tackling climate change, that direction had gone downhill with the election of Mr Morrison.

The 93-year-old conservationist criticised Mr Morrison for bringing a lump of coal into Parliament when he was Treasurer in 2017.

“I don’t think it was a joke,” Sir David said of the stunt.

“If you weren’t opening a coal mine, OK, I would agree; it’s a joke.

“But you are opening a coal mine.”

The Climate Council labelled his speech to the UN General Assembly as “colossal bullsh-t”.

“Mr Morrison told the United Nations that our children have a right to optimism,” council CEO Amanda McKenzie said.

“Perhaps they would feel more optimistic if he started to take the problem of climate change seriously.”

The package includes $33 million to restart the mothballed Drought Community Support Initiative, which will give up to $3000 to eligible households.

A further 13 councils across Queensland, New South Wales, Victoria and South Australia will get $1 million each for local projects.

There is also up to $51.5 million to overhaul the Farm Household Allowance, a payment with a similar rate to Newstart for producers doing it tough.

The eligibility criteria will be extended and simplified, with the government estimating less than 7000 of the 24,000 eligible households are currently accessing the payment.