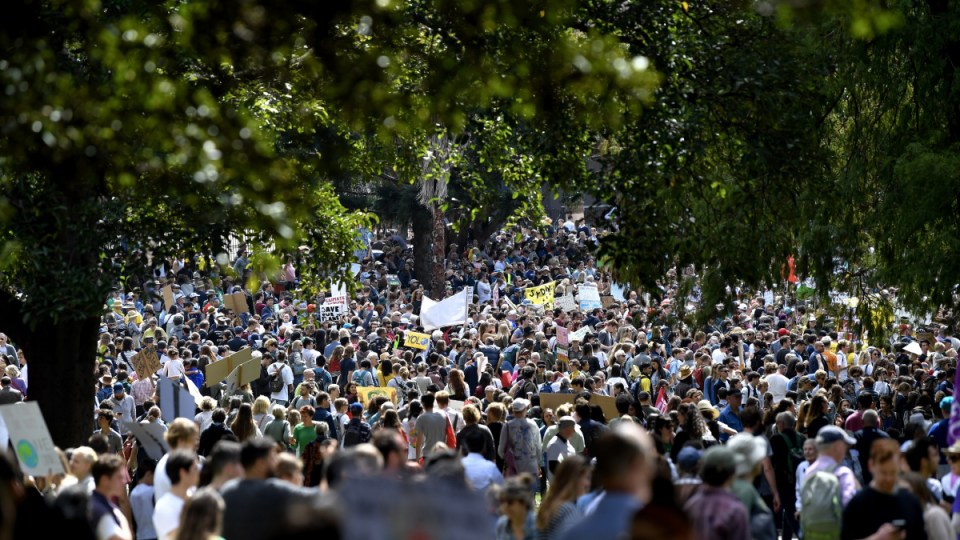 Climate protesters gathered in their thousands in Sydney for Friday's protest. Photo: AAP

Thousands of students, parents and workers across Australia have come together to take part in the latest mass climate strike to demand urgent action on global warming.

At least 2000 businesses gave their employees permission to take Friday off to join in 110 city and regional locations, as protesters marched CBD streets and gathered in major parklands, holding signs including “Stop Adani”, “Stop drilling in the Bight” and one group of students even waving flags of several South Pacific island nations.

Organisers of the Global Strike 4 Climate rallies are demanding government and business commit to a target of net zero carbon emissions by 2030.

With Scott Morrison in Washington for a week-long state visit, acting prime minister Michael McCormack slammed the protests as a “disruption” to schools and businesses, arguing students would learn more at school than at a rally.

“I think it is just a disruption,” he said, as NSW Police confirmed at least 50,000 people were gathered at The Domain in Sydney.

Secretary of the Council of Australian Trade Unions, Sally McManus, was in Brisbane on Friday for the so-called #ClimateStrike, describing the protest march as “huge”.

Organisers claim the biggest crowds in Australia were seen in Melbourne, where they estimated 150,000 people attended the rally.

The strikes coincided with the last day of the Victorian public school term.

It’s impossible to see where the crowd of #ClimateStrike protestors ends and begins in Melbourne. Looks like at least 80,000 here @TheNewDailyAu pic.twitter.com/K9hhK71v13

NSW Police confirmed at least 50,000 people took to the streets of Sydney to call for action.

Great overhead view of some (!) of the Sydney #ClimateStrike. When it’s too big for a photo, you know it’s epic. 💚🌱 https://t.co/yubKcB31bV

In Albury, protestors targeted Federal Environment Minister Sussan Ley by staging a “die in” outside her electorate office.

PHOTO: Students protest with a lie down out the front of @sussanley office in #albury 📷 @bordermail #ClimateStrike pic.twitter.com/ychPdxHNAH

In Cairns, 1500 people are estimated to have turned out in a town of 150,000 people where anger about the Adani coal mine is a hot topic.

Huge turn out in Cairns! If you breathe air, you should care.#ClimateStrike #schoolstrike4climate #FridaysForFuture #StopAdani pic.twitter.com/CuNGREXMOv

Thousands of protestors gathered in Perth and Adelaide too.

This is the by far the biggest turnout for the climate that Perth has ever seen! #wapol #ClimateStrike pic.twitter.com/QVvTz8HK50

These wise women said they’d been protesting for 40 years. Time has run out because of government & corporate inaction. Today thousands of young, old & every age in between said enough is enough! #ActNow #GlobalClimateStrike #schoolstrike4climate #Adelaide @ExtinctionR pic.twitter.com/lZ0pM2xnd5

Friday’s strike is the latest day of global action led by Swedish activist Greta Thunberg, who called on Australia, the Philippines, Japan and the Pacific islands to kick off the worldwide protests before the strikes move across 120 countries over the weekend.

The strike was deliberately scheduled to start three days before the United Nations climate summit in New York, where Thunberg is protesting the White House’s inaction on climate change.

She tweeted: “Australia is setting the standard!”

Incredible pictures as Australia’s gathering for the #climatestrike
This is the huge crowd building up in Sydney.
Australia is setting the standard!
Its bedtime in New York…so please share as many pictures as you can as the strikes move across Asia to Europe and Africa! pic.twitter.com/7eAPUQPq5C

It follows earlier strikes in March attended by 150,000 people in Australia and 1.5 million people worldwide.

Organisers estimated Friday’s strikes would be even bigger this time thanks to extra support from unions, workers and companies that have signed up to strike with the young activists.

Some creative costumes and signs spotted at the #ClimateStrike in Melbourne. This time it’s not just students and teachers protesting. Families, grandparents, baby boomers and corporate workers are here supporting each other @TheNewDailyAu pic.twitter.com/xSCVteNRNL

Twenty companies, including Atlassian, Future Super, KeepCup and clean energy retailer Amber, are part of an alliance called Not Business As Usual that is demanding companies to support staff to attend the strikes.

More than 2700 companies have joined the alliance.

Medical groups such as Doctors for the Environment Australia (DEA) have also thrown their support behind the protests.

“As doctors who are on the front-line of care, we can see the impacts of climate change are having very real consequences on people’s lives,” DEA Honorary Secretary Dr Richard Yin said in a statement on Friday.

“If our politicians fail to listen to the science, they are undermining the future environmental conditions that support the health and wellbeing of today’s young people.”

Rock singer Jimmy Barnes has backed the student-led protests, recording a video while on tour in Mackay to be played for local students at the protest.

“I am a father and a grandfather and want my grandchildren and the younger generation to live in a safe world, free from the dangerous effects of man-made climate change,” Mr Barnes said.