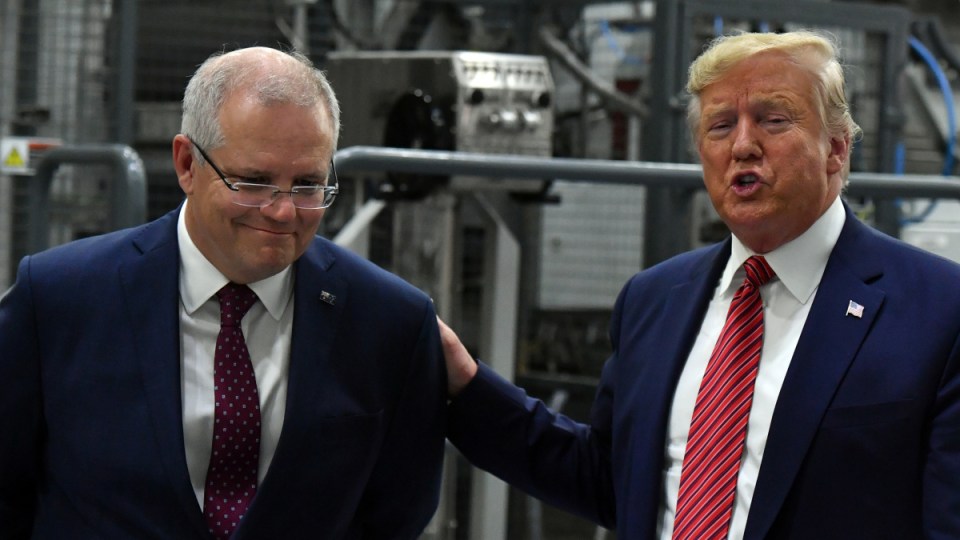 Prime Minister Scott Morrison has enthusiastically shared the stage at a Trump rally in the US swing state of Ohio rather than attend the United Nations Climate Action Summit in New York.

The rally was organised around the opening of Australian cardboard box billionaire Anthony Pratt’s new recycling factory in the regional town of Wapakoneta.

Its timing is probably no coincidence either, as President Donald Trump, like the Prime Minister, was not invited to speak in New York and didn’t want to go anyway.

The Special Representative of the UN Secretary-General Antonio Guterres, Rachel Kyte, said: “He (Mr Guterres) wanted people to come with plans, not speeches.”

Those plans had to be about doing more to reduce emissions and combat climate change than had already been promised.

Mr Guterres, backed by the latest scientific assessments, is concerned by the fact that what nations promised at the Paris Climate Summit four years ago will fall disastrously short of what is needed to avert a catastrophic rise in global temperatures by 2050.

Simply put, if a nation had nothing new to say, it was not welcome to make it to the podium.

Our Foreign Minister Marise Payne is reduced to bystander status.

At the Ohio Rally, Trump told 1500 cheering supporters that Scott Morrison was supposed to lose the last election, but “he blew ’em away”. And added that the PM did that because “he believes the same things I believe”.

Incredibly, given the fact that some 300,000 people rallied for climate change action around Australia – and millions more did the same around the world – climate change wasn’t mentioned during the leaders’ Oval Office love in.

“No it didn’t come up” was Morrison’s terse reply to reporters.

Even though since achieving the top job, Mr Morrison has said he believes the climate science and is “taking action”, that is not how he is perceived by the American media.

CBS Radio commentator Michael Williams, in a live cross from Washington to The Sunday Project, said the two men get on because they both like “free trade and closed borders”.

And more to the point, “both are big on climate scepticism”.

Williams, like other foreign commentators, hasn’t caught up with the Prime Minister’s rhetorical pivot.

Or maybe, like the UN Secretary-General, is judging him on his government’s weak commitments. Though Energy Minister Angus Taylor insists “we are taking strong action and we need to”.

Mr Taylor says Australia is overachieving in reaching the commitments we have made. Never mind that a special exemption was given to Australia at Kyoto to keep emitting on the promise to do better later.

Our emissions, on the government’s own figures, are continuing to rise.

Mr Taylor, like his Prime Minister, has no plans on how to achieve our net zero emissions target by 2050 other than yet-to-be invented technology.

It’s becoming the MO of this government – as they say in police speak of the modus operandi or the usual way suspects commit their crimes – to claim success while failing to really deliver.

Another worrying example is its failure to deliver its commitment to the international world-standard minimum of 90 days of fuel reserves.

Now in its seventh year, the best the government has done is two to three weeks of fuel reserves.

The attack last week on the Saudi oil refinery complex and the disruption this caused could be just a foretaste of the dangers ahead.

Mr Taylor claims we are close to 90 days because he is including “stocks on water”.

Not even his colleague, Resources Minister Matt Canavan, believes that.

He told Sky TV on the weekend “we’ve got roughly on average about 40 days” of reserves.

Nero famously fiddled while Rome burned. Pity he seems to be a role model for our leaders in Canberra.