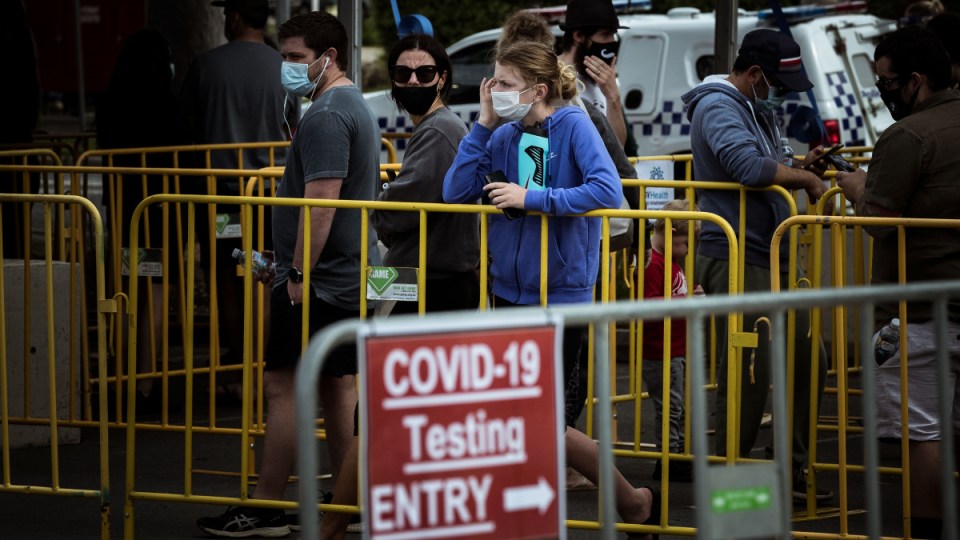 Premier Daniel Andrews says Victoria will be closer to “COVID normal” than it has been for months when he reveals on Sunday what restrictions will be eased as part of the roadmap to reopening.

Victoria had six new cases of coronavirus and zero deaths on Thursday, while the number of “mystery cases” rose by one to 15.

All of those new cases were in metropolitan Melbourne, bringing the city’s rolling 14-day average of daily cases down to 8.9.

In regional Victoria, the 14-day average stands at 0.6.

The Premier has again defended maintaining tougher restrictions in Victoria than are in place in NSW, which has recorded a similar number of new cases in recent days.

Federal Health Minister Greg Hunt said on Wednesday that Victoria no longer qualified as a coronavirus hotspot, and restrictions in Melbourne should be eased.

“It’s just a fact that NSW has not had 4278 mystery cases across the pandemic as it’s unfolded,” Mr Andrews retorted.

“They’ve not had the virus get into some of the settings that have been typical of this second wave.

“What I would say is, on Sunday we’re going to be able to take some steps, we’ll be closer to the NSW position than we have been for months.”

The Premier confirmed he asked the Prime Minister to provide more Australian Defence Force personnel to help enforce the “ring of steel” around Melbourne.

“I got a good hearing and I’d be very confident that if there is additional support available then we’ll almost certainly get that,” he said.

“Today’s situation is about as encouraging as it gets at this point in time,” he said on Thursday.

Mr Andrews also said there might be more asymptomatic testing of people in Melbourne as new cases continued to fall.

Police are investigating a vandalism attack on the Premier’s electorate office at Noble Park, in Melbourne’s south-east, overnight.

Bricks were thrown at the windows of the office, and slogans calling for Mr Andrews to be sacked were spray-painted on the walls of the building.

People lined up from the early on Thursday morning to get tested in Shepparton, in Victoria’s north, after three cases of COVID-19 were identified there earlier in the week.

There were long queues at testing centres on Wednesday, and many people were turned away after waiting for hours in hot, sunny conditions.

More than 1800 tests were carried out in Shepparton and other nearby centres on Wednesday, and another 2000 are expected to be completed on Thursday at 11 sites in the region.

On Wednesday afternoon, Greater Shepparton Council advised people not to attend the pop-up clinic at the showgrounds, which had already reached capacity for the day.

Jeroen Weimar, the commander of coronavirus testing at the Department of Health and Human Services, apologised to those who were turned away, and promised there would be greater capacity for testing on Thursday.

“Please bear with us, and get tested today,” he said on Thursday.

A number of businesses are closed, after being visited by customers who tested positive after catching the virus from a truck driver who stopped in the town.

The owner of Lemon Tree Cafe, Leanne Stride, said her business was being cleaned and staff members had been tested for the virus.

“It’s just so devastating. I have mixed emotions, I am angry, I am sad for the town,” she said.

“So far 80 per cent of my staff have come back negative. We are still waiting for the rest but that is a positive, in a sense.”

Use of police in quarantine hotel ‘ill-advised’, expert says

Fresh concerns have been raised about police officers overseeing security at a Melbourne quarantine hotel, while also performing operational duties in the wider community.

Police maintain a 24-hour presence at the Novotel South Wharf, one of the revamped quarantine scheme’s ‘hot hotels’ where people can isolate if they cannot safely do so at home.

Victoria Police said contact between officers and hotel guests was minimal, and the risk of exposure was no different to when officers worked in the community.

“Hotels are not built like wards in hospitals. Police are very good at other jobs, but are no experts in infection prevention,” she said.