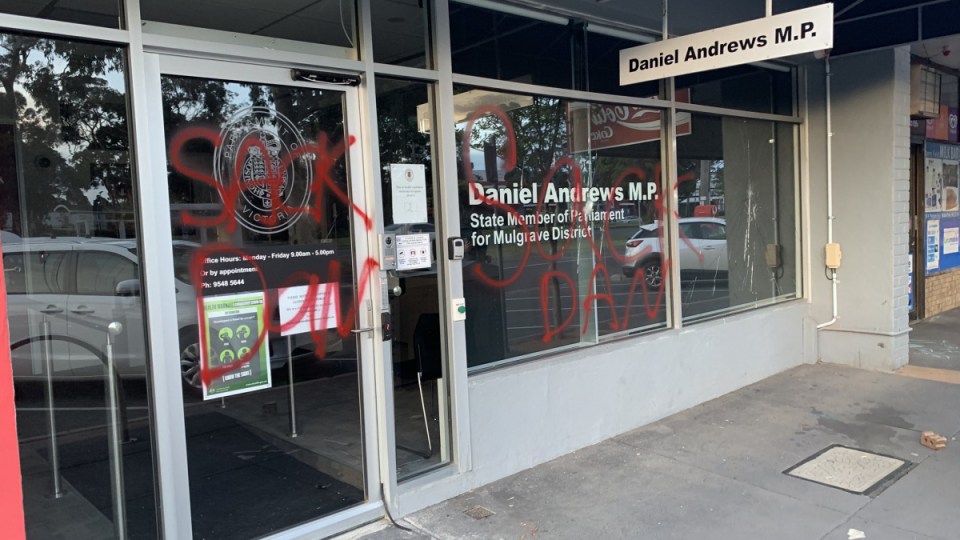 Victorian Premier Daniel Andrews’ office has been vandalised and spray-painted with slogans calling for him to be sacked.

It’s the second time in less than a month that his office has been targeted.

Victoria Police have cordoned off the suburban Noble Park office after the incident on Wednesday night.

“Sack Dan” was spray-painted across the front of the office.

A brick appears to have been thrown at a window, cracking it.

Police are calling it a criminal damage incident.

“Investigators were told an office building on Princes Highway was graffitied and damaged by an unidentified person,” they said in a statement.

“Political attacks have no place in the state. That’s not the way we do things here in Victoria, and I condemn it unequivocally. There is no place for this,” he told reporters on Thursday.

“I have no doubt that the premier’s staff will be feeling nervous and concerned today after that attack. So my sympathies are with them.”

Mr O’Brien also denied the Opposition’s ongoing criticism of how the state government is handling the coronavirus crisis had incited the attack.

“The idea that anything that an MP says leads to that sort of outcome is just nonsense,” he said.

There is growing frustration in Melbourne over the continuation of tough coronavirus restrictions in the city.

While the Premier has said some of those measures will be eased on Monday, it won’t be as many as first hoped.

Mr Andrews is also under pressure over a hotel quarantine program believed to have sparked a second wave of infections, leading to the deaths of hundreds of Victorians and the enforcement of restrictions in the regions and metropolitan Melbourne.

Late last month, slogans including “tyrant” were spray painted on the windows of Mr Andrews’ office.