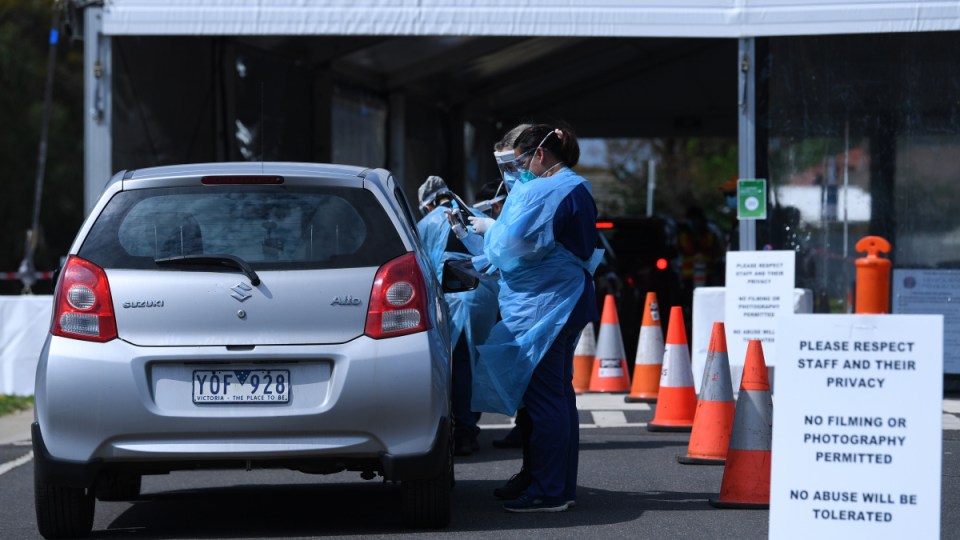 Testing sites in Shepparton have been overwhelmed since news of the outbreak broke. Photo: AAP

Victoria appears to be back on track in its fight against the coronavirus, despite this week’s outbreak in a regional city.

The state had just six new virus cases on Thursday, its second day with fewer than 10 after a worrying week of double-digit increases.

Melbourne’s benchmark 14-day average has fallen to 8.9, the lowest level in months. But it will be unable to get to as low as five, the target originally set to wind back some virus rules, by Sunday.

In a concerning development, the city has had 15 mystery infections in the past fortnight, up one from Wednesday. The target for those is also five.

In country areas, the 14-day average remains unchanged, at 0.6.

Victorian Premier Daniel Andrews will give more details at a briefing later on Thursday. But the regional Victorian figure suggests there are not yet more confirmed infections in Shepparton, where a new COVID cluster emerged late on Tuesday.

Shepparton residents queued before dawn on Thursday after many were turned away from testing centres in the town on Wednesday after a callout for all to get tested.

The COVID-19 outbreak in the town, which is 160 kilometres north of Melbourne, was sparked by a city truck driver who failed to tell contact tracers he had been there.

The man, who was infected as part of the Chadstone Shopping Centre outbreak, visited both Kilmore and Shepparton while infectious on September 30.

He had a worker’s permit allowing him to leave the city. But he also admitted to illegally dining at a Kilmore cafe, where a staff member caught the virus, and told contact tracers he had stopped in Shepparton only after three people in the town tested positive on Tuesday.

On Wednesday, Mr Andrews said the state Department of Health and Human Services compliance unit was examining the matter and might make a referral to police.

He said more infections were “almost certainly” expected and urged everyone in Shepparton to get tested for the virus. The community answered the call.

Hundreds lined up at the Goulburn Valley Health site on Wednesday, with reports some people were being told by police to go home or face a six-hour wait.

A fourth testing site, a drive-through at Shepparton Sports Precinct, will open from 10am on Thursday. Operating hours have been extended until 8pm for the Shepparton Respiratory Clinic.

Nine Australian Defence Force members will also be on the ground on Thursday, along with Ballarat’s rapid response team.

The three people who tested positive in the town worked at Central Tyre Service on Welsford Street between September 30 and Tuesday.

Another five spots are also considered high-risk sites, with a further four listed as locations of concern.

Chief health officer Brett Sutton had “no doubt” the Shepparton community would get on top of the outbreak but local MP Suzanna Sheed said the town was behind the eight ball.

Elsewhere, a staff member who worked a night shift on October 7 at a Woolworths store in Melbourne’s CBD was among Wednesday’s seven cases.

The QV supermarket, on the corner of Lonsdale and Swanston Streets, is not listed as a high-risk location as DHHS said the case could be effectively contact traced.

There were no COVID fatalities in Victoria on Thursday. The state death toll from the virus remains at 816 (Australia’s toll is 904).