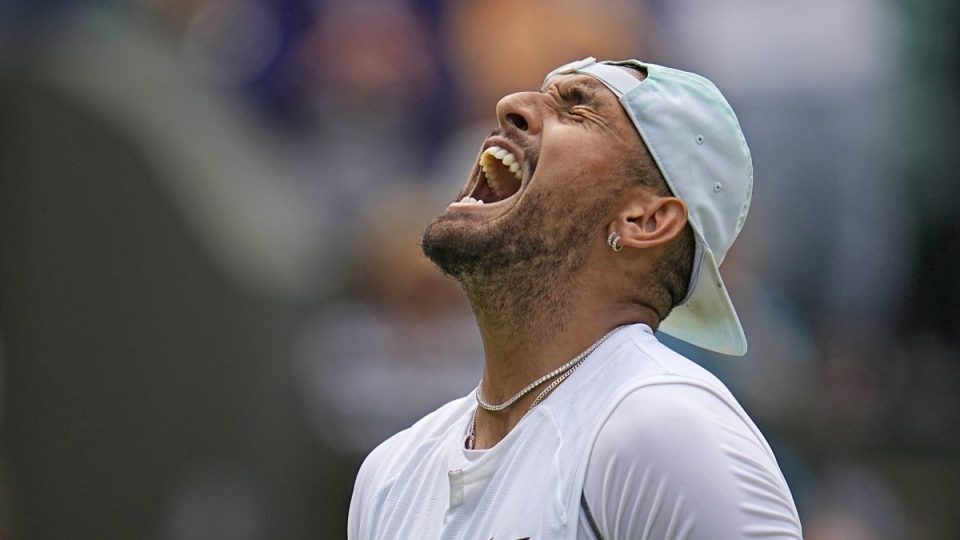 Nick Kyrgios’s Wimbledon campaign has been thrown into turmoil, with the mercurial quarter-finalist facing common assault charges back home in Australia.

Kyrgios will play unseeded Chilean Cristian Garin on Wednesday for a place in the semi-finals, barely 24 hours after being summonsed to face ACT Magistrates Court on August 2.

Kyrgios has already been grilled by London tabloids for his behaviour during the first week of the championships after the one-time world No.13 was fined $US10,000 ($17,600) following his first-round win over British wildcard Paul Jubb and another $US4000 ($5800) after a fractious third-round victory over Stefanos Tsitsipas.

He can expect another lively press conference after playing Garin, win or lose.

The pending court case is an unwanted distraction after Kyrgios promised to fight through the pain barrier of a shoulder injury that required two rounds of treatment during his five-set fourth-round win over American Brandon Nakashima on Monday.

“I woke up after Tsitsipas and had some shoulder pain. I’ve played so much tennis in the last month and a half, so I almost knew that it was time for my body to start feeling some niggles,” he said.

“I think that’s normal. At this time in the event I don’t think anyone is feeling 100 per cent.

“Obviously Rafa (Nadal), you see him dealing with something niggling all the time. I just don’t think there’s anyone feeling 100 per cent.

“It’s just something I manage. Mentally I feel like I just deal with these things a lot better now.”

Kyrgios said he never felt physically 100 per cent against Nakashima.

“But mentally I stayed quite calm, knowing I wasn’t able to serve full out for the whole five sets. Obviously I had to take painkillers,” he said.

“I wasn’t returning well for a period of time, then I just stuck to my guns in the fifth set. I felt like the level in the fifth set for me was raised whereas his level kind of went away a little bit.”

Victory over the 43rd-ranked Garin would vault Kyrgios into a maiden grand slam semi-final against either Nadal or American 11th seed Taylor Fritz.