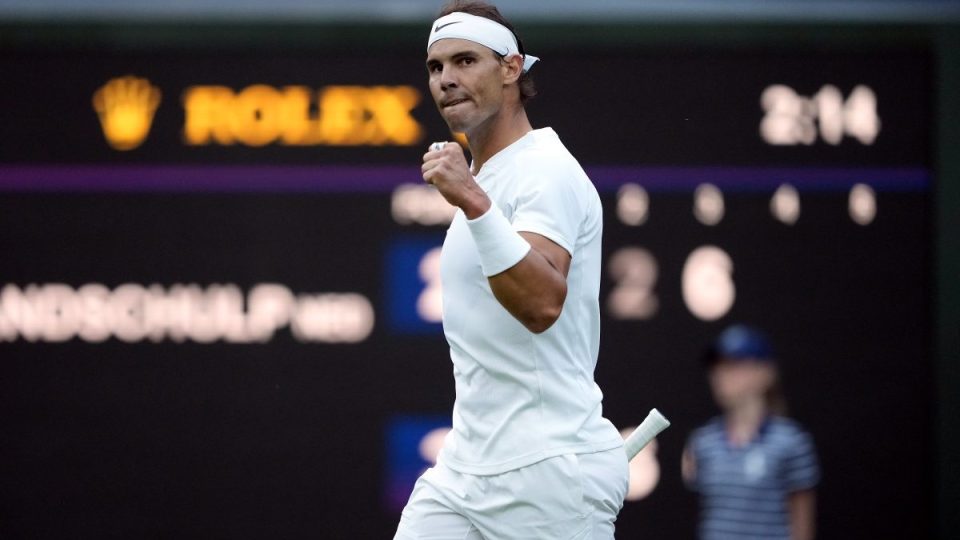 Rafael Nadal’s chances of the calendar grand slam continue to look rosy after he motored convincingly into the quarter-finals of Wimbledon on the third leg of his quest.

The great Spaniard, already halfway to the holy grail of tennis with his wins at Melbourne Park and Roland Garros, powered past Dutchman Botic van de Zandschulp 6-4 6-2 7-6 (8-6) on Monday.

In the same half of the draw as Nick Kyrgios, the 22-time grand slam champ and his old Australian foe are now just a match each away from rekindling one of Wimbledon’s most talked-about rivalries in what would be a blockbuster semi-final.

Not that Nadal will allow himself to think about that yet when he has 11th-seeded Taylor Fritz standing in his way in the last eight.

For as Nadal noted after his centre court triumph in two hours, 22 minutes on Monday, Fritz is having an amazing year. “He won his first Masters final this year – against me (in Indian Wells),” smiled the two-time champ.

But in that US tournament, Nadal had been struggling badly with painful ribs.

Now, reaching his eighth quarter-final on the back of his recent French Open win, Nadal beamed: “After all the things that happened the last couple of months, after three years away from Wimbledon, it’s amazing for me to come back like this, so very, very happy.”

The 36-year-old Nadal had also beaten 21st seed van de Zandschulp on his way to the Roland Garros crown and there never looked much doubt about his progress apart from a late show of resistance from the Dutchman who saved three match points in the tiebreak.

There was never, however, going to be the same sort of race against the clock to beat the 11pm curfew that Novak Djokovic had won the night before, with Nadal taking care of business at the fourth attempt by 9.30pm.

He continues to win despite his attempts to disguise physical ailments.

When asked about his abdomen being strapped, Nadal was the model of politeness before he gently chided his questioner: “Sorry, but I’m a little bit tired of talking about my body.”

That extends his winning streak on grass to eight matches after his triumph in Eastbourne last month.

“It is crazy to go from where I was at maybe mentally after Queen’s (Club), like feeling injured, I’ve just lost like three matches in a row, to now I’m in my first slam quarter-final,” Fritz said.

“It’s a big jump. It’s so interesting. It’s kind of like how tennis is. One, two good weeks, five or six good matches in a row, can kind of just change everything.”