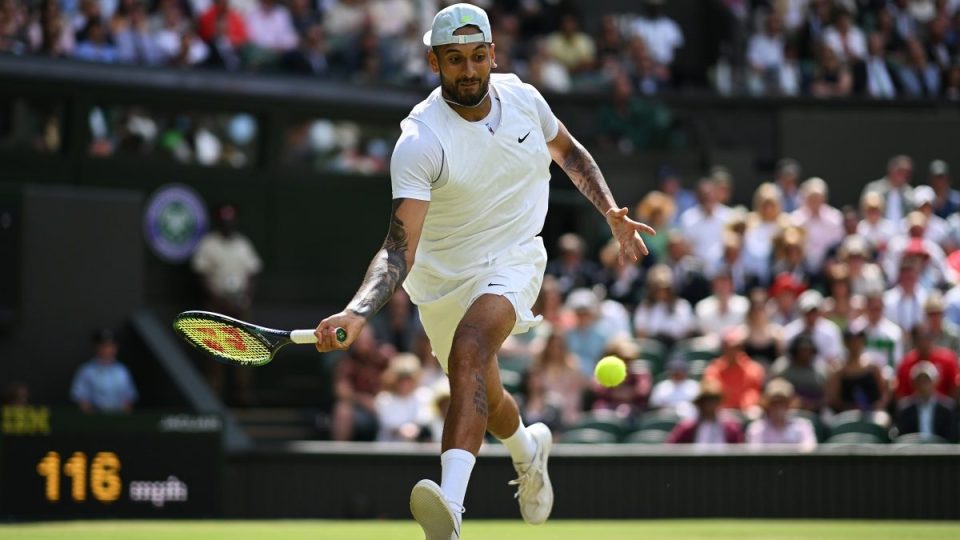 A mellow Nick Kyrgios and an emotional Ajla Tomljanovic have made it a memorable Monday for Australia’s Wimbledon challenge on a day of heart, courage and tears on the lawns of SW19.

A big day for Aussie tennis, with four players in the last-16 draws for the first time since 1999, was tinged with disappointment as both Alex de Minaur and Jason Kubler were knocked out in their fourth-round matches.

But Kyrgios took on the men’s mantle of ‘Aussie battler’ by scrapping his way into the quarter-finals on a day when his famed volatility was replaced by stubborn bloody-mindedness on centre court as he tamed American Brandon Nakashima in five sets while nursing a shoulder injury.

Then Tomljanovic, so often burdened by her own lack of self-belief, produced one of the gutsiest performances of her career to slay Wimbledon’s very own giant-killer Alize Cornet and reach the SW19 quarters for the second time in a row.

No Australian woman has achieved that feat since Jelena Dokic 22 years ago, and Tomljanovic brought a lump to the throats of the fans on court 2 as she declared after her tears subsided: “I didn’t really think I could do it…”

De Minaur and Kubler, the archetypal ‘Aussie battlers’, had to hand over that crown for a day to Kyrgios, who produced, by his glittering standards, a subdued performance with few fireworks – and no controversy – but still wrestled his way to a first grand-slam quarters since 2015.

“I was really excited to play De Minaur to be honest, he’s been flying the Aussie flag for so long and he was two sets up when I came on court,” said Kyrgios, who’d been hoping Australia might get three men into the Wimbledon quarters for the first time in 51 years.

Kubler’s dream run through the qualifiers to his first-ever grand slam quarter-final was then ended in perhaps predictably brutal fashion as he was taken to school by big-hitting American 11th seed Taylor Fritz 6-3 6-1 6-4.

But Kyrgios cast aside the showman’s cloak to knuckle down to his win, which was a mercifully subdued affair compared to the mayhem that had enveloped his previous barn-burner with Stefanos Tsitsipas.

“I knew from the get-go I wasn’t playing as well as I would have liked. I knew I had to keep my head down and just battle today. It was a good mental performance,” said Kyrgios.

Tomljanovic must have been proud of hers too, as she had to come from a set down and hold off a late rally from the indomitable Cornet, conqueror of world No.1 Iga Swiatek in the previous round, before winning 4-6 6-4 6-3.

She will next tackle talented Kazakh left-hander Elena Rybakina, who beat her on clay in their only meeting in Madrid last year.”

“After last year, facing Ash (Barty in the quarter-finals), I can face anyone,” beamed 29-year-old Tomljanovic, who’ll be making good viewing for the Netflix tennis documentary crew who’ve been following her rejuvenating run.