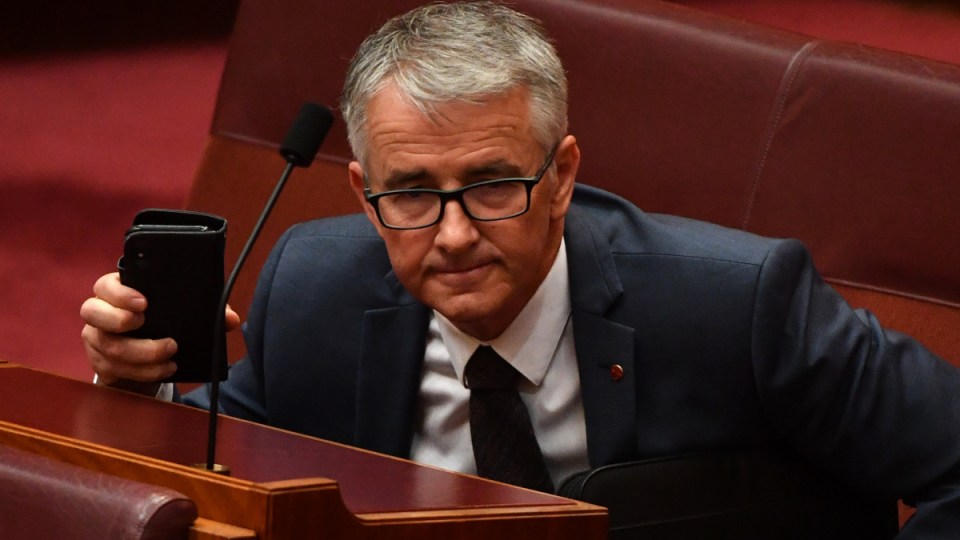 Coalition backbencher Gerard Rennick has threatened to withhold his vote from the government over state border closures, demanding Scott Morrison do more to push back on COVID-cautious Labor premiers.

Senator Rennick wants the federal government to challenge the validity of Queensland Premier Annastacia Palaszczuk’s state border closures in the High Court, under the same section of the constitution as Clive Palmer’s unsuccessful challenge to Western Australia’s hard border.

It’s the latest escalation in the Queensland senator’s opposition to the national cabinet, as he claims the forum for federal and state leaders “needs to go” and shouldn’t be “kept secret”.

In a tense week for relations inside the Coalition, the Liberal and National parties came together for their weekly joint party room meeting on Tuesday morning.

Although the contentious net-zero emissions target wasn’t mentioned by either Mr Morrison, Deputy Prime Minister Barnaby Joyce or Treasurer Josh Frydenberg in their speeches to the room, two backbench members did speak up with their concerns.

TND understands one of those was Senator Rennick, who rubbished claims from some – including Mr Frydenberg and Finance Minister Simon Birmingham – that Australia risked being cut off from foreign capital by international lenders and markets unless a net-zero target was adopted.

According to people in the room during the meeting, Senator Rennick went on to say that he would not support the government in Senate votes, due to anger over national cabinet not doing more to open state borders to returning residents.

Senator Rennick told the party room that he was concerned about Queenslanders who had been blocked from re-entering the state, due to Premier Palaszczuk’s COVID control measures.

He said he would “consider withholding” his vote in the Senate over the matter, and called for the national cabinet to be disbanded.

He told colleagues on Tuesday the leaders’ meeting “shouldn’t be secret”, according to those present.

TND understands Senator Rennick has told colleagues he’s “had a gutful of the premiers”.

He said the border situation was not the Prime Minister’s fault, but has demanded Mr Morrison “push back and step in”.

Senator Rennick proposed the federal government challenge the validity of the border closure in the High Court, called on Attorney-General Michaelia Cash to bring a case based on section 92 of the federal constitution.

That section states “customs, trade, commerce, and intercourse among the states, whether by means of internal carriage or ocean navigation, shall be absolutely free”.

Mr Palmer, the leader of the United Australia Party, was unsuccessful in his bid to challenge the constitutionality of WA’s border closure on the same grounds.

It’s understood Senator Rennick has given assurances he would support the government on procedural motions in the Senate, and would oppose Labor motions to shut down the chamber.

However, he said he would not support the government’s legislation for a period.

The Coalition holds 36 of the 76 seats in the Senate.

On votes where Labor and the Greens – totalling 35 votes – oppose government measures, the Coalition usually needs three of the five remaining crossbenchers to pass legislation.

Senator Rennick’s abstention from votes could make it trickier for the Coalition to pass contested legislation.