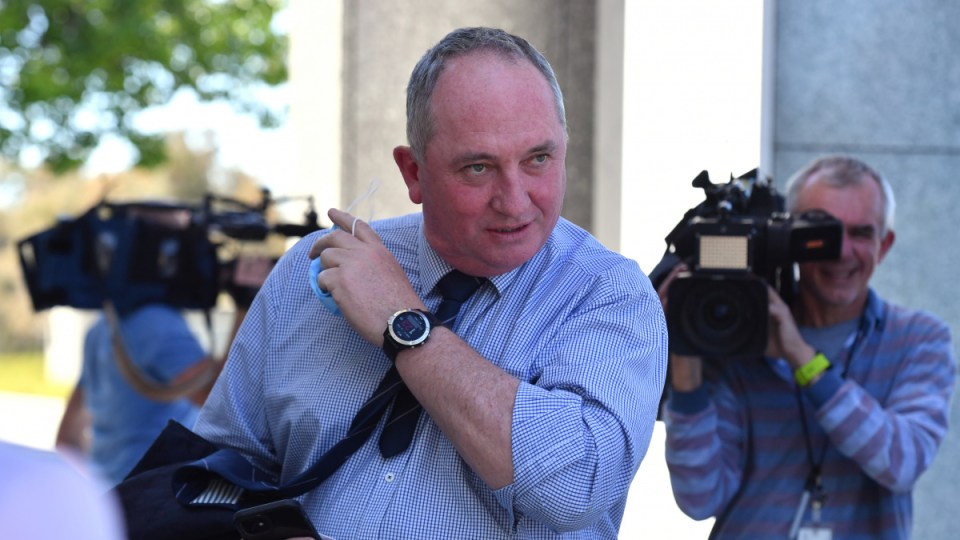 Barnaby Joyce warned of a "ripple effect" if the Nationals were pressured. Photo: AAP

Barnaby Joyce has warned Prime Minister Scott Morrison off “threatening” the Nationals to quickly sign up to the net zero by 2050 pledge, saying the rural party would simply reject the plan in the face of political pressure from the Liberals.

With just two weeks until the Glasgow climate summit, the fight over net zero is turning ugly as the two Coalition parties brawl over the plan.

Mr Joyce, the Deputy PM, raised his own threat of a “ripple effect” through the government if the Liberals rammed through an emissions plan without the Nationals being given proper time to consider it. But Mr Morrison said the cabinet – not the Nationals – would make the final decision.

“We’re not chained to a script. We have our own party and our own party room for a distinct purpose – that at times we have variance of views, we have divergent views and we have different views,” Mr Joyce told ABC News on Monday morning.

“If we ever believed that we were being sort of threatened or pushed or stood over, I know what the outcome of that position is – the people just say, ‘no’.”

The Nationals were given a first look at the net zero by 2050 plan – formulated by the Liberals and Energy Minister Angus Taylor – on Sunday afternoon. After a presentation by Mr Taylor, and four hours of deliberation, the junior Coalition partner failed to reach an agreement.

Mr Joyce said the Nationals needed more time to look at the plan, saying they still had concerns.

“You’re not gonna do that on four hours on a Sunday night,” he said.

The Coalition has been in government since 2013. Mr Morrison has flagged action on a formal net-zero target since February.

Deputy Nationals leader David Littleproud had a similar view, saying it was “a very complex issue” and claimed it’d be “reckless” for the party to sign up quickly after the meeting.

“We’re going to come back together again today, and there’s a lot of questions. And you’ve got to understand when something like this is presented, obviously, for the first time, you need to sleep on it,” he told 2GB on Monday.

But despite the Nationals’ hesitation, Mr Morrison flagged that their reluctance may not hold him up. Instead, he said the cabinet – with just four Nationals in the 23-member panel – would decide on the final outcome.

“That’s where these decisions are made, all member for the government understand that.”

However the PM all but confirmed the government would not take an increased 2030 target to Glasgow, like a 50 per cent emissions cut as had been urged by many climate experts. Instead, Mr Morrison said he would “advise the COP26 in our success in meeting and beating” current targets of 26-28 per cent. Mr Joyce had said it was “highly unlikely” the Nationals would back such a plan.

Labor leader Anthony Albanese claimed the government was “hostage to a few people in the National Party”.

“We all know that it is in Australia’s economic interest to have action on climate change, including net zero by 2050 and a pathway to get there.”

The Australian Financial Review reported there could be “tens of billions” of dollars for regional infrastructure and communications projects on the table, as sweeteners for Nationals to back the plan.

But Mr Joyce rubbished those claims in Question Time on Monday, describing the report as “utter tripe” and saying “just because you read it, it doesn’t mean they said it”.

The net-zero debate looks to take over this week in federal Parliament, as politicians return to Canberra for the first time in six weeks. The Liberals held a party room meeting on Monday morning to consider the plan, before a joint Coalition meeting on Tuesday.

Environmental protesters from the Extinction Rebellion group assembled outside Parliament House on Monday morning, holding signs at the driveway by which many politicians enter the building. Several were arrested.

Despite the clock ticking down to the Glasgow summit at the end of October, Mr Joyce declined to say when the Nationals might be able to come to an agreement on net zero. However, he admitted the debate could cause a rift in the party.

Other Nationals ministers, including Keith Pitt and Bridget McKenzie, have also expressed concerns. Mr Joyce said it would be “the bleeding obvious” that ministers would have to quit cabinet if they disagreed with a decision, warning this could have wider consequences.

“The process is quite clear. Everybody is in cabinet at the behest of the Prime Minister. That includes me,” Mr Joyce said.

“Hand in glove goes with that is the ripple effect through the Coalition. You know, everything comes with rights and comes with consequences, and everybody is aware of that.”

Asked if he thought the debate could split the Coalition, Mr Joyce responded “I hope not. We don’t suggest that.”

Mr Littleproud said the party would “take our time. ”

In a press conference, assistant attorney-general Amanda Stoker said she believed it was important regional communities weren’t “shortchanged by the pre-occupations of the people in this building”.

“It shows that all of these different members of the Coalition party room are robustly representing the people who live in their patch,” Senator Stoker said.