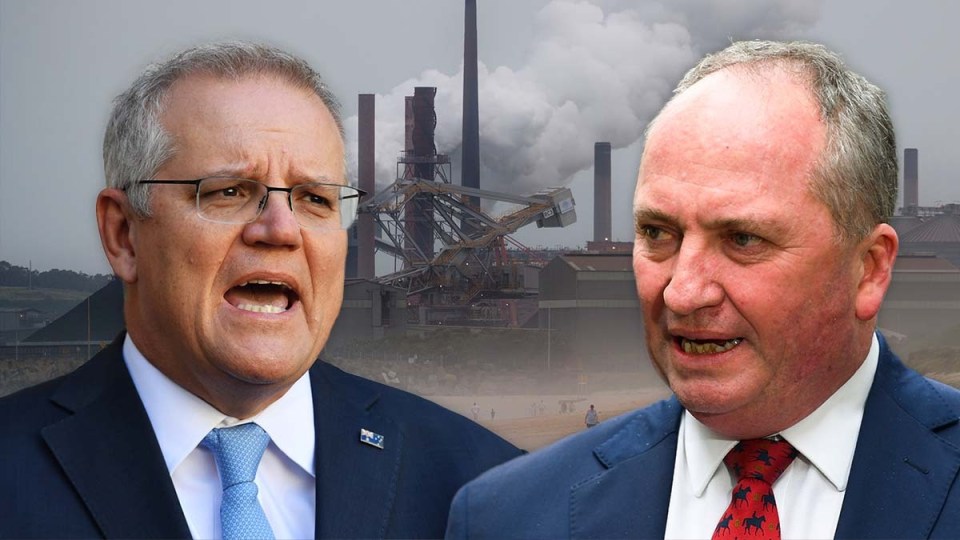 Will Scott Morrison have a pat with the Nationals when he leaves for Glasgow? It's still up in the air. Photo: TND

Scott Morrison’s chances of reaching a net zero by 2050 agreement with the Nationals hang in the balance, after a four-hour party meeting on climate policy reached no position.

The Nationals ended their intense discussions on Sunday seeking more information after hearing from Energy Minister Angus Taylor on the details of the plan to cut carbon emissions — which will go to a Liberals partyroom meeting on Monday.

Nationals deputy leader David Littleproud said after the meeting there had been “divergent views” expressed.

“There were still some more questions that need to be answered,” he told Sky News.

He said supporting a more ambitious emissions target would be one of the biggest decisions his party had ever made and he and colleagues would not be rushed into it.

The Nationals are adamant the coal industry must be allowed to continue well into the 2050s.

Mr Littleproud said there was strong support within the Nationals for nuclear power to reduce emissions.

With just two weeks until the Glasgow climate summit, a formal commitment to the net-zero emissions target might be within reach after years of inaction.

But ahead of Sunday’s meeting Nationals leader Barnaby Joyce foreshadowed a more ambitious 2030 target would be “highly unlikely”.

“We are not in the Liberal Party room. We are the Nationals. We will not be held hostage to what other people wish,” the deputy Prime Minister said on Sunday.

The bizarre standoff between the two Coalition parties was branded a “pantomime” and “self-indulgence” by Labor leader Anthony Albanese.

Many months of foreshadowing and false starts finally came to a head on Sunday afternoon.

Energy Minister Angus Taylor said it was a “constructive and collegiate” meeting about “policies that strengthen” regions and traditional industries.

But it’s just the first step in negotiations expected to drag on through the week.

Despite the Nationals holding just 21 of the 112 seats in the Coalition party room, the junior partner is the key sticking point.

Mr Joyce and party colleagues like Keith Pitt and Matt Canavan have already set their price for considering the target – demanding billions of dollars in public funds for projects like inland rail lines to coal mines or government loan facilities for new mining projects.

Mr Morrison wants to formally commit Australia to net zero by 2050 at the COP26 Glasgow climate summit at the end of the month, but left it until just 14 days before the summit starts to share his party’s plan with the rural Coalition partner.

The Liberal party room will see the plan on Monday, before the joint Coalition party room considers it on Tuesday.

The world moves on

Yet as the Coalition debates whether to commit to net zero by 2050, most world leaders heading to Glasgow are preparing to announce more ambitious short-term targets, having long since made their net-zero pledge.

Climate scientists say 2030 targets are even more pressing than 2050 targets, with the next decade the critical time frame for arresting irreversible climate change.

Mr Joyce, giving a press conference outside Parliament House as he entered for the afternoon meeting, rubbished chances of the Nationals agreeing to a higher 2030 target of 50 per cent emissions reduction.

“I think that is highly unlikely,” he said.

Despite being leader of the Nationals and Deputy Prime Minister, Mr Joyce has painted himself as a mere observer of the negotiations.

He constantly stressed that he would not “dictate” to the party room but that his colleagues would make the final decision on whether to back the net-zero plan or not.

“Something as important as this is a decision that is not made by one person – it is not even made by the leadership,” he said.

“Certainly not,” he told Sky News.

“We bring together people right across the country to be able to effectively consider all of the implications and issues.”

Liberal ministers have painted a net-zero commitment as an economic boon and critical to avoiding penalties like trade tariffs or interest rate hikes in international arenas.

“Other nations are already making decisions that will have impacts on Australia and that’s why we need to invest and position ourselves to make sure we can take advantage of opportunities and make the transition successfully to protect jobs, to protect regions,” Senator Birmingham said.

‘An act of self-indulgence’

Health Minister Greg Hunt, a former environment minister, said he was “very confident” that Mr Morrison would unveil at Glasgow “an appropriate package which is ambitious for emissions, but reduces the pressure on electricity prices and protects jobs”.

But Mr Albanese ridiculed the negotiations between the Liberal and National parties, claiming they were “wrecking their own government”.

“This is such an act of self-indulgence, to have National Party ministers, including the Deputy Prime Minister, acting as if they’re not part of the Coalition government,” he said.

“I’m sure this is just a big pantomime. And what we will see is an adoption of net zero by 2050, but without any significant increase in a target, which is necessary, for 2030.”

“What we have seen is eight years, three prime ministers, 21 energy policies, and now we have got the Prime Minister trying to wrangle a last-minute deal with the National Party about what they actually stand for,” she said.