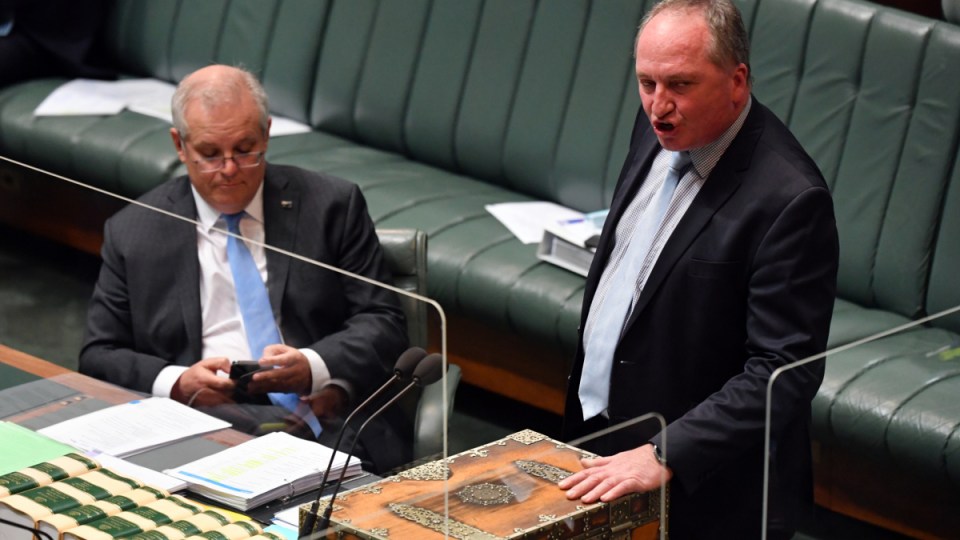 A $250 billion mining loan is the latest inflection point in net-zero negotiations between Scott Morrison and Barnaby Joyce. Photo: TND

A Nationals proposal to create a $250 billion mining fund in exchange for support of net zero by 2050 has been labelled “completely crazy” as government infighting over climate targets mounts before the Glasgow climate summit later this month.

Nationals MP and Resources Minister Keith Pitt said on Thursday that taxpayer money should be used to prop up miners if and when banks refuse to give them loans.

As Prime Minister Scott Morrison tries to get the junior Coalition partner over the line on a net-zero target, Mr Pitt told the AFR that the government must ensure miners can access new funding and insurance by acting as a lender of last resort.

Experts immediately slammed the proposal, saying it would leave taxpayers on the hook for dud mining investments as coal is phased out.

The idea has also reignited internal tensions within the government, with Liberal MPs Jason Falinski and Dave Sharma criticising the loan facility.

“The idea that taxpayers should be lending money for the expansion of an industry that the rest of the world is phasing out is completely crazy.”

Instead, Mr Campbell said the $250 billion price tag could “buy the entire coal industry … and shut it down in an orderly fashion”.

He cited Australia Institute research into Germany’s plans to phase out coal power by 2038, which has been priced at €40 billion ($67 billion).

The $250 billion fund has been priced at almost three times the cost of JobKeeper and about four times the price of the costly NBN rollout.

Although it is not official National Party policy, it would not be the first time that the government has outlaid money for fossil fuel projects in the face of fierce criticism.

Earlier this year, Energy Minister Angus Taylor announced $600 million in federal funding for a new gas-fired power station in NSW, baulking at warnings the investment would fail to deliver a positive return.

Deputy Prime Minister Barnaby Joyce, who is leading negotiations with Mr Morrison on net zero before Glasgow, told the ABC on Thursday he was “sympathetic” to the idea of loaning miners about $250 billion.

The Nationals are worried that bank and insurer boycotts of fossil fuels as part of their own net zero by 2050 commitments are leaving miners with no options for funding on new projects, threatening Australian exports.

“You can’t have the sovereignty of your nation determined by what a board decides they will invest in or not,” Mr Joyce told RN Breakfast.

It comes as Australia is labelled a pariah on the world stage for its conservative 2030 targets – to cut emissions by 26 to 28 per cent of 2005 levels – amid warnings inaction will cost Australia $4.3 trillion.

Samoan Prime Minister Fiame Naomi Mata’afa said on Wednesday that Australia must unveil more ambitious 2030 targets, warning Glasgow may be a “point of no return” for efforts to avoid “catastrophic” warming.

Mr Morrison told reporters on Thursday afternoon that he would discuss the $250 billion mining facility proposal with the Nationals in cabinet meetings.

“I’m looking forward to what has already been, I think, a very good faith process,” he said.

But Mr Morrison still faces divisions over climate within his own government, with moderate liberal MPs criticising the Nationals proposal on Thursday.

“Hard-fought economic reforms in Aus in 80s & 90s taught us supporting structural adjustment & transition, in response to global economic forces, is a legitimate role for government,” he said.

“But NOT [sic] bailing out industries that are no longer competitive, or that no longer enjoy a market.”

Other government backbenchers supported the idea, including Nationals Senator Matt Canavan, who told The New Daily he was a fan of the fund but would continue to oppose any federal government net-zero targets.

“I support the government acting here to make sure we have finance to essential sectors like resources,” he said.

Senator Canavan said he’s no ideologue or libertarian and welcomes a government role in the fossil fuel industry.

“There’s a practical role for governments to help and support the national interest,” he said.