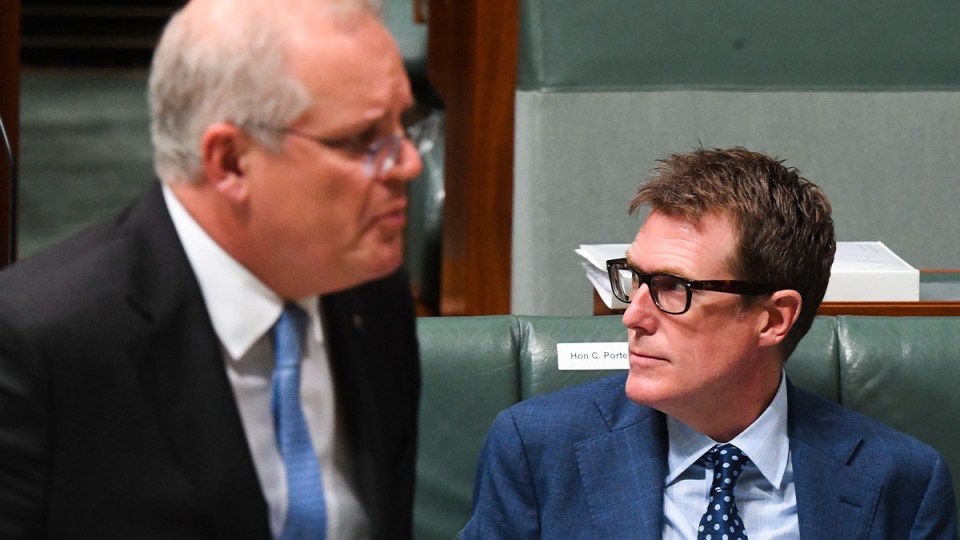 Michael Pascoe says the Liberals have done their best to put up smokescreens, but there's more to the story. Photo: AAP

Time and again, it is cover-up and denial that damage beyond the original claims. So it is proving to be with the “Canberra Bubble” scandal.

Despite the Prime Minister’s best efforts to deflect, the Opposition Leader running dead, the Coalition’s media cheer squad predictably declaring “nothing to see here – it’s the ABC” and Joel Fitzgibbon providing an alternative sideshow, Four Corners’ story of politicians behaving badly is by no means over.

There inevitably are other shoes to drop once the lid is lifted on such a subject.

The lid is being kept lifted though by the inadequacy of addressing the key on-camera complaint and, in my opinion, Attorney-General Christian Porter being cute in the wording of his denials.

There also is the little matter of gross hypocrisy – never a good look.

While the usual suspects on Sky News and in The Australian’s pages were concentrating on sex, fulminating about the ABC in general and reporter Louise Milligan in particular, Maiden cut to Rachelle Miller’s actual complaint: “What she is making is an allegation about is workplace behaviour. She put in a complaint about bullying. She talked about the treatment she was subjected to and she said, having had that sexual relationship, she was bundled out the door. These are serious issues.”

And this is where the hypocrisy is thick on the ground.

Compare and contrast the immediate absolution the Prime Minister and media pack have granted Alan Tudge with the way allegations were handled about bullying with a whiff of sexuality when the subject was a woman.

Ms Maiden: When you strip away the fact there was a consensual relationship, even if you accept the Prime Minister’s technical argument that essentially this was a relationship that predated the bonk ban, what you’re left with is a formal complaint to the Department of Finance.

So we’re actually in the category here now of Emma Husar. Alan Tudge is in the same position that Emma Husar was in when there were complaints made about her.

We had a situation where the media pursued that relentlessly. She had television cameras out the front of her house with children inside. She had microphones being shoved in the faces of her staff.

I don’t see any of that happening. I have had women this week say to me: “What’s going on with the media? There seems to be some protection racket and everyone is polite and accepts the fact that Alan Tudge put out a statement and that’s the end of it.”

Alan Tudge would be under intense pressure and Alan Tudge, in Emma Husar’s case, would be asked whether he wanted to resign or not contest the next election.

This happened to Emma Husar before the findings of that report came down. That report threw out a lot of the allegations. She had been involved in what was unreasonable management practises in her office.

It strikes me that, Emma Husar and Alan Tudge, there are parallels and we are treating them differently and the same media outlets and the same journalists that enthusiastically and relentlessly pursued Emma Husar – a woman who was a nobody, a backbencher in opposition – are saying that Alan Tudge is not a story.

I know it’s too easy, but cue The Australian’s ever-reliable Janet Albrechtsen in high dudgeon over Ms Husar in August 2018: “If serious allegations of bullying are proven, she should be sacked because the voters of Lindsay deserve better than her”; “misusing and abusing your staff ought to be a heinous crime that attracts heinous penalties”; and, hilariously, “If a male MP were accused of bullying his staff and treating them like slaves, he would be cut adrift.”

And then there’s Albrechtsen this past Saturday. Her conclusion, for example: “The upshot is that Turnbull, a group of apparently disgruntled women and other political junkies, have exposed a far more serious cultural problem than anything within the Liberal Party.

“They showcased how the revenge culture formalised by the #MeToo movement continues to backfire against women. Evidence of wrongdoing stands alone. Claims not backed by evidence invite us to check the motivations of accusatory women.”

Or there’s The Australian’s Angela Shanahan whose spray was mainly devoted to attacking reporter Louise Milligan – “vituperative ABC virago”, “taking a breather from her usual occupation of penning scandal about the Catholic hierarchy, Milligan set herself up as implacable feminist avenger of her sex”.

We did learn though that Mrs Shanahan (and presumably husband Dennis – The Australian’s political editor) “have had senior ministers and two prime ministers at my family dinner table, all people of impeccable character and sexual moral probity” before reaching her conclusion that: “What is more, casting the first stone is wrong.

“It is for individuals to be responsible for their own sexual behaviour,” she wrote. “Only when it impinges on the smooth running of Parliament and the general welfare of the Australian electorate can it be of any interest to anyone else.”

Ignored by The Australian columnists was Scott Morrison’s double deflection of the issues. No surprise on either count – the ignoring or the deflections.

As suggested before, a Prime Minister incapable of reining in mere backbenchers – “Hydroxychloroquine” Kelly or “Voter Fraud” Christensen – is in no position to discipline senior ministers.

Mr Morrison’s immediate go to was that nothing happened on his watch and it was before the don’t-call-it-a-Bonk-Ban, so there’s nothing to see and everyone should move on.

The government’s second deflection is referring Ms Miller’s actual bullying complaint to the Finance Department – a fudge that worked for some, but not Ms Maiden: The Department of Finance is a useless and hopeless organisation to investigate this because they have no power to take any action on any MP or minister because they are not their employer.

This is the whole reason why, for example in the Husar case, the staff didn’t want to go to the Department of Finance because they know it is a toothless tiger.

I think there are real questions. You’re going to see this in the next week. Women in the Labor Party that want to support Ms Miller and think the Department of Finance process is not going to work and they want some bipartisan support between the Liberal Party and the Labor Party to set up some independent process to look at the claims.

They know if they go to the Department of Finance with a complaint about another staff member, that can be investigated. But if they go with an MP, there is nothing that can be done.

Just to be clear, the Finance Department…is technically not the employer of any MP. Can it actually take any action, any penalty against a member of parliament? No.

And, serendipitously, The Saturday Paper published Karen Middleton’s story over the weekend about the government refusing to reveal the results of an investigation into a bullying complaint involving the office of Indigenous Affairs Minister Ken Wyatt, not even to the woman who made the complaint.

“The Department of Finance has rejected an application from Wyatt’s former chief of staff, Kate Johnson, made under freedom of information laws, for access to a copy of the report into the complaint she made two years ago against Wyatt’s former policy adviser Paula Gelo,” Middleton reports.

“The refusal highlights the opaque and circular nature of the only complaints process available to parliamentary staff when concerns about bullying, sexual harassment or other workplace issues arise – and the confusion over who actually employs them.”

Yet to come is Maiden’s suspicion that former Labor staffers “are going to come out in support of Ms Miller”.

I wonder how Ms Albrechtsen & Co will cover that. (No, I don’t really.)

And so far unanswered are questions Louise Milligan tweeted on Thursday:

5. Given that there are people who are happy to verify all of these points, including people who would be subpoenaed by a court of law, what does that say about the truth of the public comments made by the Commonwealth Attorney-General since our story went to air?

Questions from @4corners for @AlanTudgeMP, given the Commonwealth Attorney-General is denying events at Public Bar witnessed by multiple people, including Rachelle Miller, a senior journalist, a public servant & at least three other Lib staffers (one made a file note):

Why did you pressure the journalist to delete the photograph of Mr Porter and the young female staffer?

Why did you arrange to meet at Aussies Café, Parliament House, the following day, to again ask the journalist to delete the photograph?

Why were there complaints made to the staff of then-Prime Minister, @TurnbullMalcolm, about your efforts to try to get the journalist to delete the photograph?

Given that there are people who are happy to verify all of these points, including people who would be subpoenaed by a court of law, what does that say about the truth of the public comments made by the Commonwealth Attorney-General since our story went to air?

Would you agree that it is incumbent upon all ministers of the Crown, but most particularly, the first law officer of the Crown, to be truthful at all times?

No, the “Canberra Bubble” story is still afloat and not floating away.