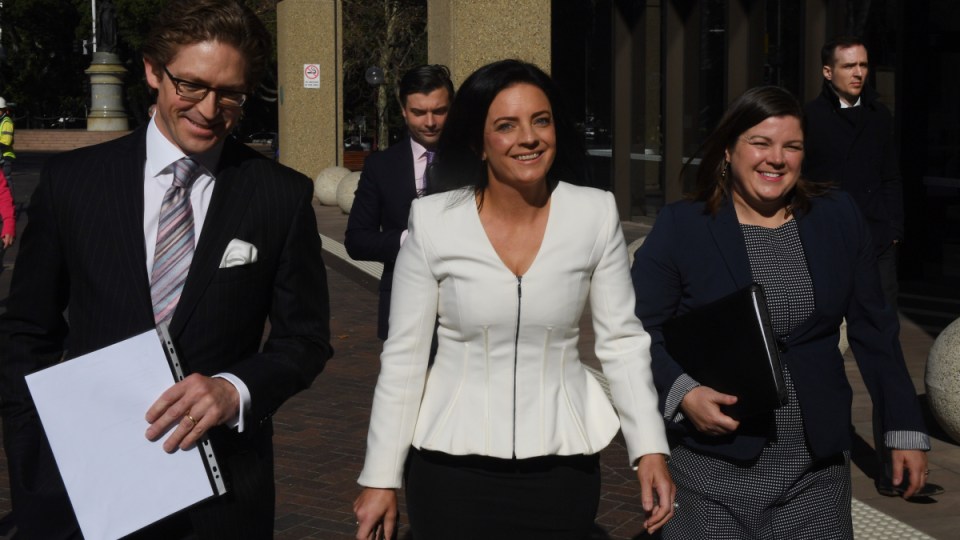 Former Labor MP Emma Husar has spoken about the devastating toll of a BuzzFeed report she maintains “slut-shamed” her after winning an apology and the removal of the offending article.

The settlement of the defamation action on Tuesday follows journalist Alice Workman’s admission she did not contact Ms Husar before publishing allegations in 2018 that the then-member for Lindsay flashed a Labor colleague in a “Sharon Stone” move.

“BuzzFeed and Alice Workman acknowledge that they should have given Ms Husar an opportunity to respond to the article before it was published, and apologise for the hurt and distress caused to Ms Husar and her family,” the statement said.

A confidentiality clause prohibits either party from disclosing if Ms Husar was awarded a financial settlement.

BuzzFeed said there was a clear public interest in publishing the original allegations.

“BuzzFeed considers reporting on the staff complaints was a matter of public interest,” the statement said.

“Following a mediation, the matter was resolved and BuzzFeed has agreed to take down the article, without an admission of liability.”

Ms Husar claimed the publications conveyed false and defamatory meanings, including that she was a “slut who boasts about who she has had sex with, including other MPs and staff”.

BuzzFeed argued it had not implied she was “a slut” and maintained a truth defence to allegations that Ms Husar was “sexually perverted” and “engaged in inappropriate sexualised behaviour toward her staff”.

Ms Husar, a single mother of three who remains out of work since the scandal, told The New Daily she had been largely ostracised by her former Labor Party colleagues.

The only Labor MP to contact her this week, after BuzzFeed agreed to settle the case, to check on her welfare was former leader Bill Shorten, and his wife Chloe.

Ms Husar said she had hit “rock bottom” over the saga.

“It has been hard for the kids and for me and I hope our media take a more considered approach when dealing with unproven allegations. The damage when they do not is unacceptable,” she said.

“I am happy that with the publication of the statement by BuzzFeed and Alice Workman this chapter is nearing completion. However, it isn’t one I should have ever been written into.

“I took action against this unprecedented reporting, not only for me and my children but for the women in public life who will follow after me.

“It has been a public humiliation of the worst kind with the most terrible things you could say about a woman.

“The last 12 months of my life saw me hit rock bottom and have been the hardest yet. The only certainty has been the support of reliable and trusted friends who I value immensely.

“The only place to go to from here is up. I look forward to continuing to speak up, stand up and advocate for those in need, by drawing on my own experience to help others who are facing a hard time.”

The original article included a list of allegations in a supposedly “confidential” inquiry into allegations from Ms Husar’s former staff.

No basis for resignation

Barrister John Whelan ultimately found there was no basis for Ms Husar to resign from Parliament and the allegations she had “flashed” at an MP were not supported.

Ms Husar and Blaxland MP Jason Clare were chatting in his office with his baby when the incident was alleged to have occurred. Both flatly denied it happened.

But the report found complaints that staff performed non-work-related tasks and personal duties for Ms Husar had merit.

Complaints that staff were subjected to unreasonable management, including unreasonable communication, demands, practices, and disciplinary methods, also had merit.

Meanwhile, the Liberal Party is facing allegations from two female staffers who say they were sexually assaulted while working for senior politicians.

One woman told the Nine newspapers that a parliamentary staffer pinned her down and ripped off her underpants during a sitting week in Canberra in 2015.

Both women are calling for a new, confidential internal complaints process in the Liberal Party.

“It was very quick and very sudden and quite forceful,” Chelsey Potter said.

“It wasn’t until I started to really yell that he stopped and left the room.”

A colleague later asked if she would reveal the incident if the man stood for preselection as a candidate.

“A few months later down the track he called me again and said ‘We are considering this guy for preselection. Would you feel compelled to speak out if he was preselected?'” she said.

‘For the women who follow me’: Emma Husar tells why she fought BuzzFeed ‘slut-shaming’