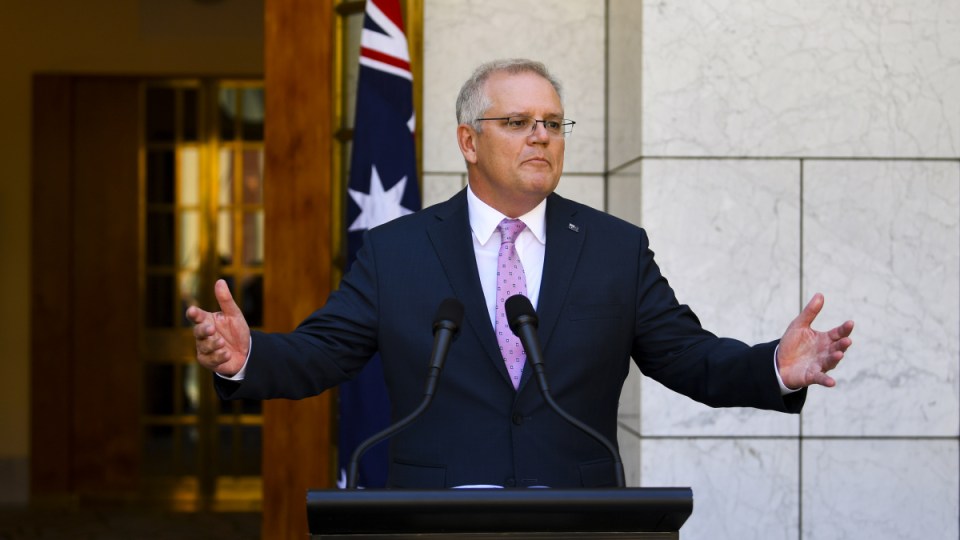 Scott Morrison said issues around allegations of two of his senior ministers having affairs with staff are “important”, but he won’t open an investigation as he wasn’t Prime Minister at the time.

Mr Morrison said relationships between politicians and their staff raised concerns, but stopped short of criticising either Christian Porter or Alan Tudge, who are at the centre of what one senator has called “Parliament’s Me Too moment”.

“They have engaged in no conduct, as they have served in my
cabinet, that is in breach of the code,” Mr Morrison said in Canberra, of the report aired by ABC’s Four Corners on Monday.

Mr Tudge has said he “immensely” regretted his actions, but Mr Porter has strenuously denied what he called “baseless claims” and flagged possible legal action.

Mr Morrison said his predecessor, Malcolm Turnbull, was in charge at the time of the alleged conduct, and that action had already been taken, so he didn’t plan to carry out his own probe.

“These are matters that were dealt with by the former prime minister years ago,” he said.

But he asked journalists not to use the term ‘bonk ban’ – a phrase he said did not reflect the “seriousness” of the issue.

“There are a number of families that have been broken, and there are some people who are really hurting over this,” he said.

“I know the people involved in these issues are working really hard to try to restore what has been terribly lost.”

“These things happen in Australia. People do things and they regret them, they do damage to their lives in the lives of many others, and I know there would be deep regrets about that.”

Mr Porter told Perth’s 6PR radio on Tuesday that the incident raised with him by Mr Turnbull involved nothing more than having a drink with a woman in a bar.

“I have never breached that ministerial code of conduct and there’s never been any suggestion I have,” he said.

“This goes back to the allegation that this description of something that happened in a bar was indicative of something more and it wasn’t.”

He downplayed the ABC story as a “massive distraction” that had been “conducted pretty unfairly”.

Mr Porter said he told Mr Turnbull there was “no substance” to the story about the bar, and also rubbished the reporting by ABC.

Christian Porter has now acknowledged on 6PR that Four Corners did contact his office multiple times over two weeks. We requested an interview and put direct 21 questions to him.

On Monday, Mr Porter claimed ABC journalist Louise Milligan “never contacted me or my office”. On Tuesday he admitted he had been contacted by the broadcaster before the story ran.

ABC reporter Lucy Carter tweeted that Four Corners contacted his office “multiple times” and had “put 21 direct questions to him”.

Greens senator Larissa Waters claimed the Four Corners program represented “Parliament’s Me Too moment”, and called for Parliament to be “a safe workplace”.

Labor MP Terri Butler praised the women who spoke to Four Corners as “courageous” and said they should be supported.

“All women deserve to be safe at work, and all staffers deserve to have their workplace be a safe workplace,” Ms Butler said.

“I don’t think this should be a partisan issue. The question here is, how can people feel safe at work? How can we make sure women have a safe workplace?”

One who publicly backed Mr Tudge and Mr Porter was Nationals MP Barnaby Joyce. He was famously forced to quit as deputy PM in 2018 after revelations he was engaged in a secret relationship with a staff member.

Mr Joyce said he didn’t want to see the ministers lose their jobs after the ABC report, and that Mr Porter was fit to continue as Attorney-General.

“I could get a lot of schadenfreude and revenge saying ‘no, all these other people should go as well’, but that would be wrong,” Mr Joyce said in Parliament House on Tuesday.

Mr Joyce alleged people “on both sides of politics” had similar dalliances, and claimed he told then-PM Turnbull about other such relationships at the time of his 2018 sacking.

“I feel the ‘bonk ban’ was never a bonk ban, it was a Barnaby ban that was created to remove me from office,” he said.

Other government senators had called the ABC’s “impartiality” into question on Monday, in an extraordinary Senate estimates appearance by managing director David Anderson.