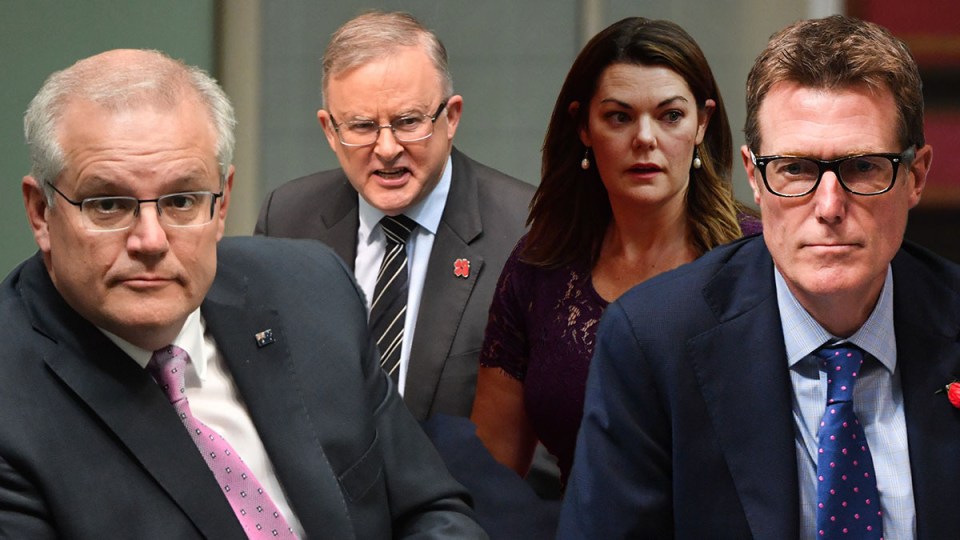 It’s the biggest story in Canberra. In offices and around cafe tables, on hushed phone calls and in bars, it’s all anyone is talking about.

But in public the politicians in Parliament are saying very little about the explosive allegations made against senior Coalition ministers on the ABC’s Four Corners program. And not just those in government.

The normally bustling “conga line” of politicians lining up to do doorstop interviews outside Parliament House each morning has been remarkably bare.

But the issue isn’t going away anytime soon – and leaders are waking up to more headlines on the scandal on Thursday morning.

This time, it’s Employment Minister Michaelia Cash who should be preparing for a day question dodging.

The Sydney Morning Herald is reporting Senator Cash is at the centre of a complaint by Rachelle Miller, the woman who spoke to the ABC about her affair with senior minister Alan Tudge.

Ms Miller alleges that she was bullied out of politics, and felt punished for her relationship with Mr Tudge.

The complaint explains how the staffer felt excluded from meetings and was asked whether “personal issues” were undermining her work, SMH reports.

Ms Miller goes on to allege that she became the victim of a “fake redundancy” process.

“There were no grounds for this, there had been no performance management process put in place nor had I received formal warnings,” she wrote, according to SMH.

“I had almost no discussions with the minister regarding this process and was excluded from speaking with her. She refused to answer my calls or messages and emails.”

The ABC reports that in the 14-page complaint Senator Cash is accused of sending “attacking and demeaning” messages about Ms Miller.

The documents is separate from the former staffer’s complaint against Mr Tudge.

Senator Cash has denied the claims, but that surely won’t put the issue to rest just yet.

We can assume Thursday will bring with it another day of question dodging in Canberra.

The morning after the Four Corners aired, literally one single politician arrived to front the press on the steps of Parliament House (normally it would be a dozen or more).

“This is Parliament’s Me Too moment,” Greens senator Larissa Waters said. She was the lone doorstop arrival, as the rest of her colleagues gave it a miss.

The few politicians who did come in through the front doors to the building – passing by the press pack instead of walking in through the underground car park entrance – were also silent.

They claimed they hadn’t watched Four Corners (a stretch of the imagination to believe) or simply waved away questions.

Others kept their heads down while pretending to be on the phone.

In the daily question time, normally where opposition MPs grill the government about the scandal of the day, there was just one question from Labor on the ABC reports about Mr Tudge and Attorney-General Christian Porter.

Opposition Leader Anthony Albanese asked a brief, non-specific question on whether the Prime Minister could “assure Australians that his ministerial standards have been and will be enforced?”

Mr Morrison gave an equally brief answer, saying that was “always the case”.

Greens leader Adam Bandt asked a more robust question, asking whether the PM would open an investigation and stand down the ministers.

The answer, as detailed in an earlier Morrison press conference, was no.

Other politicians, asked about the issue in media interviews, trod carefully.

Some cited Mr Porter’s “categorical” denial and potential legal threats against the ABC in declining to comment.

Others spoke generally about making Parliament a safe workplace. But few threw major punches, and Labor declined to prosecute the argument in the televised question time.

The reason comes back to a familiar cliche – the “Canberra bubble”, where everyone knows everyone else’s business.

They also know everyone else’s dirty laundry. And they assume someone knows which of theirs stinks, too.

In other words, the reason almost nobody is talking publicly about the Four Corners story is one of mutually assured destruction.

It’s about the unspoken truce between politicians – and, it must be said, between them and some journalists – that tawdry personal dealings are not to be lobbed around, lest there be a ‘hit job’ on you in return.

Morrison shouldn't deflect attn frm Porter BUT he's SPOT ON. There are older men in (or recently in) Press Gallery (or cover #auspol2020 ) who need to take a good, hard look at themselves. As do newsroom bosses. There's a reason this all stays in Canberra bubble #fourcorners

“We all work very intensely with each other. This environment is referred to as a ‘bubble’ for a reason,” Greens senator Sarah Hanson-Young said.

It’s tricky to know, without hard-slog, painstaking, months-long investigative journalism (like the Four Corners report) how much is true and how much is Canberra hyperbole. But several stories are hot on people’s lips.

There’s gossip about which politicians had pre-COVID penchants for staying out late and getting loose at bars; about which MPs are secretly having affairs; about which pollie’s angry spouse took to their clothes with various destructive household tools.

There’s whispers of which politicos are “handsy”, of infamous encounters at Midwinter Balls or Christmas parties that still flush the cheeks of famous faces.

These are, to be clear, rumours.

They are the stories journalists work on for months, making delicate inquiries across wide swathes of contacts, but – just as in any reporting round in business, sport or crime – they are stories that often cannot be substantiated, where sources won’t go on the record or deny it happened.

Maybe the journalists inside the “bubble” – and their bosses – weigh up whether the story is worth burning a relationship. Or maybe they are just waiting for the right time.

That was talked about for months over drinks in Canberra before it ended up on the front page of the Tele ( yes, the same Murdoch-owned paper where Ms Campion used to work).

Whatever the press pack is up to, you can bet politicians and their staff have been digging up just as much dirt and stockpiling it for a rainy day.

Don’t be surprised if this is why we heard various veiled warning shots from politicians this week.

“If anyone who has had any experience around this place thinks that issues in the past are limited to one side of politics, well, honestly?” Scott Morrison said on Tuesday, arching an eyebrow at a press conference.

“The others, who all we know on both sides of politics are there,” Barnaby Joyce said.

Liberal senator Amanda Stoker used Senate estimates on Monday to ask whether the ABC had looked into the Labor Party or Greens.

She said, without giving more evidence, that “we know there have been concerns” about “senior members of the Labor Party”, and claimed “massive allegations of the cover up of sexual misconduct” in the Greens.

She said she stood by the claims she made, even in the face of Mr Porter’s denials. She also said it was “extremely hard” for her to come forward, but urged others to do the same.

“There were women who still work in this building, and are not able to speak up,” she said on Wednesday.

“It is up to us as parliamentarians, those who are in positions of privilege, to actually set a better standard. So yes it’s awkward. But it’s time for a bit of courage.

Bad behaviour festers when there’s no sunlight. Just because someone else has bad behaviour that hasn’t been called out, doesn’t mean somebody else’s should remain silent.’’