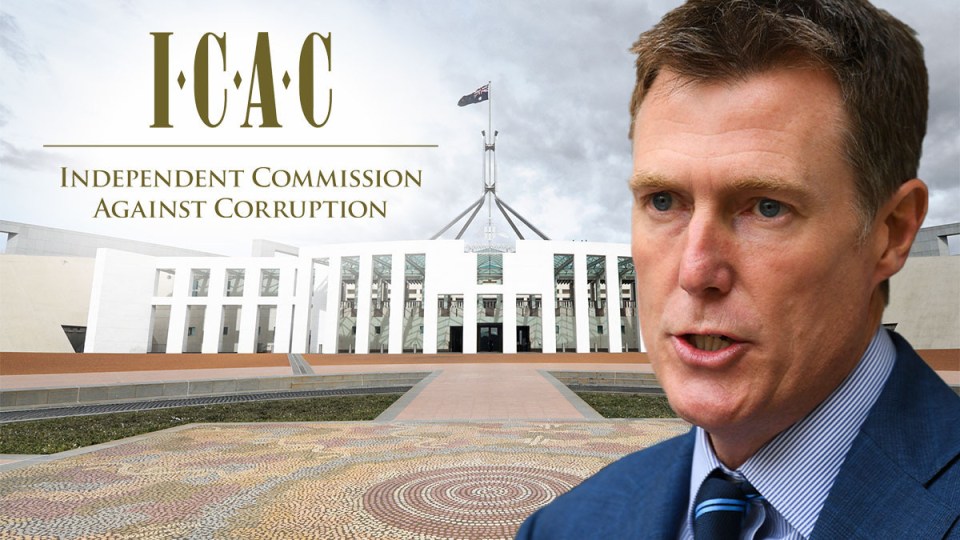 A long-delayed federal anti-corruption body has been slammed as “toothless” and “compromised” by critics, with claims the new commission wouldn’t even be able to investigate the ‘sports rorts’ funding scandal or the Leppington Triangle airport land blowout.

“Christian Porter’s proposal would be the weakest watchdog in the country,” said Han Aulby, executive director of the Centre for Public Integrity.

The federal body could investigate politicians and their staff, the public sector, universities, intelligence services and the armed forces.

But, it’s already under criticism for proposing secret private hearings and imposing a high barrier for political conduct to be scrutinised.

Mr Porter said the CIC would have “greater investigatory powers than a royal commission”, like being able to tap phones, conduct search warrants, and compel witnesses to testify.

However, the branch of the CIC dealing with the public service and politicians would not be able to launch inquiries on its own, and would instead have to wait for referrals from government departments.

It would also only be able to probe matters that constitute a crime, not just general corruption, which may not always be criminal.

Ms Aulby and the Centre for Public Integrity have long pushed for a federal corruption body.

She said the government’s proposal was inadequate, and that its requirement for conduct to meet criminal thresholds meant numerous corruption scandals would escape scrutiny.

“They’re setting that bar so high for investigations that they wouldn’t be able to investigate ‘sports rorts’ or the Western Sydney airport deal,” Ms Aulby told The New Daily.

“The commission would have to ask ‘where’s the crime?’ before it even got started … it needs evidence of a criminal offence.”

Mr Porter addressed this line of criticism in an earlier press conference, saying the CIC would have a list of 143 offences it could investigate.

“In my observation, they cover every conceivable type of serious criminal conduct that one might label corruption,” the Attorney-General said.

Ms Aulby also voiced concerns about the lack of public hearings for politicians in the style of NSW’s ICAC, and no avenues for direct whistleblowing to the commission.

“We see public hearings as being crucial. New witnesses come forward, new evidence is borne out, and corruption is exposed to the public. Corruption flourishes in dark corners, and sunlight really is the best disinfectant,” Ms Aulby said.

“They also need to accept allegations from the public, and anyone in government or public service.

“Corruption is the kind of investigation where you want the most info you can, and that often comes from people who may not feel safe going through formal processes, so being able to make anonymous complaints is really important.”

Pauline Wright, president of the Law Council of Australia, was “pleased that the government has finally released” the draft legislation, but called for the definition of ‘corrupt’ behaviour to be applied equally across the public service and law enforcement investigations.

“There should be an alignment of powers between the divisions and the same broad definition of ‘corrupt conduct’ should apply.”

Ms Wright also said although “hearings should generally be conducted in private”, the CIC should have “discretion” in whether to make hearings public.

Labor, the Greens and members of the parliamentary crossbench have wanted a federal integrity commission to mirror the likes of NSW’s ICAC and Western Australia’s CCC.

But with the government’s proposed model falling short of the expectations of those parties, it’s unclear which politicians outside the Coalition will vote for it.

The New Daily understands Labor is unhappy about the bill but is still considering its position.

“I find it shocking to suggest that you would establish a national integrity commission and deprive it of the possibility of holding hearings in public,” Mr Dreyfus said.

He said the government would have to “persuade crossbench members of the Senate” to support it.

He signalled Labor may not get behind the bill, saying that a “proper integrity commission” may have to “wait for the election of a Labor government”.

Greens leader Adam Bandt called the proposal a “sham” and a “toothless tiger”.

“The public sector branch won’t be able to start investigations under its own steam, so whistleblowers will need to jump through hoops to warn about political corruption,” he claimed.

Independent MP Helen Haines, who last week introduced a “consensus” bill of her own for an integrity commission, said she welcomed the government introducing the bill.

However, she was “deeply alarmed” at its limitations, including the private hearings and high bar for investigation.

“These deficiencies will cause alarm among millions of decent Australians, and many members of the government’s own party room,” she said.

“A model like this would be ineffectual against the scandals we have seen over the last fortnight. Australians deserve better than that.”