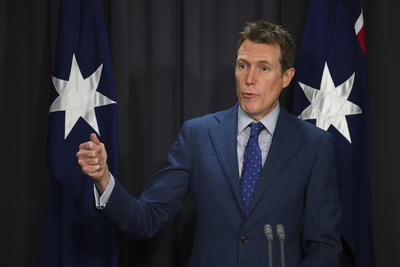 Attorney-General Christian Porter speaks to the media during a press conference at Parliament House on Monday afternoon. Photo: AAP

The Morrison government’s long-awaited plans for a national anti-corruption body have finally been detailed, almost a year after the draft was delivered to the Attorney-General.

To be known as the Commonwealth Integrity Commission (CIC), the federal body will be able to investigate politicians and their staff, as well as universities, public sector organisations, intelligence services and the armed forces.

But, it’s already under criticism for proposing secret private hearings and imposing a high barrier for political conduct to be scrutinised. Labor claims the model is “weak, secretive and compromised”.

Attorney-General Christian Porter detailed the CIC framework on Monday, calling the framework “complicated” because it would capture the conduct of more than 150,000 public servants and many thousands more people employed in government employment.

The CIC would have “greater investigatory powers than a Royal Commission”, Mr Porter said.

He said this would include the power to tap phones, carry out search warrants, compel witnesses to testify at hearings and force people to surrender documents and other evidence.

The government was handed an exposure draft for the commission in December last year, it was revealed in Senate estimates last month.

At the same time, Prime Minister Scott Morrison defended the delay by invoking the COVID pandemic, saying it was “complex legislation and it requires detailed consultation”.

“I was not going to have one public servant diverted from the task of focusing on our whole-of-government approach to dealing with this pandemic,” he thundered in Parliament.

On Monday, just two weeks after saying he couldn’t divert public servants to the task, the Attorney-General said the process was now underway, but would be out for public consultation until February.

This means it could be mid-2021 or later before the CIC actually comes into force.

The CIC will be rolled out in a multi-stage process.

First, the existing Australian Commission for Law Enforcement Integrity (ACLEI), which monitors police and Border Force among others, will be expanded to watch over four extra agencies from January.

Following the full establishment of the CIC, the ACLEI will be “subsumed” into that body, Mr Porter said, as the law enforcement arm of the integrity commission.

A separate public sector branch of the CIC will focus on public sector, intelligence agency and Australian Defence Force employees; the staff of federal judicial officers; and some higher education providers and research bodies.

But of most interest to many will be the CIC’s power to investigate parliamentarians and their staff, and how the proposal places stricter limits on when such investigations can commence.

Mr Porter said there would be a higher bar to clear before complaints about the political class could be referred to the CIC or investigations commenced, partly because he claimed political opponents would turn such a process into a “circus”.

CIC hearings investigating politicians and public servants would also not be made public.

“The very heightened environment we exist in at the Commonwealth level means there is a tendency for some to refer for motives that aren’t entirely pure,” the Attorney-General claimed.

“The sort of things we have seen, for instance, with the shadow Attorney-General having cited 10 unsuccessful referrals of a Coalition member for Parliament for criminal investigation. That is just ridiculous and you don’t want to have things turn into a circus.”

Mr Porter said the government had aimed to ensure that accused people are “not denied procedural fairness and are not subjected to trial by allegation”, claiming state-based integrity commissions – like the CCC in Western Australia and ICAC in NSW – had made “significant mistakes”.

Mark Dreyfus, Labor’s shadow attorney-general, said the opposition had not been consulted on the proposal.

“The Morrison government has proposed a weak, secretive and compromised model clearly designed to allow the government to pretend it is acting to address corruption while ensuring it could never be held accountable for its multiple scandals,” he complained.

Mr Dreyfus claimed the commission would not be able to begin investigations of its own volition, and require referral from other bodies. He also criticised the lack of public hearings for politicians and public servants.

Greens leader Adam Bandt called the proposal a “sham” and a “toothless tiger”.

“The Liberals’ model is limited only to serious criminal conduct, meaning many of the misconduct scandals involving current and former government MPs would not be caught,” he claimed.

“It won’t hold public hearings, so politicians could escape scrutiny for years.

“The public sector branch won’t be able to start investigations under its own steam, so whistleblowers will need to jump through hoops to warn about political corruption.”