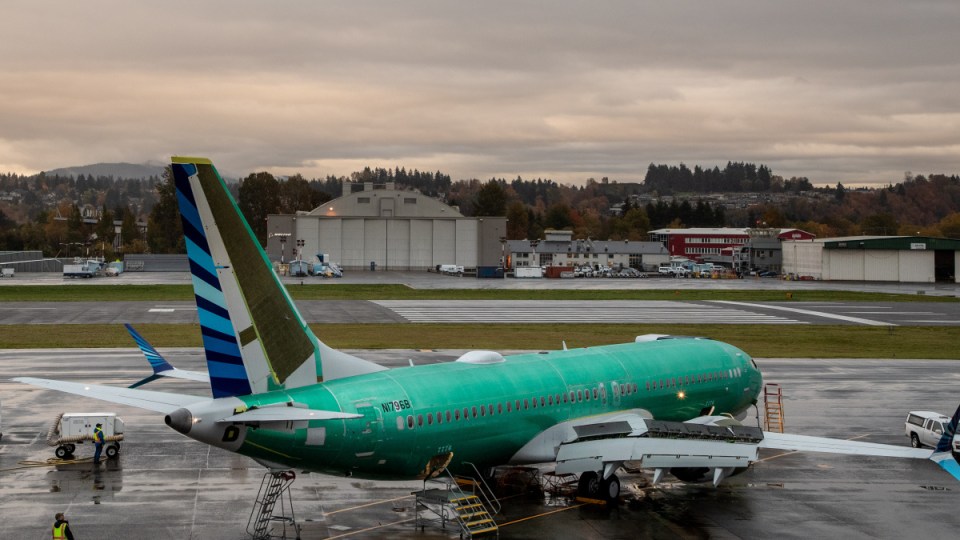 Boeing's 737 MAX planes have been hit by drama after drama in the past 12 months. Photo: Getty

Boeing’s attempt to rebuild trust in its scandal-plagued 737 MAX has been thrown off course, with a pilots union voicing fears the firm is rushing the plane’s return.

On Thursday, the union president of Southwest Airlines’ pilots said the airline – Boeing’s biggest customer – should consider buying planes from another manufacturer.

“Boeing will never, and should not ever, be given the benefit of the doubt again,” union boss Jon Weaks wrote in a letter to members.

“The combination of arrogance, ignorance and greed should and will haunt Boeing for eternity.

“I strongly concur with Southwest exploring obtaining a different and perhaps non-Boeing aircraft for the best interest of all our futures.”

Boeing announced on Monday that it expected regulators to unground the 737 MAX in coming weeks, clearing the path for it to return to commercial flight schedules by March.

“We expect the MAX to be certified, airworthiness directive issued, ungrounded in mid-December. We expect pilot training requirements to be approved in January,” Boeing spokesman Gordon Johndroe said.

“Our airline customers will need more time to return their fleets to service and to train all 737 pilots, therefore they have announced schedule updates into March.”

The 737 MAX jets have been involved in two fatal crashes that killed everyone on board – the Lion Air crash off Indonesia in October 2018 that killed 189 people, and the Ethiopian Airlines crash near Addis Ababa in March that killed 157 people.

Monash University aviation expert and co-author of Up in the Air Greg Bamber said that he would not feel safe flying on the 737 MAX under current circumstances.

“I would not be getting on one at the moment,” Professor Bamber said.

“Boeing has made several earlier forecasts of the planes being back in the air very soon which it did not keep.

“I think there’s a lot of ground still to cover.”

“They are saying that the first people that will be flying on these planes will be Boeing executives and airline executives, and they will be on a big push to try to reassure the public and on a charm offensive to convince people to trust Boeing again,” he said.

The first is the technical issue of fixing the fault with the 737 MAX planes – the MCAS system, which was designed to prevent the plane stalling, but was not disclosed to pilots – and led to the Lion Air and Ethiopian Air tragedies.

Boeing misled  both “the airlines it was selling these planes to”, and the pilots, by not disclosing the new MCAS system and putting it in their manuals, Professor Bamber said.

“Boeing did this for commercial reasons, putting profits before people. They wanted to pretend that the Boeing 737 MAX 8 was not a new aircraft on a new system, and they wanted to persuade airlines to buy it on the grounds that pilots wouldn’t need new training,” he said.

“Just fixing the technical issue is one thing … but once that’s done and the regulators are convinced that has been done, it is then going to be necessary to try to fix the trust deficit and retrain the pilots and convince the travelling public that the planes are safe.”

The second issue is that the Federal Aviation Authority (FAA) in the United States allowed Boeing to act with little oversight and  “almost self-regulate”, Professor Bamber said.

“The FAA In the US is also to some extent at fault here,” he said.

“The primary fault is with Boeing, but the American authority had been captured by Boeing. The FAA allowed Boeing to almost self-regulate.”

Boeing has a “major challenge ahead”, Professor Bamber said.

“Even if the FAA does reverse the grounding its likely that other regulators in Australia, Asia, and Europe, won’t necessarily follow suit any longer.

“They will want to take time to do their own investigations because they now have a trust deficit with the FAA.”

Australia’s Civil Aviation and Safety Authority banned the 737 MAX from flying in and out of Australia in March.

A CASA spokesman told The New Daily it does not expect the MAX to be flying this year.

Once the FAA gives Boeing the all-clear, CASA will “review all the information and actions and reach a decision for Australia”, the spokesman said.

“We will take into account the views of other leading aviation nations such as Canada, Europe, South Africa, New Zealand.”

Problems not confined to 737 MAX

Boeing’s troubles are not confined to the 737 MAX, with Qantas revealing it found cracks in the ‘pickle forks’ of three of its Boeing 737 planes in late October.

Qantas said it would ground 33 of its Boeing 737s to check for further cracks, defying calls from the aviation engineers’ union to ground all 75.

Boeing revealed that up to 50 of the 737 Next Generation planes – a precursor to the 737 MAX – had been grounded around the world because of the issue.

A whistleblower has also come forward with serious qualms about the safety of the firm’s flagship Dreamliner aircraft.

Earlier this month, Boeing quality control manager John Barnet said he feared passengers on the 787 Dreamliner could be left without oxygen if the cabin were to suffer a sudden decompression.

Boeing has denied the claims.

Aviation academic: I wouldn’t ride a 737 MAX no matter what Boeing says