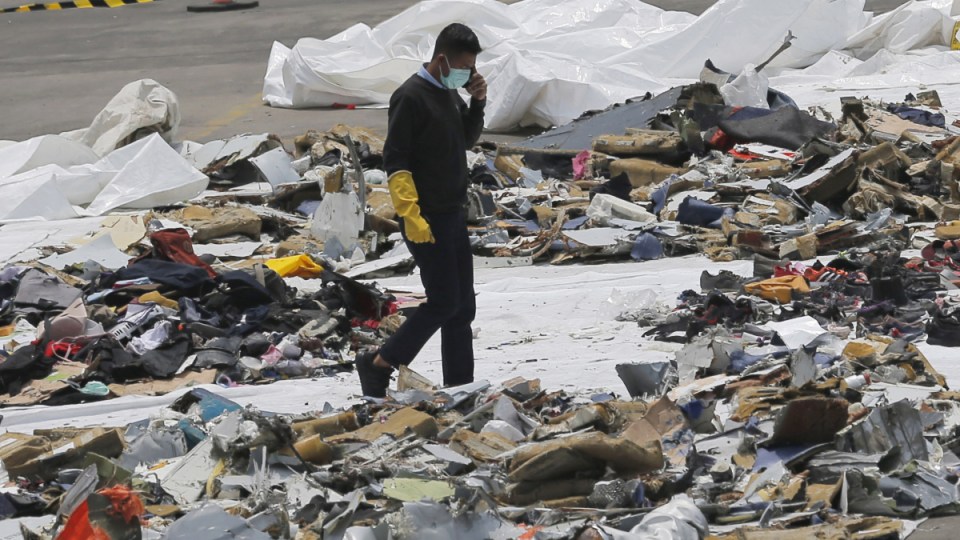 International aviation authorities imposed restrictions on Indonesian carriers after a series of accidents, including the Lion Air catastrophe. Photo: AAP

According to slides presented on Wednesday to the families of the 189 people on board  who died, “deficiencies” in the flight crew’s communication and manual control of the aircraft contributed to the crash, as did alerts and distractions in the cockpit.

In a briefing ahead of the release of their final report, they said contributing factors to the crash of Lion Air’s new Boeing jet included incorrect assumptions about how the anti-stall stall device functioned and how pilots would react.

Reliance on a single angle-of-attack sensor made the system more vulnerable to failure, while the sensor on the plane that crashed had been miscalibrated during an earlier repair, investigators said.

The Seattle Times newspaper received an advance copy of a final report on the crash of the Lion Air jet on October 29 last year.

The final report said the first officer was unfamiliar with procedures and in training had shown issues handling the aircraft, according to the Seattle Times.

A Boeing spokeswoman declined to comment on the briefing, saying, “as the report hasn’t been officially released by the authorities, it is premature for us to comment on its contents”.

Boeing announced on Thursday that it expects its fleet of 737 Max aircraft to be back in the air before the end of the year, saying it “continues to work with the FAA and global civil aviation authorities to complete remaining steps toward certification and readiness for return to service”, it revealed in its third-quarter report on Wednesday (Chicago time).

Boeing said regulators in each country would determine how and when the planes returned to service. But the company had assumed that regulatory approval would begin in the fourth quarter of 2019 and build from there.

The construction rate of the Max aircraft – which has been hit hard by the planes’ global grounding – would build from 42 a month to 57 by late 2020, the Seattle manufacturer said.

Less than five months after the Lion Air accident, an Ethiopian Airlines 737 MAX crashed on March 10, leading to a global grounding of the model and sparking a corporate crisis at Boeing, the world’s biggest plane maker.

Indonesian investigators told the families that a mix of factors contributed to the crash, including mechanical and design issues and a lack of documentation about how systems would behave.

It also found that a critical sensor providing data to an anti-stall system was faulty and that there were strong indications that it was not tested during installation by Lion Air maintenance staff, the newspaper reported.

In the report, Indonesian regulators recommended a redesign of an anti-stall system known as MCAS that automatically pushed the plane’s nose down, leaving pilots fighting for control.

Boeing has already said it would remake the system and provide more information about it in pilot manuals.

The final report will be released publicly on Friday.

Mark Lindquist, of the Hermann Law Group, representing 46 victims’ families, said they had reached an agreement on four cases.

“Negotiations are ongoing. Our goals are justice for the victims, accountability from Boeing and safer skies for everyone – whether we get there by settlement or by trial,” he told CNN.

Mr Lindquist said the negotiating process started with victims who were single and childless and will move on to victims who have spouses and children.

They also represented four families in the Ethiopian Airlines crash which killed 157 passengers and crew on board.