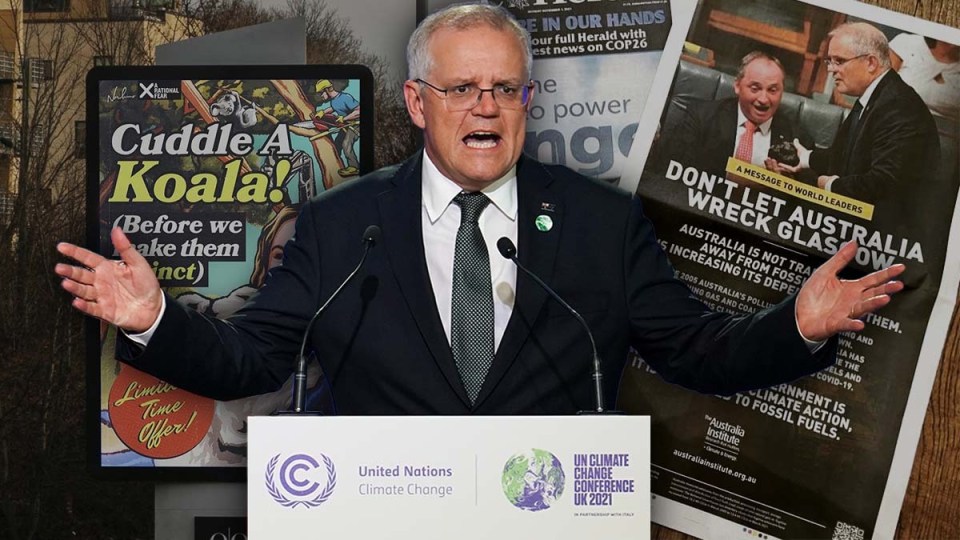 As the COP26 climate summit comes to a close, the Australian government has little to show for its attendance other than a seemingly battered and bruised global reputation.

Australia sat out of agreements to cut methane emissions, coal use and deforestation, despite many of the world’s largest nations signing on to such commitments.

Because of this, environmentalists, activists and artists around the world condemned and embarrassed Australia for the duration of the Glasgow summit.

Australia has long drawn international attention over its climate track record, but this year’s summit took on a much more dramatic turn.

Here’s how it unfolded.

Former UN climate chief Christiana Figueres, who was one of the key architects of the 2015 Paris Agreement, slammed Australia’s approach to climate change early on at COP26.

“I struggle to find an adjective that is politically correct [for Australia],” Ms Figueres told the ABC.

She said her opinion of Australia’s approach had not changed despite Mr Morrison’s last-minute commitment to achieve net-zero emissions by 2050.

“What Australia continues to do, which in my book is nothing other than to dig into dark holes of poison for itself and for the planet, is completely irresponsible,” Ms Figueres, who now hosts a podcast called Outrage and Optimism, said.

“I think it’s still suicidal because it is.”

On Friday afternoon – 12 days after Ms Figueres’ remarks – the Australian government released the full details of its net-zero plan, which turned out to rely on as-of-yet undiscovered technologies to account for 15 per cent of the country’s planned emissions reductions by 2050.

One of the biggest stunts of COP26 came when comedian Dan Ilic raised money for billboards to shame the Australian government in Glasgow (…and Times Square, and Australia).

His initial goal was to raise $12,500 for a single billboard, but Australians quickly pitched in almost $230,000 through crowdfunding.

In Glasgow, Ilic managed to snag a billboard on the highway leading to the COP26 venue, as well as two others around the city.

However it was the Times Square stunt that caused the biggest stir.

“I feel like COP26 is a very noisy place to cut through, and that Times Square was the master stroke to propel Morrison to COP at the very least,” Mr Ilic told The New Daily.

A day before the highly-anticipated Times Square billboard went live, and amid mounting public pressure, Mr Morrison made a snap announcement that he would attend the summit in Glasgow.

Each ad featured a photo from the time Mr Morrison brought a lump of coal into Parliament.

The Australia Institute paid for the advertisements, the first of which appeared in Italian business newspaper Il Sole 24 Ore  on October 30, coinciding with the G20 summit in Rome.

Then, as COP26 kicked off right after, the same advertisement was published in Scottish newspapers The Sunday Post and The Herald on consecutive days.

The Climate Council also took out its own full-page advertisement in British newspaper The Times on November 8.

It reminded the world of Australia’s catastrophic bushfire season right before the pandemic, which has come to symbolise the extreme weather events associated with climate change.

At the conference itself, bushfire survivors and firefighters gatecrashed the Australian pavilion.

They staged their own press conference, fronted by Jo Dodds, president of the Bushfire Survivors for Climate Action group.

“We’re a country that’s feeling the brunt of climate change so savagely, in so many ways,” Ms Dodds told the world on November 8.

“So we’re here outside the Australian pavilion to hold our government to account, and to stand with the rest of the world and survivors from so many different regions, experiencing so many different effects of climate change.”

A day earlier, Ms Dodds said in a video on Twitter that she was being watched closely by guards and was made to feel unwelcome at the pavilion.

“Particularly if it’s going to cost money in the short term, the temptation is to deny the problem and pretend it’s not there,” the veteran broadcaster and conservationist said.

“But every month that passes, it becomes more and more incontrovertible, the changes to the planet that we are responsible for that are having these devastating effects.”

Mr Morrison responded by saying he’s “not embarrassed at all” by the criticism.