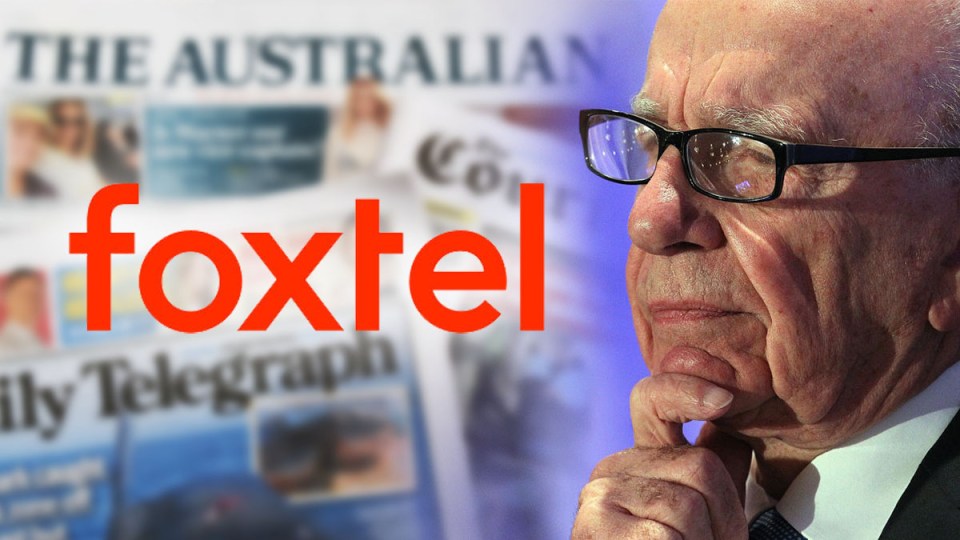 Rupert Murdoch is pondering the float of Foxtel.

Foxtel is struggling to build its new streaming business in a world where competitors are breathing down its neck and media is rapidly changing.

It may force the legacy media business into a sharemarket float or sale, after Foxtel’s parent, Rupert Murdoch’s News Corp – which owns 65 per cent of the subscription TV business along with Telstra – put the business under review on Friday.

But that was accompanied by some long awaited good news.

That was a welcome improvement on write-downs and earnings declines in recent years – but it is not as good as it looks.

Revenues in the business only grew 3 per cent, and even that was made up of a 3 per cent favourable move in foreign exchanges. In real terms that means revenues were flat.

Foxtel is caught in a pincer movement driven by change subscription models. Low cost streaming is where the action is and viewers are moving away from the expense of old style cable connections.

The move has been under way for a while, but it is building momentum.

A year ago, new streaming services Kayo and Binge accounted for 28 per cent of Foxtel viewers and by September 30 it was 51 per cent.

The danger is that the streaming world is far lower margin than cable.

“It’s becoming a utility product with so many competitors going into that market,” said independent telecommunications analyst Paul Budde.

So far the shift hasn’t been as painful as it may become, with revenue per viewer actually increasing 4 per cent to $82 in the quarter.

Some of that would be the result of commercial Foxtel customers such as hotels and venues beginning to pay up again after being closed during the pandemic.

However that is likely to reduce when the effects of the latest lockdowns again are felt.

And the move towards streaming brings with it relentless pressure.

Subscriptions to Binge and Kayo can be obtained for as little as $10 and $15 a month respectively, while a full service cable subscription might be $100 or more.

Even the boost in earnings in the last quarter comes with a big question mark.

“EBITDA [earnings before interest, tax and depreciation] went up by $US36 million ($48.66 million) in the quarter, but we are told that was primarily driven by a $US34 million in lower sports programming rights and production costs,” said independent analyst Peter Cox.

Even if those economies can be maintained, Foxtel will be faced with the problem of getting earnings growth from the shift to streaming.

“There is Disney, Netflix, Apple, Stan and Amazon in the main market. Then in the next tier there is Paramount, CBS and the three Foxtels along with the five free-to-air networks with their catch-up services,” Mr Cox said.

Of those, only Netflix and Stan are really dependent on streaming, but Stan has the improving Nine network attached to it, while Netflix is a global giant.

The others are either an addendum to major businesses (like Amazon’s Prime), are part of movie empires, or are part of a commercial TV world that has turned the corner on profitability. 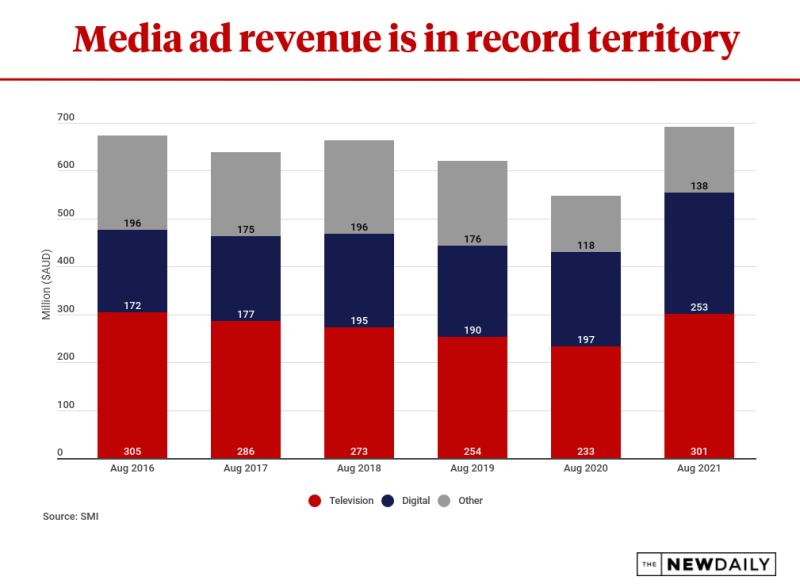 As the above chart from Standard Media Index shows, TV advertising is at levels not seen for five years, and if intricacies around Olympics broadcasting are taken into account, it is at a record.

“TV bookings up 29 per cent to break through the $300m mark in August for the first time since the Rio Olympics in 2016,” she said.

Given that the Rio Olympics in 2016 were held across all of August and
while the Tokyo Olympics were spread between July and August, “the 2021 August TV result is at a record level,’’ Ms Ractliffe said.

That means the TV companies will start to yield more from advertising on their second line and catch-up channels, boosting their competitive abilities.

Foxtel will be restricted to its subscription revenues because of its business model sees it carry less ads.

So successful were the Olympics that it wrote back into its assets $21 million it had taken as a provision over earlier fears the event wouldn’t be a success.

Channel Nine, owner of Foxtel competitor Stan, saw TV revenues jump 12 per cent to $1.5 billion and earnings up 73 per cent to $324.1 billion.

Seven also this week moved to take over regional TV player Prime – no relation to Amazon’s Prime – for $122 million.

What all that means for Foxtel is its competition in the streaming market is heating up, with competitors having more cash to spend.

That could spur News and Telstra to go through with the sale of Foxtel in a stock market float currently under consideration.

Foxtel may float as the competition increases in streaming