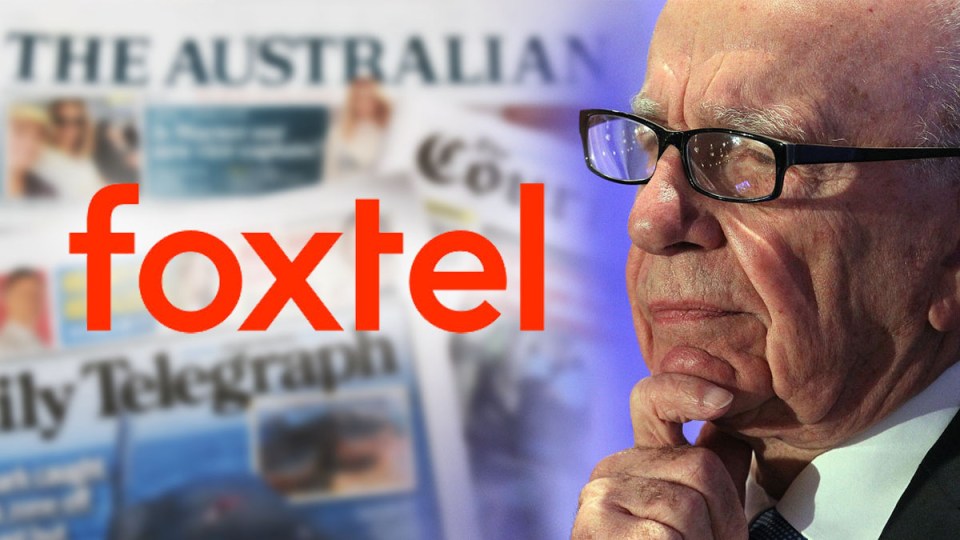 Rupert Murdoch is pondering the future for Foxtel. Photo: The New Daily

The question many analysts are asking about Foxtel is simple: How long will the Murdoch media conglomerate News Corp continue to fund it?

The pay-TV provider’s yearly performance was revealed on Friday as part of News Corp’s (its 65 per cent owner) result for the financial year.

Foxtel’s pre-tax earnings came through at $US323 million ($448 million), a fall of 15 per cent. It continues a decreasing trend in recent years, but the trouble for Foxtel really shows up in its viewership figures.

“That’s one of the biggest drops in the last four or five years,” said telecommunications analyst Paul Budde.

Dow Jones, the publisher of the Wall Street Journal, was the only bright spot on the News Corp balance sheet finishing the year up 13 per cent.

Other newspaper segments have been on the decline for a long time. 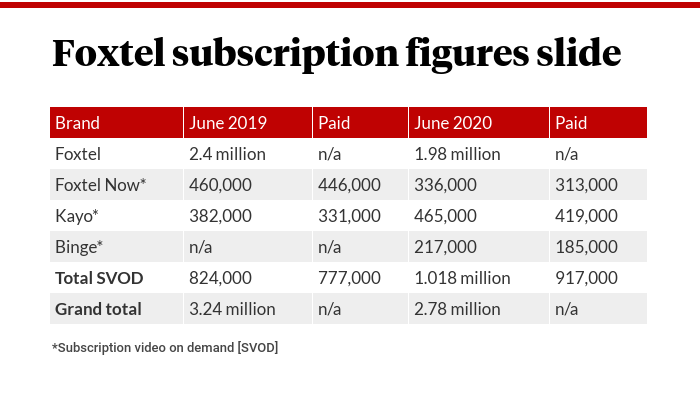 Under the old but lucrative pay-TV model, Foxtel has been bleeding subscribers – down 18 per cent to 1.98 million last financial year.

Meanwhile, the number of people joining its subscription video on demand (SVOD) channels, like Binge, jumped 23.5 per cent to 1.018 million.

However, while SVOD (which includes providers like Netflix and Stan) may be the way of the future, the dollars and cents are yet to add up.

A Foxtel subscriber can pay as much as $109 a month, with the lowest-priced package putting Australians back $49 a month. But its SVOD offerings are significantly cheaper – between $10 and $25 monthly.

Even within the SVOD space, subscribers are moving from the $25 per month Foxtel Now to the newly launched $10 a month cheapie, Binge.

Not only is Binge cheaper, it doesn’t carry advertisements which restricts another potential revenue stream for the struggling TV provider.

“Revenue per user has dropped from $100 in the old days to $78 now and it will continue to fall.”

While Foxtel ad revenue figures are no longer provided to the market, they are likely to be in the $300 million region, analysts say.

So Foxtel is going to have a big margin squeeze as more of its business migrates to SVOD and away from big subscription prices and ad revenue. With only  a million SVOD customers its also going to be a small fry in a world where Netflix has 11.8 million subscribers and Stan 3.3 million.

“You need to have five to seven million users to be a player in this market,” Mr Budde said.

“It’s gone from being a monopoly, and it’s going into a market where it’s going to be struggling. That’s a very hard cultural shift to make,” Mr Budde said. 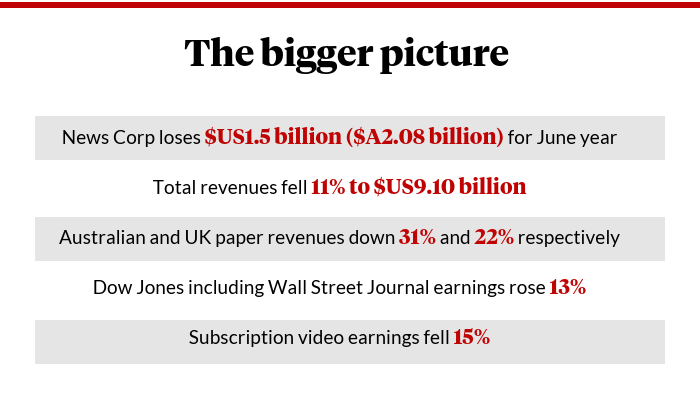 Foxtel was originally shuffled into News Corp along with the newspaper products when Rupert Murdoch’s empire was split back in 2013.

It was a move intended to bulk up revenues as print income shrank.

Earlier this year, News cut its holding value by $1.47 billion after years of decline following an extra $200 million in debt funding.

“No-one else would provide the money so Rupert Murdoch had to provide it. It’s a declining service and it remains to be seen how long Murdoch wants to support it,” Mr Budde said.

Adding to Foxtel’s concerns has been the cancellation of major sport leagues around the world because of the coronavirus pandemic. Foxtel’s sport packages have been a key driver of the business since day one.

Go your own way

Foxtel and Australia’s free-to-air networks are pressuring sports codes to reduce the cost of content. But they may not have significant leverage.

“If you say ‘we’ll pay twice the price’ you can get the content, but if you want to strike a hard deal it can be a problem,” said Mr Budde.

“The codes are likely to make their own arrangements. Manchester United has its own streaming service so there are threats from all directions,” Mr Budde said.

There are ructions in the Murdoch family with James Murdoch last week resigning from the News Corp board saying he didn’t like the political direction of its papers.

However, Mr Cox says there could be more to it than that.

“He voted with his feet and I’m sure he had problems with the business strategy and he saw this (growing problems at Foxtel) coming as well,” Mr Cox said.

Foxtel in the outhouse: Things are bad for Murdoch’s pay-TV operation … and about to get worse