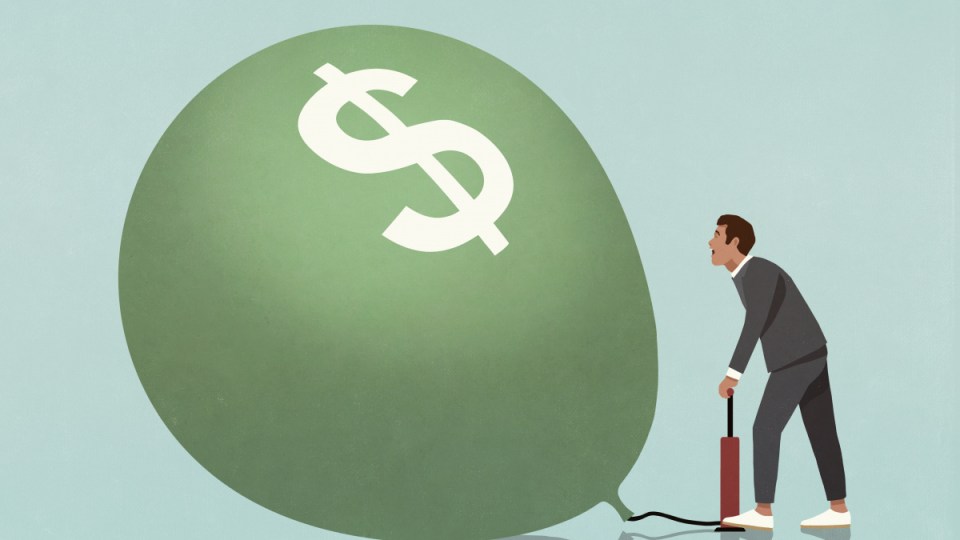 Investors around the world are worried record amounts of government stimulus will flow through to higher consumer prices as the global economy recovers from COVID-19.

The fears have sparked major sell-offs in international sharemarkets and were kicked into overdrive when annual inflation in the US last week hit its highest level since 2008.

But why should you care?

Well, if the inflation fears are well founded and wages continue to stagnate then your living standards will go backwards.

In the US, the Consumer Price Index – which measures the average change over time in prices paid by urban consumers for a set basket of goods and services – jumped 4.2 per cent in April as the economy rebounded from the COVID recession.

This is what generated plenty of headlines in the financial press earlier this month and what triggered big falls in the US sharemarket.

Among other things, used car and truck prices jumped 21 per cent while overall energy prices soared 25 per cent.

Such figures are undoubtedly high, but a significant part of the double-digit increases can be attributed to so-called “base effects”.

In this instance, what that means is the annual price increases are unusually high because today’s prices are being compared to the low prices experienced during the pandemic lockdowns last year, which unsurprisingly drove down inflation.

These base effects help explain why members of the Federal Reserve and Reserve Bank of Australia are largely unconcerned about the higher-than-expected inflation readings. They believe price spikes will be temporary.

As to what’s happening with the cost of living in Australia, the latest Consumer Price Index here showed annual headline inflation rose just 1.1 per cent in March.

But Reserve Bank governor Philip Lowe has already pre-empted a big jump in the June quarter – to above 3 per cent – as the annual figures then would be making comparisons to an economic quarter that included “COVID-19-related price reductions” such as the federal government’s free childcare policy.

The ABS will release CPI data for the June quarter on July 28.

Ok, so will my living standards go backwards?

In a narrow sense, living standards will go backwards if prices rise faster than wages – which is unfortunately what the federal government is forecasting to happen over the next four years.

But at the moment the Reserve Bank is not worried about the prospect of runaway inflation – Dr Lowe says unemployment will likely have to fall to 4 per cent or lower before there’s a sustained pickup in wages and prices.

In addition to the base effects mentioned earlier, Dr Oliver told The New Daily a lot of the recent run-up in inflation could be explained by supply bottlenecks rather than big jumps in underlying demand.

“The basic problem there is that the pandemic wrong-footed many businesses,” he said.

“Last year they thought demand would collapse, so they cut their orders and production was cut. Then it turned out that demand held up a lot better than expected, and rebounded faster and particularly for goods – and that put pressure on suppliers.”

In industries such as used cars and construction, it has been something of a perfect storm. Just as supply chains were squeezed, people locked in their homes spent money usually reserved for overseas holidays and eating out on home renovations and consumer goods – pushing up prices.

“So I think the central banks are right to see this [inflation] as transitory,” Dr Oliver said.

“Higher prices will bring forward an increase in production, so industrial production will catch up. And at the same time, we’ll probably see a rotation in consumer spending back towards services, and so the pressure on goods prices will start to subside.”

Practically, this means if you can hold off on renovating your lounge or snapping up a second-hand ute for a few months, then your hip pocket will likely thank you.

Investors are worried about inflation, and selling shares in some companies, because they believe that higher prices will squeeze the profit margins of the companies in which they invest.

On top of this, stronger-than-expected inflation would encourage central banks to raise interest rates to prevent the economy from overheating, which would also put pressure on profit margins.

As for the ‘real economy’, an interest rate hike would result in higher repayments for home owners on variable-rate loans, and potentially weigh on consumer spending as a result.

But it would also make it easier for renters to save a deposit, as it would slow down house price growth and allow banks to increase the interest paid on their deposits.

Inflation fears are spooking financial markets. Here’s what it means for you