For many, the word ‘inflation’ screams higher grocery bills and lower living standards – something to be avoided at all costs.

Such an opinion is understandable, given inflation refers to the rate at which average prices increase over time.

But, in moderation, inflation is actually very helpful for the economy.

The best way to illustrate this point is to explain what happens when an economy has too much or too little, according to University of Melbourne senior research fellow Sam Tsiaplias.

“This is why the Reserve Bank has an inflation target of 2-3 per cent,” he said.

“That’s what we’re comfortable with. It’s a stability measure, insofar as it helps the economy to run more smoothly.”

With that in mind, here are some ways slightly higher inflation can help the economy.

Higher inflation boosts household spending as consumers are less likely to delay purchases when they believe prices are rising.

This, in turn, leads to higher wages. Not only because businesses can afford higher salaries when their products and services are selling for higher prices, but also because workers can demand more when the supply of labour is limited.

(Of course, firms are unlikely to pass on the full benefit of those higher prices. But higher inflation makes pay rises more likely.) 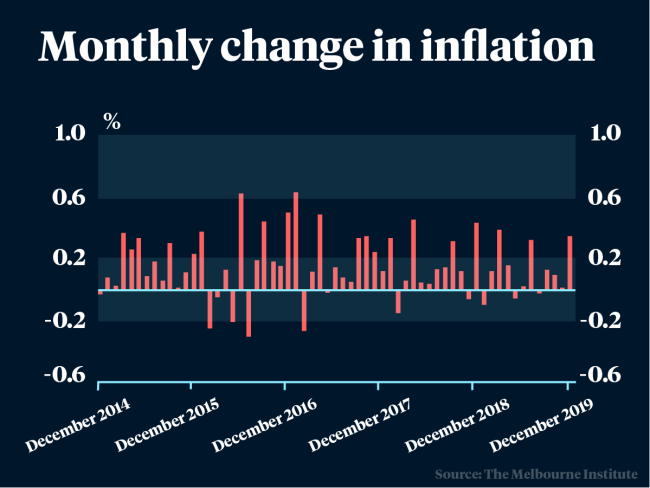 As Dr Tsiaplias points out, the reverse is true when inflation is low.

Low inflation points to a lack of demand in the economy, which means that people are buying fewer products and services.

In such an environment, the economy slows and businesses make less money.

This means low inflation often keeps a lid on wages, as businesses struggle to pay workers more when their products are selling for lower prices.

2. Inflation erodes the value of debt

According to NAB, for a brief period last year, Australians owed $2.02 for every dollar they earned in income.

That figure has since dropped, after the majority of Australians used the recent tax and interest rate cuts to pay down debt.

But borrowers would have even more to cheer about if inflation ticked up slightly.

Because while inflation makes goods and services more expensive, it also erodes the value of debt by reducing the value of money (owed).

3. It reduces the burden of public debt

The Australian government had a net debt of of $373.6 billion, or 19.2 per cent of GDP at the end of the last financial year.

While that’s relatively low compared to other countries, a higher inflation rate would help the government pay it off much quicker, as the money owed would be of less value. 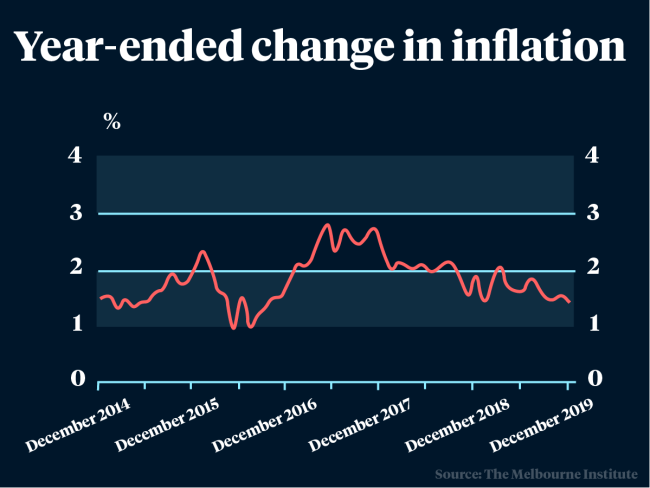 Inflation targeting reduces the degree of uncertainty in a world that is intrinsically uncertain.

It makes it easier for businesses to estimate future costs and put together financial plans, as they can reasonably expect prices to grow between 2 and 3 per cent every year.

It guides people’s investment decisions by providing a benchmark from which to assess returns.

And even if the RBA occasionally misses its target, businesses can expect and plan for the bank to hit the mark again later down the track.

Where to now for inflation?

The Reserve Bank has only managed to hit its inflation target for two out of the past 12 quarters.

Dr Tsiaplias said this is partly because the rate of unemployment which triggers strong wages growth is much lower than it used to be, and partly because “consumer uncertainty is resulting in patchy demand”.

Most economists would argue that greater government spending would help to boost inflation. As would RBA governor Philip Lowe.