Given jobs ads are falling and construction activity slowing, the bank’s decision on Tuesday attracted strong criticism from some quarters.

Critics said the RBA was so far from its employment and inflation targets that more rate cuts were essential.

But others said interest rates were so close to zero that further rate cuts would do little for the economy other than boost property prices.

The only way out of our economic rut is to give people a pay rise, they said, and that requires boosting productivity, not dropping interest rates.

What is productivity, and why does it matter?

Productivity is the amount of output produced per hour of work.

It has a big effect on our living standards, as companies only pay workers more if they produce more.

But for the past five years it has been growing at an average rate of just 1.1 per cent a year, and last financial year it went backwards for the first time since the Australian Bureau of Statistics began keeping records in 1994.

Lifting it to 1.5 per cent a year would give workers an extra $3000 a year, according to Treasurer Josh Frydenberg.

Why is Australia’s productivity growth so low?

Australia’s productivity growth is falling for a number of reasons, but most of it has to do with technology.

While the world is awash with promising ideas and inventions, companies are struggling to put them to good use.

“If you think about the post-World War Two era, you had massive capital investments that had labour interacting with machines more, which made labour way more productive,” University of New South Wales economics professor Richard Holden told The New Daily.

“Then you had the interstate highway system and [other forms of] large-scale economic development … and then, in the ’80s and ’90s, you had the computer revolution, which saw office workers become remarkably more productive.

“Since 2010, we’ve got the smartphone, but what’s actually made people more productive? That’s a little bit harder to say.”

Dr Holden said there was a chance the problem could solve itself in a few years’ time.

The next wave of technologies could soon reach a point where firms can easily integrate them into workplaces, he said.

But a lack of new disruptors might drag out the process.

According to Treasury, the rate of entry for employing firms has fallen from 14 per cent in the early 2000s to 11 per cent in recent years.

UTS Business School industry professor Warren Hogan told The New Daily this was slowing down the rate of technological adoption in Australia, and consequently dragging down productivity.

“My experience is the adoption of technology within a large corporation is very cumbersome and slow,” he said.

“And the most effective way to bring new technologies into an industry is through new players.” 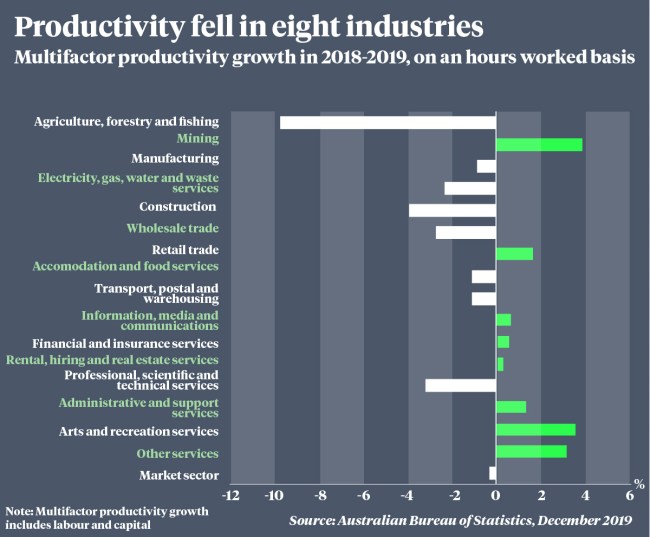 It’s hard for businesses to imagine what the economy will look like next year, as no one knows how Brexit or the US-China trade war will unfold.

And that’s causing them to delay major investments.

“There’s also a role for easy money in this – very low interest rates and falling interest rates are keeping unproductive firms in business, which is holding productivity down across the economy,” Professor Hogan said.

“And it could also be that we’re seeing a rollback of the free-market system.

“Since the financial crisis, we’ve had a shift in politics towards populism, which is obviously showing up clearly in Europe and the US, and that leads to the policy agenda going away from liberalisation and the freeing up of markets towards protectionism and regulation.” 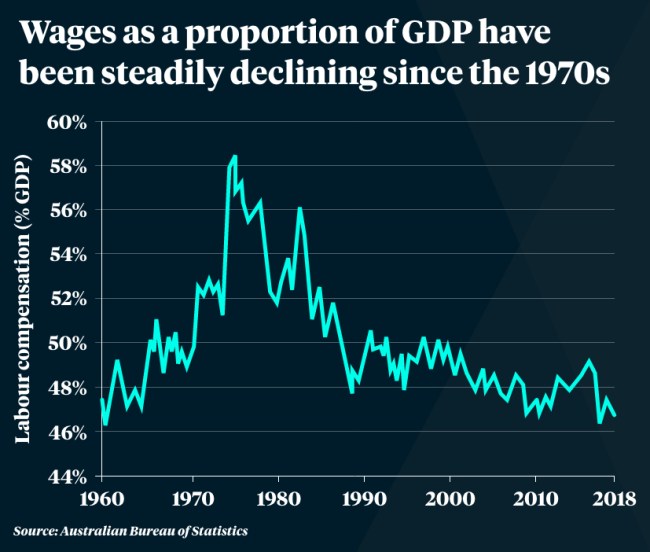 As the chart above shows, labour’s share of GDP has been steadily declining since the 1970s, because employers are keeping a greater share of profits for themselves.

What can governments do to boost productivity?

Increasing productivity is about working more efficiently, by removing speed bumps in the economy and helping workers maximise their potential.

Encouraging more startups to enter the economy would be a start, Professor Hogan said.

As would more tax incentives for businesses investing in new technologies.

“The key point here is there is no role for monetary policy to play in the long-term wellbeing of nations. None whatsoever,” he said.

“And skills and training is an incredibly important part of it,” he added.

“It’s really important that people have the right skills to be productive in the workforce.”