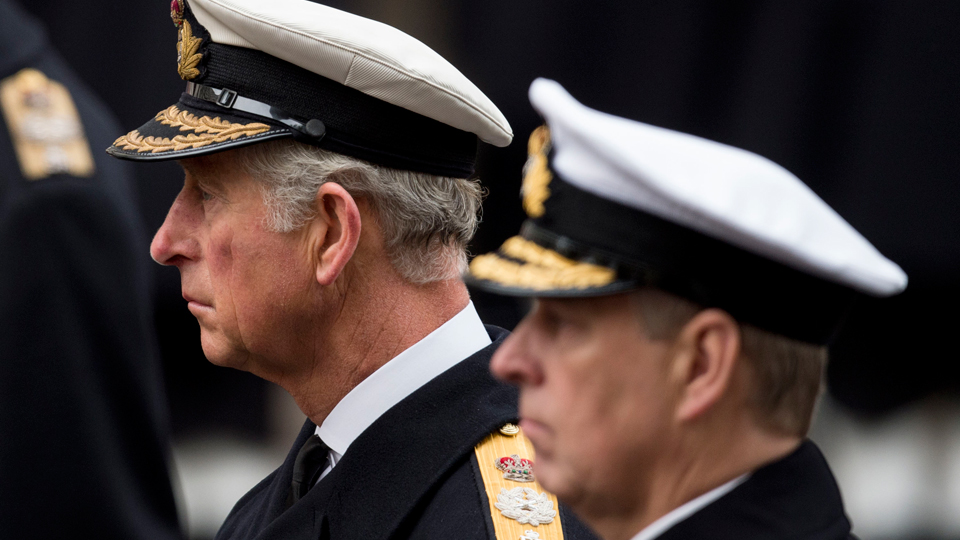 Prince Charles and Prince Andrew at a Remembrance Day service in London in 2014. Photo: Getty

Spurred by the disaster engulfing Prince Andrew, his brother and heir to the throne Prince Charles is planning to become the “Shadow King” and take over leadership of the royal family, according to reports.

Charles, 71, was overseas on an official tour when Andrew’s disastrous BBC interview about his friendship with Jeffrey Epstein aired. Back in the UK, he headed straight to Sandringham, the Queen’s Norfolk estate.

He is said to have met there with his father Prince Philip, 97, to discuss the Andrew situation.

Charles was at the centre of the coterie of senior royals, including the Queen and Prince William, who effectively sacked the Duke of York, 59, from royal duties for the “foreseeable future”.

He is said to have insisted “Andrew has to go … it is the only way” and will reportedly summon his brother to a showdown this week.

“He’ll take a tough line with Andrew. He’ll let rip but he will have a strategy,” a friend told Vanity Fair.

Thank you India, New Zealand and the Solomon Islands for hosting The Prince of Wales and The Duchess of Cornwall on this year’s Autumn Tour! #RoyalVisitIndia 🇮🇳 #RoyalVisitNZ 🇳🇿 #RoyalVisitSI 🇸🇧

Charles’ key role in Andrew’s unceremonious exit has fanned speculation he will take the reins of power in 2021 when his mother turns 95, the age Prince Philip bowed out of public life.

She may use the occasion to make her son Prince Regent, according to The Sun.

“The scandal surrounding Andrew and Epstein gave Charles an opportunity to step in to show that he can run The Firm,” a royals source told the newspaper.

“No one is bigger than the institution of the royal family. Charles recognised that and acted decisively. This was the moment when Charles stepped up as Prince Regent, the Shadow King.’”

“I understand the Queen has given the matter considerable thought and believes that, if she is still alive at 95, she will seriously consider passing the reign to Charles,” royals correspondent Robert Jobson said.

Fresh fuel will be added to the Andrew scandal on December 3 (Australian time) when the BBC’s Panorama runs an interview with the duke’s accuser Virginia Roberts Giuffre.

In the show, Giuffre reiterates claims she was forced to have sex three times with Andrew in 2001, when she was 17.

“He knows what happened, I know what happened and there’s only one of us telling the truth,” she said in a 20-second trailer released by the BBC on November 29.

Meanwhile, masseuse Monique Giannelloni told the Daily Mail she was allowed “unvetted” into Buckingham Palace for a “nude treatment” with the duke in 2000.

She said she was asked only for her car registration number before being cleared to drive in.

“It was so easy to get into the palace and it troubled me because I could have been anyone,” Giannelloni, 55, said.

She claimed she was referred to Andrew by another client, Ghislaine Maxwell. The British socialite is the alleged ‘procurer’ behind Epstein’s trafficking of young women.

Like her friend Andrew, Maxwell has denied all allegations against her but has gone to ground since Epstein’s August suicide.

The British and US media has doggedly tried to track down Maxwell, with Daily.Mail.com executive editor Candace Trunzo telling Vanity Fair, “She’s the one missing link.”

The Duke of York met Maxwell at the palace in June, according to The Sun.

The Daily Mail said she was in London then for a car rally in which she shared a road trip to Monaco with Nettie Mason, wife of Pink Floyd’s Nick Mason.

Maxwell was absent from official photos for the event, just as she has proved so capable of avoiding media that The Sun has pledged a reward of nearly $20,000 to anyone leading them to Maxwell.

Twitter has a ‘whereisghislaine’ hashtag, and sightings have placed Maxwell in the Caribbean and a Los Angeles burger joint.

Trunzo said the Mail is following up leads: “She’s our Waldo, and we’re going to find her.”

Oh, brother! Andrew’s deepening scandal has Charles closer to taking over the throne