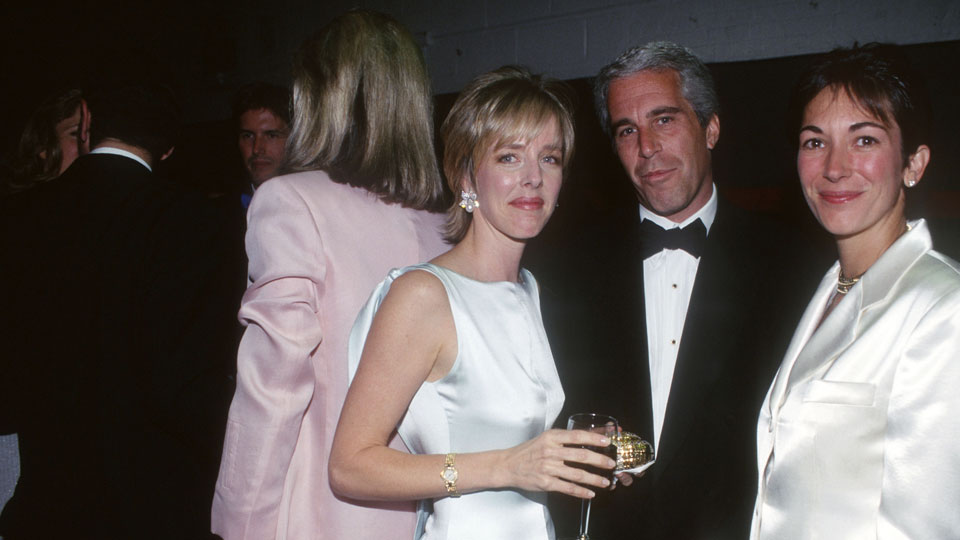 When Bill Clinton walked daughter Chelsea down the aisle in 2010, Ghislaine Maxwell beamed from a prime position.

Ms Maxwell was a friend of John F Kennedy Jr, hit up the 2014 Vanity Fair Oscars party in 2014 and was snapped with royalty and the Trumps.

For two decades, the Paris-born, Oxford-educated trust-fund daughter of media baron Robert Maxwell was also at the centre of the Jeffrey Epstein pedophile sex scandal, according to civil court documents.

But the investigation into his proclivities is continuing, and reports say  Ms Maxwell may be the next target.

Trouble is, there’s speculation those in charge have lost track of her.

“Authorities have had trouble” locating her, according to the Washington Post.

After telling friends she planned to vanish, she hasn’t been seen for “weeks” by neighbours at her homes in London and Salisbury, said the Telegraph.

“Those who know her say it’s possible she’s as much of a Houdini as Epstein,” reported Vanity Fair.

“Both of them liked having secrets and the way those secrets kept people off balance.”

According to accusers, the British socialite was Epstein’s protector and madam, and played a pivotal role in recruiting and grooming underage girls for the disgraced late financier.

As The Washington Post put it, Epstein and Ms Maxwell joined forces to build what authorities and a growing list of women “described as a sex-trafficking operation … to provide Epstein with three young girls a day”.

The scandal resurfaced last week when more than 1200 legal documents were released by a Manhattan court.

They relate to a 2015 defamation case in which Virginia Roberts Giuffre, who says she was Epstein’s teenage “sex slave”, sued Ms Maxwell after she called her a liar.

On the eve of the 2017 trial the case was settled out of court.

Ms Maxwell has not been charged with any crime, and in 2011 called accusations against her “abhorrent”.

Ms Giuffre said in a 2015 deposition that Ms Maxwell recruited her in 2000 when she was a 16-year-old locker-room attendant at Donald Trump’s Florida Mar-a-Lago resort.

At her first meeting with Epstein, Ms Giuffre said in a deposition, Ms Maxwell “instructed me to take off my clothes and to give oral sex to Jeffrey Epstein”.

I'm sure they're more, but these are the main ones that'll be spread around.

First picture features Ghislaine Maxwell, his supposed accomplice. Probably can assume it was happening when that picture taken since she's present. #Wildin pic.twitter.com/uEkWiyhrNy

Other women alleged in depositions and affidavits that Ms Maxwell instructed them to massage Epstein to orgasm and that she took part in sexual assaults on them.

Epstein replied “Fifth,” referring to his Fifth Amendment protection against self-incrimination, when he was asked in a deposition about Maxwell’s role in procuring girls for him.

The allegations against Ms Maxwell, who sold her five-storey Manhattan townhouse in 2017 for $22 million, are a far cry from her life as a socialite.

Raised in a 53-room mansion near Oxford, she was the namesake for the yacht, Lady Ghislaine, from which her former MP and publisher father Robert fatally fell overboard off the Canary Islands in 1991.

Her status and bank balance depleted after her late father’s death – more than $500 million was revealed to be missing from his companies’ pension funds, according to The Guardian –  Ms Maxwell moved to New York and sold real estate.

Less than a year later, she met Epstein and became his “guide to a heady world of celebrity, wealth, power and royalty”, said the Post.

At first lovers, the couple travelled the globe on Epstein’s private jet.

He had the money and she the connections, which she used to introduce him to Mr Clinton and Prince Andrew.

A 2002 New York magazine profile of Epstein said she “lent a little pizzaz” to the billionaire. He called her his “best friend” in a 2003 Vanity Fair profile.

But after his 2008 sexual abuse conviction, she started to slip out of his orbit.

“Ghislaine thought this was all dead and buried when the case was settled in 2017,” a friend was quoted as telling the Telegraph.

“So she was knocked for six when the Epstein stuff raised its ugly head again.

“She told everyone that it was just a rehash of the same old nonsense.
She said that she planned to totally disappear and not say anything.

“Since then people haven’t heard anything from her at all.”