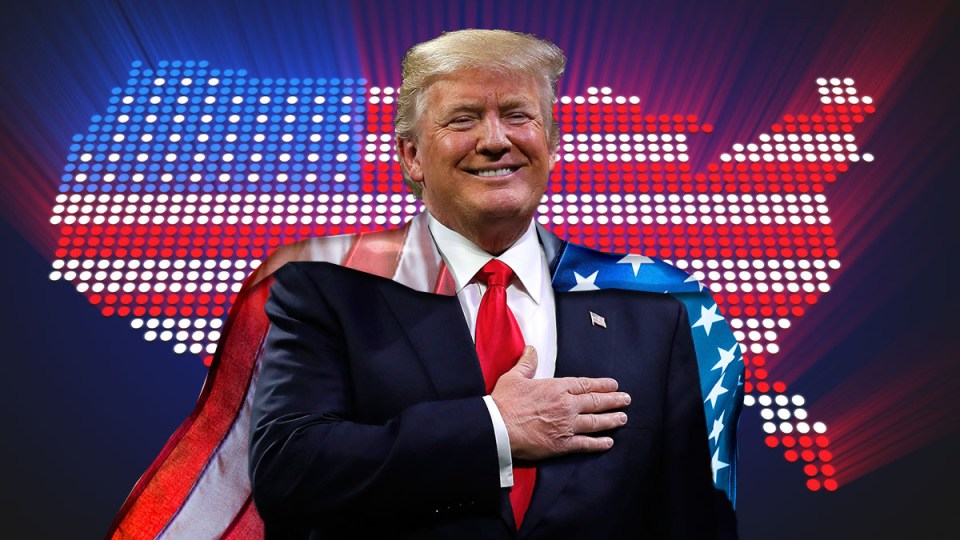 Donald Trump's true contribution to the US is still a matter of debate.

Before becoming President of the United States in 2016, Donald Trump promised he would “Make America great again”.

Four years have passed since Mr Trump entered the Oval Office and began steering the US in a dramatic new direction.

In the eyes of his supporters, he’s the first president in history to actually follow through on his campaign promises.

But does that mean Mr Trump has “made America great”?

It depends on who you ask.

Since 2017, Mr Trump has been talking up plans to overhaul America’s healthcare system and replace it with his own “less expensive” version.

This includes repealing the Affordable Care Act, known as Obamacare, which made health care more affordable and expanded coverage to include Americans with pre-existing conditions, like cancer.

But so far, all Mr Trump has done is remove one section of the law as part of a large tax-cut package in December last year.

He also hasn’t provided any detail on what his own healthcare proposal would look like, nor when it would come into effect.

At a time when America’s new daily coronavirus infections are surging well beyond 60,000, affordable access to health care has never been more important.

Already, more than 231,000 Americans have died from the virus – a devastating record that Mr Trump has consistently downplayed.

Among Mr Trump’s key 2016 promises was that he would supercharge the American economy like never before.

And to an extent, he succeeded.

During his first three years as president, the US enjoyed higher employment and a GDP growth rate of three per cent.

But has Mr Trump really created the “best economy in history”, as he likes to claim?

“Trump likes to say he’s grown the best economy in history, but even pre-pandemic, he hasn’t delivered a growth rate or GDP growth rate better than (his predecessor, Barack) Obama,” she said.

“The first three years of job growth were less than Obama’s last three years – and Obama was coming off a global financial crisis.”

Ms Hoggard, a non-resident fellow at the University of Sydney’s United States Study Centre (USSC), said it was true that unemployment reached a record low of 3.5 per cent in December.

But again, she said unemployment nearly got down to 3.5 per cent under Mr Obama anyway.

“They’re good numbers – 3.5 per cent is a good low unemployment number, but that was pre-pandemic, and even then it was not overly impressive,” she said.

From the very beginning, Mr Trump made it clear his ‘America First’ approach to foreign policy would prioritise the needs of the US above all else.

And that’s exactly what he did – but whether or not that’s a good thing is up for debate.

During his first year as president, Mr Trump snubbed some of America’s most loyal allies by withdrawing from several major international agreements.

Among them was the Trans-Pacific Partnership, an important free trade agreement with 12 countries, excluding China, that promised to boost US exports and economic growth.

Mr Trump also withdrew from the Paris Agreement, a UN-led initiative aimed at strengthening the global response to climate change.

And in 2018, he pulled out of the 2015 nuclear deal with Iran, undermining hard-won efforts to contain Iran’s increasingly threatening nuclear program.

But what did all this actually achieve?

To the average working American, not much.

“Trump’s ‘America First’, isolationist approach to foreign policy and trade may sound good to Americans who feel like they’ve lost their jobs to workers overseas – but we haven’t really seen jobs coming back to his America,” Ms Hoggard said.

One notable achievement for which Mr Trump can take credit is not starting a war with any new countries, said Dr David Smith, a lecturer in American politics and foreign policy at the USSC.

“That’s significant because just about any other president before him opened up a new theatre of war – even Obama with Libya,” he said.

“His actions might lead to war with Iran, but during his presidency so far, no new wars.”

Dr Smith added the president had also managed to persuade members of NATO, an intergovernmental military alliance, to start paying a higher percentage of their GDP on defence – something that Mr Obama had long complained about.

“It’s one of those rare examples where Trump got other countries to change their behaviour,” he said.

Contrary to Mr Trump’s claims that America has the “cleanest water” and “cleanest air”, the President has “completely failed on climate change”, Ms Hoggard said.

“In fact, he’s taken the country backwards in addressing climate change,” she said, pointing to his swift withdrawal from the Paris Agreement.

“One of the first things he did was sign an executive order that said for every new regulation introduced, two must be removed, as part of his economic plan.

“That agenda has removed limits to greenhouse gas emissions, and lifted bans on oil and gas exploration on public land and on the coastal waters off the east coast of America.”