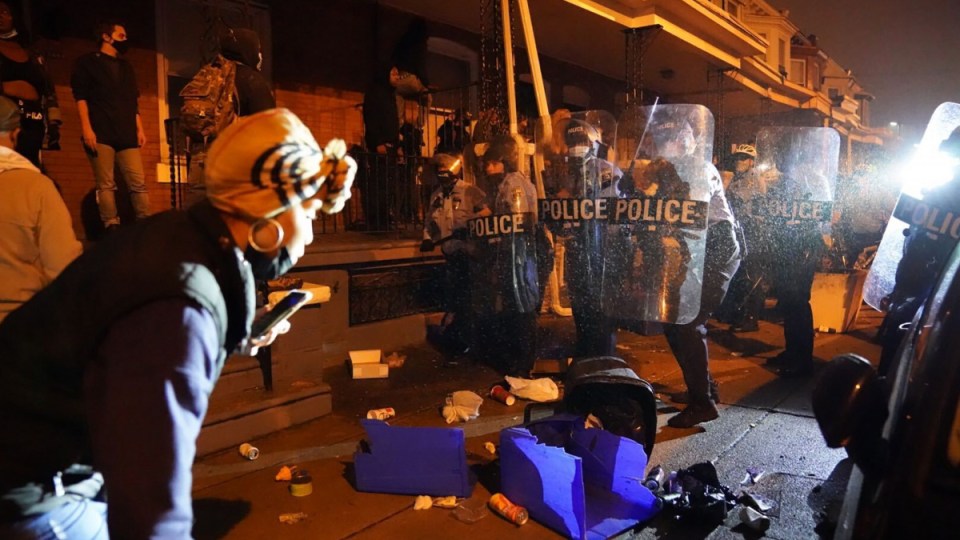 Violence in Philadelphia after Monday's fatal police shooting of a black man.

There is rioting and violence in the the US city of Philadelphia after police fatally shot a black man armed with his knife.

The man was reportedly shot in front of his family after a confrontation in a neighbourhood in the city’s west on Monday afternoon (local time).

Later, the anger turned into a violent standoff at a local police headquarters. Several officers were injured by bricks or other objects hurled from the crowd.

Eight days out from the US election on November 3, there were reports of shops being looted and at least one police vehicle was set on fire.

The Philadelphia Inquirer said the trouble began when officers responded to reports of a man armed with a knife.

In a video posted to social media, the man – identified by local media as 27-year-old Walter Wallace – can be seen apparently walking towards the police. He is restrained by a woman, reportedly his mother, but does not stop.

The man is still some distance from the officers when the camera shot swings out of view. In that moment, police fire at him.

Philadelphia police said Mr Wallace was repeatedly told to stop, and was shot multiple times when he did not.

“Officers ordered him several times to drop the weapon,” Philadelphia Police Sergeant Eric Gripp said. “He did not do so.”

“The cameras were activated,” he said.

“We should have a lot of video, along with eye witness statements.”