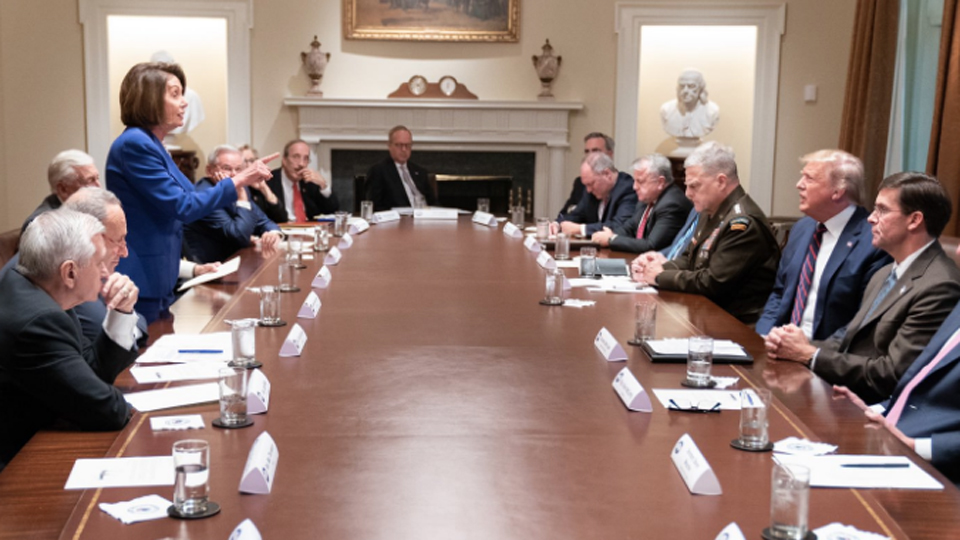 The US House of Representatives has voted overwhelmingly to condemn President Donald Trump’s decision to pull US forces out of Syria – apparently setting the scene for a monumental row between Mr Trump and Democrat politicians.

Dozens of Mr Trump’s fellow Republicans joined the majority Democrats in favour of the resolution, which was passed 354-60 on Wednesday.

It came as House Speaker Nancy Pelosi said a Democratic leaders’ White House meeting was cut short after Mr Trump had a “meltdown” over the vote.

The President reportedly kicked off the meeting bragging about his “nasty” letter to Turkish President Recep Tayyip Erdogan. In the letter, he warned Mr Erdogan not to be “slaughtering” the Kurds.

Mr Trump later went on to boast of capturing ISIS before Ms Pelosi warned him that Russia had always wanted a “foothold in the Middle East” – and it now had one.

From there, according to Associated Press, the mood at the meeting only worsened.

Mr Trump to Mr Pelosi: “I hate ISIS more than you do.”

Democratic Senator Chuck Schumer: “Is your plan to rely on the Syrians and the Turks?”

Mr Trump: “Our plan is to keep the American people safe.”

According to Senator Schumer, Mr Trump then called Ms Pelosi “a third-rate politician”.

As they did, Mr Trump said, “Goodbye, we’ll see you at the polls.”

“I think that vote – the size of the vote, more than two-one of the Republicans voted to oppose what the President did – probably got to the President. Because he was shaken up by it,” Ms Pelosi said afterwards.

“That’s why we couldn’t continue in the meeting – because he was just not relating to the reality of it.”

For his part, Mr Trump aimed the same meltdown accusation at Ms Pelosi.

For their part, Republican leaders said Ms Pelosi’s behaviour was “unbecoming” and criticised her for “storming out”.

Wednesday’s vote underscored overwhelming unhappiness in Congress over Mr Trump’s action, which many politicians view as abandoning Kurdish fighters who had been fighting alongside Americans to defeat Islamic State militants.

They also angrily denounced the release from prison of Islamic State fighters since Turkey’s offensive began a week ago.

“That was a betrayal of our partners. It was a gift to Russia, a gift to Iran, a gift to ISIS and a gift to [Syrian President Bashar al-]Assad,” said Representative Eliot Engel, the Democratic chairman of the House Foreign Affairs Committee, who sponsored the resolution.

The resolution backed by the House opposes Mr Trump’s decision to remove the troops and calls on his administration to present a “clear and specific” plan for the enduring defeat of ISIS.

It also calls on Turkish President Tayyip Erdogan to immediately end the offensive, seeks continued US support for Syrian Kurdish communities through humanitarian support, and also calls on the US to work to ensure that Turkey’s military acts with restraint.

Also on Wednesday, Mr Trump released an extraordinary letter he had sent to Mr Erdogan, calling on the Turkish president to “work out a good deal!” and warning him not to be a “tough guy” or “fool”.

President Donald Trump wrote a letter to Turkish leader Recep Tayyip Erdogan calling on him to “work out a good deal!” and warning him not to be a “tough guy” or “fool” https://t.co/aIkWHzt7Cz

In the letter, dated October 9 (two days after the leaders spoke on the phone), Mr Trump warned he could destroy Turkey’s economy if the situation in Syria is not contained and resolved in a humane way.

Meanwhile, the Turkish government has said Mr Erdogan will meet Russian President Vladimir Putin in the Black Sea city of Sochi on October 22.

It gave no further details. Both countries have troops in Syria, where Turkey has launched a cross-border offensive targeting Kurdish YPG fighters.

Russian forces are supporting Syrian army troops moving into north-east Syria after the US started a military withdrawal.