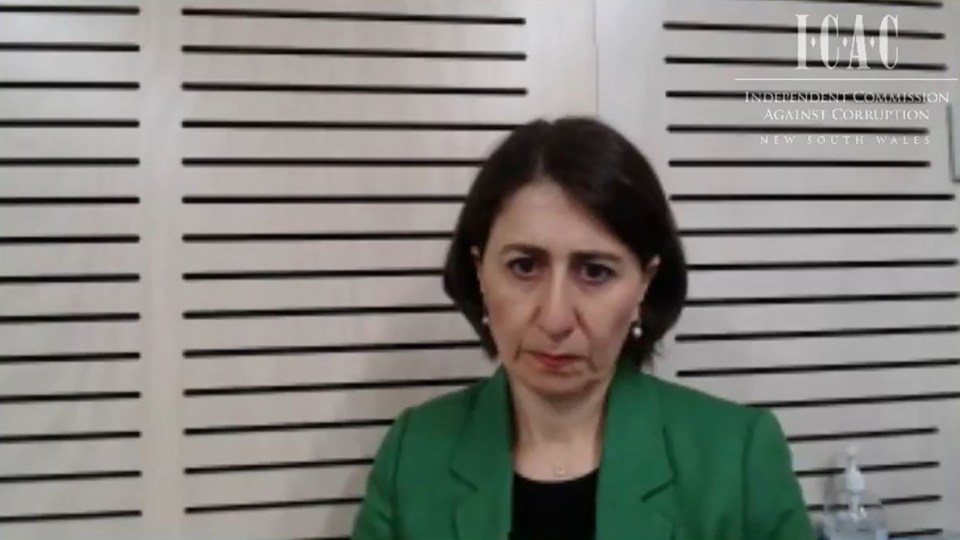 Ex-NSW Premier Gladys Berejiklian is standing by her decision to keep a relationship secret. Photo: AAP

If she had her time again, Gladys Berejiklian would still not disclose her secret relationship with disgraced former MP Liberal Daryl Maguire.

Appearing before the corruption inquiry that forced her to resign as NSW premier on October 1, Ms Berejiklian on Friday got the opportunity to address the allegations against her.

The NSW Independent Commission Against Corruption is investigating how that secret relationship might have affected how Ms Berejiklian – as treasurer and later premier – dealt with projects lobbied for by the former member for Wagga Wagga.

Mr Maguire was the one originally under the microscope of the ICAC last year, for allegedly using his position as an MP to gain a financial benefit for himself.

“If you were able to have your time again, would you disclose your close personal relationship with Mr Maguire to your ministerial colleagues or any of them?” counsel assisting the commission Scott Robertson asked Ms Berejiklian on Friday.

“I didn’t feel it was of sufficient standing or sufficient significance in order to do that,” she said.

Her response came despite Ms Berejiklian agreeing with the way Mr Maguire characterised their relationship while giving evidence on Thursday.

He said the pair loved each other, contemplated marriage and discussed having a child.

She was shown a message, sent to Mr Maguire in April 2018, calling him her “family”.

“I would regard my best friends … as part of my family. That is a very loose term,” she said.

“I regarded him as part of my love circle – part of the people that I strongly cared for – but I wouldn’t have put him in the same category as my parents or my sisters.”

On Thursday, Ms Berejiklian lost a bid to have ICAC hear details of the relationship in private, the denial of which, her lawyer argued, would bring the former premier “humiliation and harm”.

Assistant Commissioner Ruth McColl denied the request, saying the matter was in the public interest.

Also on Thursday, Mr Maguire conceded the couple’s relationship gave him greater access to Ms Berejiklian than other MPs, and in private he “encouraged” her to take a close interest in projects he was lobbying for.

The public hearing has focused on two grants – a $5.5 million upgrade to the Wagga Wagga Clay Target Club, and a $20.5 million plan to build a recital hall for the Riverina Conservatorium of Music.

Mr Maguire denied he ever explicitly asked his partner to intervene but conceded he would sometimes communicate with her in the hope she would.

Ms Berejiklian denies any wrongdoing. On Friday, she said all her colleagues would say her door was always open to them.

“I would say that all of my colleagues had equal access to me,” she said.

“When parliament was sitting, they would drop into my office and push their projects. They would ring me, they would text me.”

Ms Berejiklian agreed public money should be spent in the public interest, and probity over those decisions is crucial.

“I have lived my life by that,” she said.

“Every day that I have spent in public life, I have done so to the best of my ability, putting the public interest first, basing all of my decisions on what I regarded as the interest of the community or the state or the government.

“I stand by that so strongly.”

‘I had feelings’ for Maguire: Gladys Berejiklian