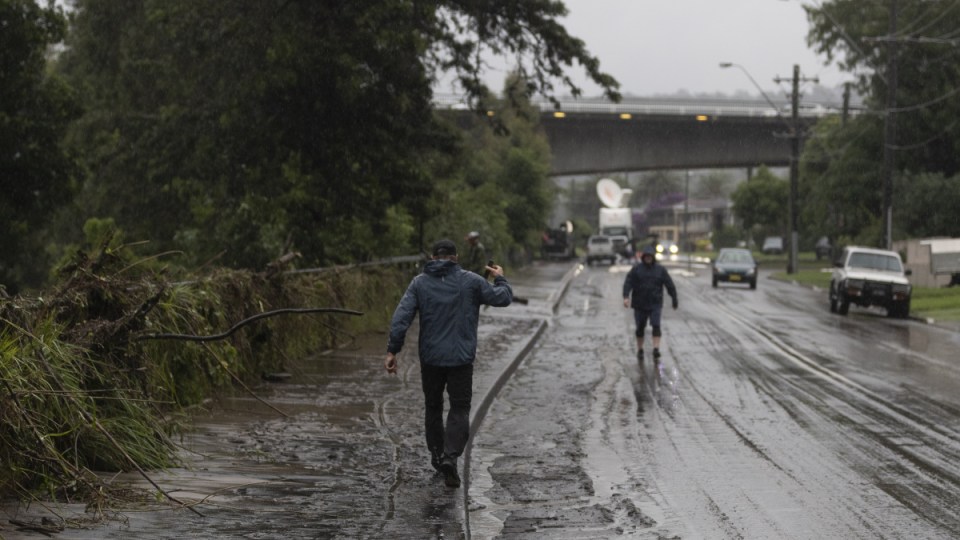 Flood damage in Penrith on Monday, after the Nepean River burst its banks and peaked at 10 metres on Sunday night. Photo: Getty

Thousands of people across NSW were grappling with the flood crisis on Monday morning as evacuation warnings remained for large swathes of Sydney and water continued to rise in regional areas.

The NSW State Emergency Service had evacuated 3000 people from the Nepean-Hawkesbury area north of Sydney on Monday morning, and a further 15,000 elsewhere across the state.

Premier Gladys Berejiklian said 19 evacuation orders had been issued across western Sydney and for the foot of the Blue Mountains, affecting suburbs around Penrith and downstream to North Richmond as the Nepean and Hawkesbury rivers peaked.

There are also alerts for the Illawarra and south coast, although most concern remains for the mid-north coast.

“Please be ready if you have been asked to be on alert, be sure you are packed and ready to go in case you need to be evacuated at short notice,” she said.

“It is obviously very scary for many people across the state today as the weather conditions continue … we expect heavy rainfall until Wednesday and a potential easing on Thursday but it depends which part of the state you are in.

“While in some parts of the state, the rainfall may ease it will exacerbate in others.”

Ms Berejiklian said it was a miracle there had not yet been any fatalities.

“I am so relieved, until this point in time no one has lost their lives, which is a miracle given what we have been through,” she said.

Prime Minister Scott Morrison called it a “testing time for our country”.

“It’s a matter of pulling through together once again,” he told 2GB radio on Monday.

Mr Morrison said defence helicopters and other resources were on standby, and promised federal resources would “move very quickly” to assist further.

“That will include logistics, obviously, assistance with making sure we make safe our communities,” he told Nine.

SES crews from Victoria and Queensland have also been sent to help in NSW.

Hundreds of homes have been damaged, including one filmed floating down the Manning River in Taree. Mr Elliott said it was only a matter of time until lives were lost too.

Hundreds of flood rescues have been conducted by the SES since the weather began last week, and each one brought the state closer to an “inevitable fatality” he said on Sunday.

Mr Elliott said the most critical area on Monday was the mid-north coast, where communities were facing the worst flooding conditions since 1929.

Port Macquarie restaurateur Nathan Tomkins said the past few days had been a nightmare roller-coaster.

After record flooding at the Hastings River at the weekend, Mr Tomkins’ restaurant was inundated with neck-high water. He said the venture he had spent 24 years building was in ruins.

“The water just went right through and just destroyed everything. There is nothing left,” he told ABC TV on Monday.

“This is just like a nightmare, it really is. I’ve got so many friends and family members that are just hurting at the moment from all this, who have lost their homes, lost their cars, lost their businesses.”

Much of the mid-north coast is bracing for more flooding on Monday.

“I’m feeling like I’m on a roller-coaster. I woke up this morning and I just pinch myself to go, ‘OK, this is not real’. But it’s real,” Mr Tomkins said.

Monday is expected to bring more rain as a deepening trough feeds more moisture across central Australia towards the east.

Flash flooding remained a serious risk for the northern rivers and mid-north coast on Monday and Tuesday, the weather bureau said.

There are similar risks for the Hunter and Central Tablelands districts, particularly as catchments are already saturated.

Since the heavy rain began, 450 gigalitres of water a day have been released from the Warragamba Dam – comparable to the contents of Sydney Harbour, which is around 500 gigalitres.

The weather bureau said flooding in parts of the Hawkesbury-Nepean River system through Sydney’s west had reached levels not seen since 1961.

Sydney is forecast to get another 40-70 millimetres of rain on Monday, while parts of the NSW east coast will get more than 100 millimetres in the next four days.

More than 200 millimetres of rain has fallen in some parts of northern NSW. The heaviest falls have been around Kempsey and Coffs Harbour on the mid-north coast.

A flood evacuation order has been issued for the Kempsey CBD and authorities are warning the town’s levee could be inundated after 177 millimetres of rain since 9am Sunday.

Across NSW, more than 130 public, independent and Catholic schools were closed on Monday, and SES Commissioner Carlene York said people should seriously consider working from home.

“Your office or area of work may be open but you may not be able to safely get to that and we do not want people on the roads,” she said.

The assistance is being provided through the jointly funded Commonwealth-State Disaster Recovery Funding Arrangements.

“The south coast will probably see the heaviest rain on Tuesday, and then on Wednesday, we will see a few lingering showers along the coast, but nothing much like what we have seen over the past few days.”

Further north, Queensland also faces dangerous weather, with storms forecast from the Sunshine Coast down to the NSW border on Monday.

“This weather event will hang around for the next three days,” QFES coordinator Brian Cox told Nine on Monday.

“The ground is already saturated so the risk of flooding is quite high.”

The Sunshine Coast is forecast to get more than 150 millimetres of rain in the next two days on top of the very intense storm activity over the weekend in the state’s east.

“It might not be as intense as our NSW colleagues are feeling at the moment but nonetheless quite dangerous,” Mr Cox said.