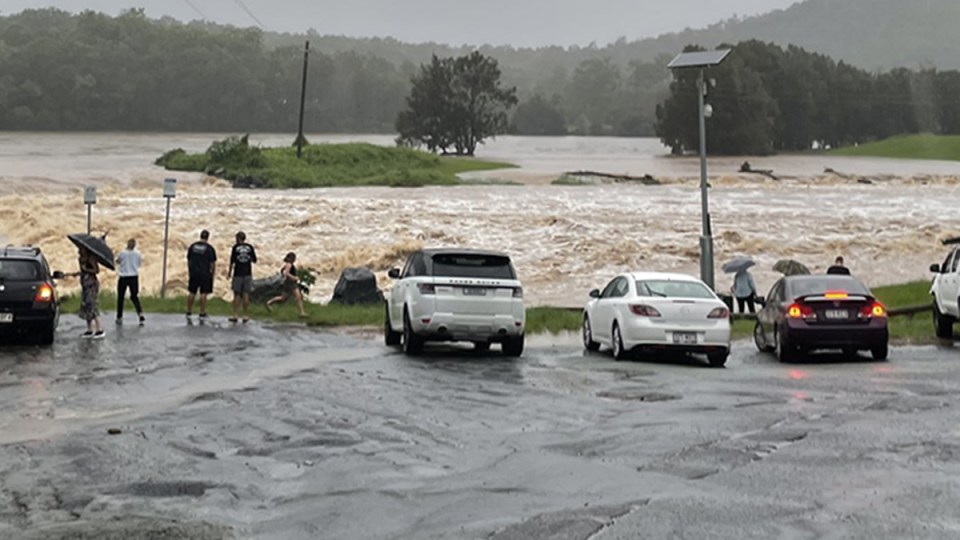 The Coomera River on the Gold Coast on Sunday afternoon. Photo: Twitter

Six people have been plucked from floodwaters in Queensland’s south-east after intense rain caused flash flooding across the region – and the danger is not over yet.

The State Emergency Service received 320 calls for help over 24 hours after a coastal trough dumped vast amounts of rain on the south-east corner on Sunday.

The Gold Coast and its hinterland were the hardest hit, with some rivers breaking their banks.

“There’s been inundation to homes, roof damage, trees down. Some of those calls involved multiple problems – water through the roof, coming up through the floor, trees down,” SES Queensland state co-ordinator Brian Cox said on Monday.

While the rain has eased, the Bureau of Meteorology has warned heavy falls are likely until Wednesday.

He pleaded with Queenslanders to heed warnings and stay off the roads unless travel was essential, and said anyone on the move must check road conditions and weather forecasts.

Swift-water rescue teams staged six dramatic missions on Thursday to get people out of life-threatening situations between Brisbane’s southern suburbs and the Gold Coast. Four of those rescues involved people stuck in cars.

“One person was in a car, and the water came up so quick he had to get out and hold onto a tree until swift-water crews could rescue him,” Mr Cox said.

“There were three people trapped in a car in the south-east that had to be rescued. There was even a hiker who went out for a walk and when they came back the small creek they’d crossed in the morning was a swollen river by the afternoon.”

Bureau of Meteorology forecaster Rosa Hoff said North Tambourine, in the Gold Coast hinterland, had 263 millimetres of rain to 9am on Monday.

Brisbane city and surrounding suburbs also had widespread falls of 100 millimetres, with the deluge extending to the north. Beachmere, north of Brisbane, got 208 millimetres.

“We all have a responsibility to make good decisions on the road to keep other drivers and ourselves safe but that is especially the case during extreme weather events. If it’s flooded forget it.”

Bulk water supply authority Seqwater said the Poona Dam was spilling into the Maroochy River on the Sunshine Coast.

“If you are downstream of the dam, please avoid potential hazards such as fast flowing or deep water near waterways and flood plains,” it said in an alert on Monday.

“These hazards potentially threaten the safety of you and your property.”

The Leslie Harrison Dam at Tingalpa, on Brisbane’s bayside, has also started spilling.