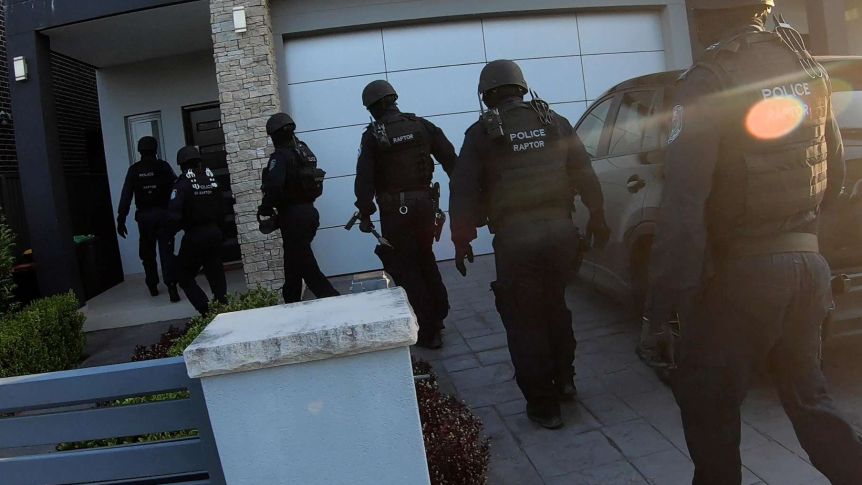 NSW Police have declared war on two rival crime families after a spate of shootings, including the murder of Mejid Hamzy, in Sydney’s south-west.

The younger brother of Brothers 4 Life leader Bassam Hamzy – who is serving time in jail for murder – was killed near his car at Condell Park last week.

The father, 44, stumbled for about 200 metres before he collapsed and died in a pool of blood near the front door of his Simmat Avenue home.

Two men have been on the run for more than a week after setting fire to their getaway car only streets away from the crime scene.

Investigators have issued Public Safety Orders, banning 22 people – mainly friends or members of the Alameddine and Hamzy families – from moving across parts of Sydney.

The Alameddine family and some of their associates are prevented from going to suburbs such as Condell Park, Blacktown, Rooty Hill, Mount Druitt, Parramatta, Westmead, Merrylands and Greystanes.

The Hamzy family and some of their associates are banned from going to some suburbs between Sydney Olympic Park stretching south to Picnic Point, as well as Clovelly and Bronte in the city’s east, and Sans Souci, Dolls Point and Sandringham in the city’s south.

The orders were enforced at the weekend amid police fears of revenge attacks.

“I am sure the community are sick of these crime groups using our streets and our homes as shooting ranges,” Detective Superintendent Robert Critchlow said.

“We have people dying in the street, we are sick of it.”

Public Service Orders last only 72 hours so investigators are taking their fight to court to apply for Serious Crime Prevention Orders, which last up to five years.

SCPOs are rare, but Strike Force Raptor detectives did use them amid escalating tensions between the Finks and Rebels bikie gangs in Newcastle several years ago.

Investigators are trying to work out whether a brawl between the Hamzy and Alameddine families might have led to the murder of Mejid Hamzy.

They are also looking at a brawl in which his cousin, Mohammed Hamzy, was stabbed with a metal shiv by another inmate at John Morony Correctional Centre near Windsor.

Police are hoping the new orders will put pressure on associates of the rival families to provide them with information that could crack the case.

“We will not stop in our pursuit of these reckless and careless individuals who continue to put the community at risk and if you are involved, wherever you are, whatever you are doing, it is best to assume we are watching your every move,” Mr Critchlow said.

Individuals who break either of the orders could face five years in jail or a fine of more than $165,000.